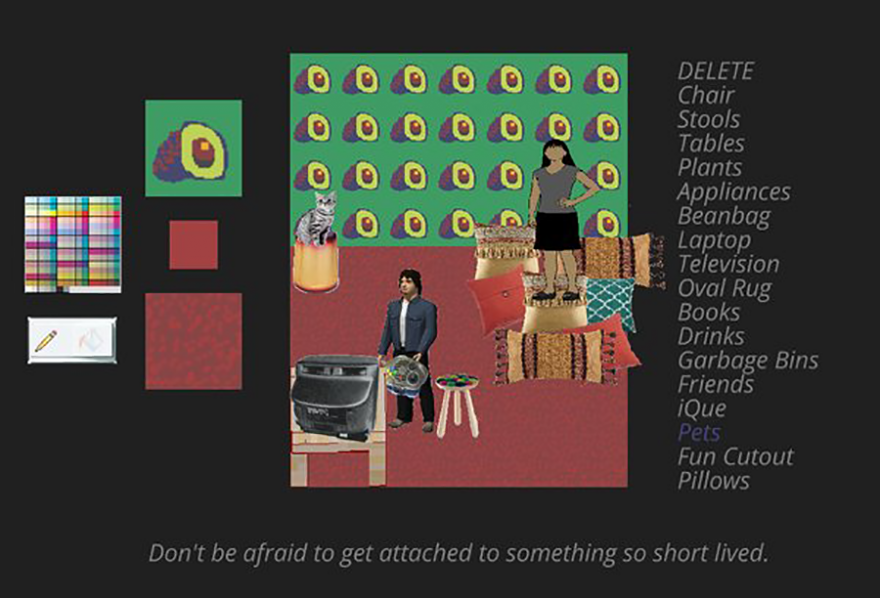 One of my most played games of last year was the simple and charming Animal Crossing: Happy Home Designer, a game in which you designed houses according to the fancies of cutesy animal citizens. Happy Home Designer was released to a wash of lukewarm reviews, nearly all resounding with the common criticism of the game befalling no risk or reward. I agreed with these grievances, but somehow still found myself coming back to it night after night for a few months. Happy Home Designer became my nightly relaxing retreat from reality. In game developer Todd Luke’s recent Flash game, Shabby Home Designer, the serenity of designing a living space is replicated. Except in this instance, it’s really anything from happy.

Nothing looks straight out of an Ikea catalogue

Shabby Home Designer is a barren Flash game. The game was created “over the course of a few days,” according to the game’s description page, with most of its assets nabbed from Google Images and YouTube. The player cycles through furniture to place in their home and has the option to flip through additional options, such as a giant flan for a stool. The player can also color coordinate and draw tile that’s repeated for the floor and ceiling, similar to the patterns that can be easily created in Animal Crossing.

The thing that differs is that everything is, well, shabby. Nothing looks straight out of an Ikea catalogue, perhaps least of all your low-poly “friends” that you can place throughout the room. The rooms the player creates can take any rickety turn: be neatly organized but bland, or bustling with overflowing garbage and bugs. Shabby Home Designer gives the player full reign over creating their own dilapidated fantasies. It’s the Happy Home Designer for the browser-bound, obscure Google Image-savvy fan.

Flash games aren’t a new venture for Luke, with plenty of other like-minded, oddball browser games under his belt. Included in the breadth of other Flash games are Entomo, a game about exploring the base of a tree as a rolling orange ball afraid of bugs, and Space is Red, a bite-sized sci-fi game that oozes with cyberpunk coolness (thanks in part to its dope music). Luke is a prolific game developer, and his itch.io demonstrates the risks continues to take, and Shabby Home Designer is not lost among them.

Play Shabby Home Designer here in your browser and design derelict rooms to your heart’s extent.