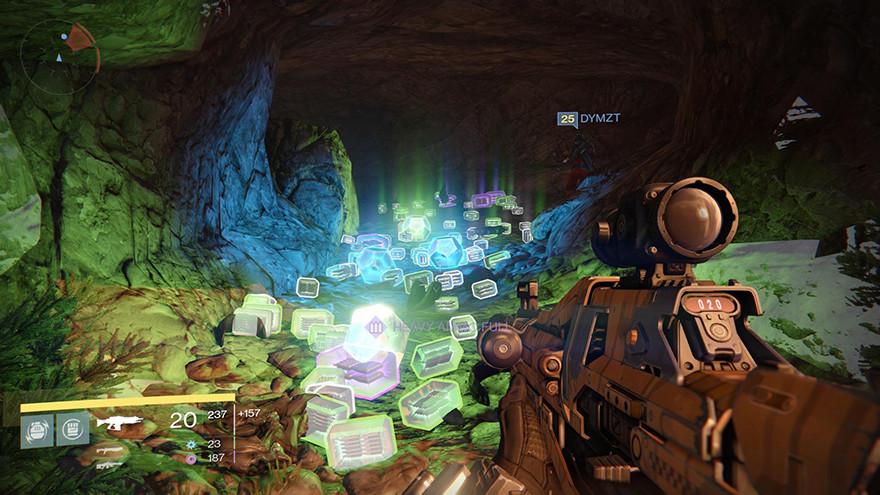 If there’s one thing Bungie has kept saying about Destiny, it’s that “the real game starts at level 20.” They said it months ago. They said it again when the game came out. They retweeted someone who repeated their slogan. Their talking point migrated into reviews, too.

But the real game you begin at level 20 looks suspiciously like the unreal game you were playing before, which was perhaps a prophetic dream or vision of the future. You replay the same Strikes (dungeons), which mostly share the same structure anyway, as if half the class copied one designer’s homework. As the levels climb, the enemies get healthier and your guns get deadlier and it mostly feels the same as ever.

There’s nothing new to do from levels 20-26. It’s a desert. Players get through by grinding reputation or literally walking in circles to farm upgrade materials. It’s no wonder many people preferred to fire for hours into a “loot cave” full of quickly respawning low-level enemies, or farm enemies at mission checkpoints.

Last week the powers that be closed down the loot cave in Old Russia, and some players got so upset that they’ll probably write a folk song about it. But the rate of spawns at certain caves isn’t the real issue. In any game with sensible loot, there would be no incentive for endgame players to stomp enemies in the starter zone. They would drop starter items.

Outside of the game’s single raid, pretty much everything in Destiny appears to share the same loot table. Soft-skulled Vandals in the starter zone seem to cough up Legendary engrams at the same rate as their hardened counterparts in high-level Strikes. I don’t know why Bungie chose to depart from classic risk/reward structures, but they created a game full of fish-snipers looking for a new barrel.

If there’s any point in Destiny where “the real game starts,” it’s level 26. You have to walk through a mile of shit to get to it, but the Vault of Glass raid is by far the high point of the game. In most respects it is a different game: the loot makes sense, players talk to each other, and Peter Dinklage never says anything. The boss fights are a feast of MMO mechanics unseen in the rest of the game, from debuffs and cleansing effects to enrage timers.

All of the adventure you can find in Destiny is there in that raid. Learning how to cleanse your team with the shield relic. Taking a long plunge off a high cliff and air-braking at the last second. The electronic honking of the gorgons in the stealth section. Watching people plunge to their deaths in the jumping puzzle. That teleporting bullshit the final boss does.

But the “real game,” at least for now, is just that 2- or 3-hour dungeon. The six-level stretch of boredom that precedes it is a steep price for admission. And Bungie have not even built matchmaking for the raid, the best part of their game, making third-party sites necessary.

Their excuse—that Vault of Glass is too hard for pick-up groups—doesn’t wash now that the fights have been studied and broken by the internet. You can even solo one of the bosses, as I did once after my group dissolved for the night (not my video, though). Meanwhile in Azeroth, raid matchmaking has been a thing for three years.

Adjusting spawn timers is a good idea. Making the Cryptarch less miserly could help. But Destiny needs overhauling, not tweaking. It needs much more content and much less grind. Bungie keeps saying it will get there. I remember when they talked about fixing the voice acting, too.