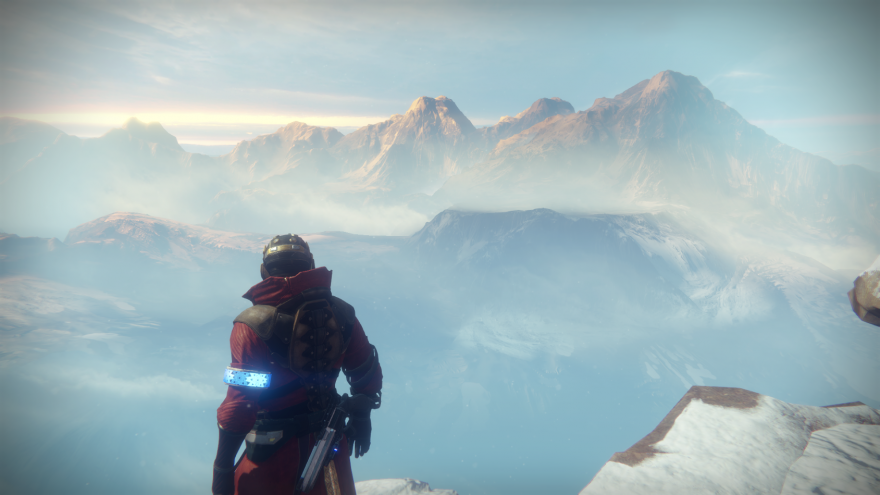 I was at E3 when Destiny was first shown to the world in 2013. I remember being shepherded into a theater, the outside marked with huge printed artwork, among a group of whispering journalists. In that theater, we would be taken through the opening to the game: the wall, the breach, the first areas of the Cosmodrome. The person demonstrating the game spawned at what I now know—after hundreds of hours in Destiny’s world—to be the hard edge of the map. But back then I had no idea where this sprawling landscape ended, where its invisible walls lay. So as they carefully rotated the camera to face away from the level, pointed to a shape on the horizon and said something like “you can climb that mountain,” I guess I believed him. “This is all playable terrain,” he added, gesturing to what I now know to be little more than a backdrop.

This feels like one of the most audacious lies I have encountered in my time covering games. Its audacious because the person who delivered it must have been completely aware that, not only was that not playable terrain, but that there was no plan to ever make it into playable terrain. It was also an oddly unnecessary lie; the game was impressive enough as it was, why not let people assume that this beautiful vista is theirs to explore? Why lie? It’s almost as if the demonstrator was operating on autopilot, cracking out the age-old PR line of “see that mountain, you can climb it!”—a line that has become a kind of running joke. Or perhaps that was just the atmosphere surrounding Destiny at the time; that it could be unbelievably vast, beautiful and filled with promise.

I had forgotten about much of this before the release of Destiny’s most recent, and perhaps final expansion, Rise of Iron. Structured around the Iron Lords, the strangely medieval-themed band of warriors that predated the player’s guardians, it is the backward-facing bookend to two years of Destiny grind. Consisting of a handful of missions laid out in a slight campaign, a new area to patrol, another more truncated raid and the usual handful of multiplayer maps, loot and items; it is a slimmer package than last year’s The Taken King, though it imitates much of the same structures. There is the Archon’s Forge, an analog to the group battles of The Taken King’s Court of Oryx, as well as a set of collectibles linked to lore, much like the Books of Sorrow. However, unlike The Taken King, whose infusion of narrative into every activity and sense of mystery invigorated Destiny, Rise of Iron has the feeling of being a dulling second run for these ideas, less interesting and more dysfunctional than before.

That idea of a return seems central to Rise of Iron as it cack-handedly attempts to gather together two years of u-turns, revisions, confusion, and frustration into a legacy. The first mission in Rise of Iron, for example, has you climbing a mountain, one tellingly situated in the general area indicated by the host during that E3 demonstration more than two years ago. It’s hard to tell if this an ornate in-joke, an attempt at reparation, or a thoughtless coincidence, but looking back at the game’s history it’s quite possible that it might be all three. Being a regular Destiny player over the game’s life up to this point has meant watching as Bungie tried to hammer systems unfit for their purpose into some kind of shape, struggle with providing enough for its eager players to do, and roll out “quality of life” updates that exchanged one thankless grind for another. When The Taken King released last year, I called it their “grand correction,” an expansion that seemed like Bungie finally getting hold of what Destiny was, and starting to move this tanker-like behemoth against the inertia, turning it in the right direction. I also predicted that the year ahead would be a tough one for Destiny post-The Taken King, with a need to capitalize the plot lines and systems it set up, to make the most of this renewed sense of direction. What I hadn’t predicted was that Bungie would near-abandon Destiny over the next year, to be run by a skeleton crew with the absurd objective of treading water for an entire year.

This skeleton crew, the “Live Team,” collapsed the progress made in The Taken King with a series of empty fan-baiting events. The Sparrow Racing League brought Wipeout-lite racing to a game that didn’t need it, and the Halloween themed Festival of the Lost and the totally misjudged Valentine’s Day tie-in Crimson Days provided empty scavenger hunts wiped clean of any narrative implications, plot-lines, or lore. It was as if Destiny was masquerading as an MMORPG, like World of Warcraft (2004) or Guild Wars (2005), offering the same easter egg-like events but without the core of a rewarding, rich world to place them over. Beneath this tacky sheen Destiny festered, its player counts tumbling as content grind became overwhelming. What was supposed to be a return to glory, heralded by The Taken King, became a march of attrition, as Bungie struggled to trickle out the bare minimum amount of content players needed to stay interested. Perhaps that was because, after the clear success of The Taken King, Bungie instantly isolated its core team (headed by two of the remaining Bungie veterans not wiped out by the studio’s painful process of birthing Destiny into the world—Luke Smith and Mark Noseworthy) and set them to work on next year’s worst-kept secret, Destiny 2.

Rise of Iron is the bitter cherry on top of that year of dangling plot threads and empty experiences. It takes nostalgia as its refuge, attempting to gather up the last positive feelings players have towards Destiny and weaponize them. One quest sees you gathering the pieces of the Gjallarhorn, the exotic rocket launcher that, when sold by the merchant Xur in 2015, sent the fanbase into a frenzy. A new version of the first strike mission you encounter, “The Devil’s Lair,”  has a fan’s heavy metal cover of the theme over the boss fight. Another has you rebuild the first gun you ever received in the game, the Khvostov, by gathering pieces across a changed version of the opening areas to the game. This quest ends with your Ghost companion asking you to take in the view with him, delivering this saccharine monologue:

“On the inside, I’d always known who you were and that together, we could be something more. When you think about everything we’ve seen, everything we’ve done I feel like I’ve made the right choice.”

Even if these could be construed as affectionate touches from a studio to its fanbase, this territory feels so worn out by now that these moments only instill a sense of being emotionally manipulated. It perhaps doesn’t help that Ghost doesn’t even have the same voice actor as he did when we started, or that most players have clocked so many playthroughs of the Sepiks Prime boss fight that it is little more than a series of audio-visual cues leading to a loot drop. But Rise of Iron isn’t interested in these experiences, or in charting the true history of Destiny. It merely seeks to keep its fanbase ticking over, to salvage as much good will as possible for that final push towards Destiny 2.

it almost tricked me into believing

If this sounds overtly cynical, perhaps it’s because Rise of Iron, rather than reminding me of days of glory, has instead reminded me of all the ways in which Destiny’s incoherence has undermined its ambition. We might start with that mountain comment, but we could just as easily point to Rise of Iron’s mention of Rasputin, the AI warmind, whose plot was severed in the original campaign and despite teases in subsequent expansions, remains lost in reams of nonsensical suggestion. Or we might turn to the new patrol area, The Plaguelands, which inadvisably ditches the density and tight design of The Taken King’s space dungeon, and returns to the empty, limited spaces of the original game’s patrols, filled with repeated enemy groupings and little else. Even the campaign, headed by Lord Saladin and his unremarkable scout Shiro-4, seems to return to the days when Destiny was portentous, humorless, and run through with a streak of military dullness that discolored its beautiful space-opera worlds. The voice acting and writing may be the worst Destiny has offered so far, without even the comical absurdity of “that wizard came from the moon!” or “I don’t even have time to explain why I don’t have time to explain.” It’s not that Rise of Iron’s “knights of the round table” meets self-replicating machines idea doesn’t have potential; it’s that its execution is so without humor, energy, or passion.

Clayton Purdom’s 2014 review of Destiny was titled “I Still Believe in Destiny.” Even now, belief feels like an important part of being a Destiny player. Destiny is a game that blends the optimism of its music, of its narrative, of its space-opera setting with the seemingly unending optimism of its players. Even in its worst missteps, it has always contained a strange grain of hope, the sense that it could be something special if it could wrestle itself free from the convolution of its systems, narrative, and economy, and ascend to something greater. I still hold some of that belief, but more and more I can only see Destiny as something that is purposefully tunneling deeper into that convolution, wrapping itself in ever increasing layers of dysfunctional economics, broken grinds, and fragments of storyline. Perhaps Destiny 2 will be its chance to start anew, to clean the slate of all this mess, yet the fact that I am suggesting such a thing only points to the hold the game’s “ever-forward” philosophy has on its players. Rise of Iron turns to a fictional past in the hope of finding the energy to drive towards this bright future, but in doing so it only highlights the instability of its foundations. 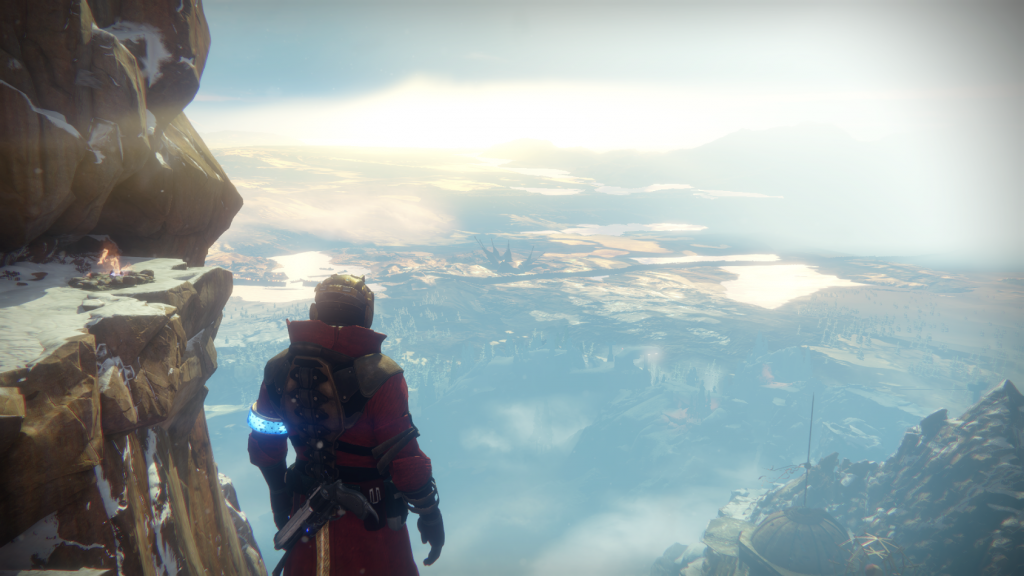 In a detail that I can only laugh at, my most enjoyable time spent with Rise of Iron was in fact spent climbing a mountain. The expansion’s new social space, Felwinter Peak, has a hidden route of precarious rocks that can take players to a hidden, higher summit. I must have spent nearly an hour wrestling with the game’s bizarre and broken jump, tumbling down the mountain to repeated deaths in a comical fashion alongside a handful of strangers. It was so unexpected, so surprising that it ignited something in me, something that found satisfaction in breaking out of the straitjacket of the game’s grind and doing something that felt like breaking the game. Invisible walls are so prevalent and disappointing in Destiny, and so to seemingly pass through one on an ascent to an unknown peak felt new and exciting. I eventually made it to the top, and, standing by a fire on a small rock shelf, I looked over the landscape in all its beauty, snowblown and windswept, dappled by clouded sun and glowing with the fires of some dark project. It was just a backdrop, a suggestion of a place that will never be fully realized. But it almost tricked me into believing, into hoping that one day I might go down there, into the valley and find what I have spent all these hours looking for.

Though, I am starting to wonder if I, or Bungie, would know what that looked like, even if we found it.