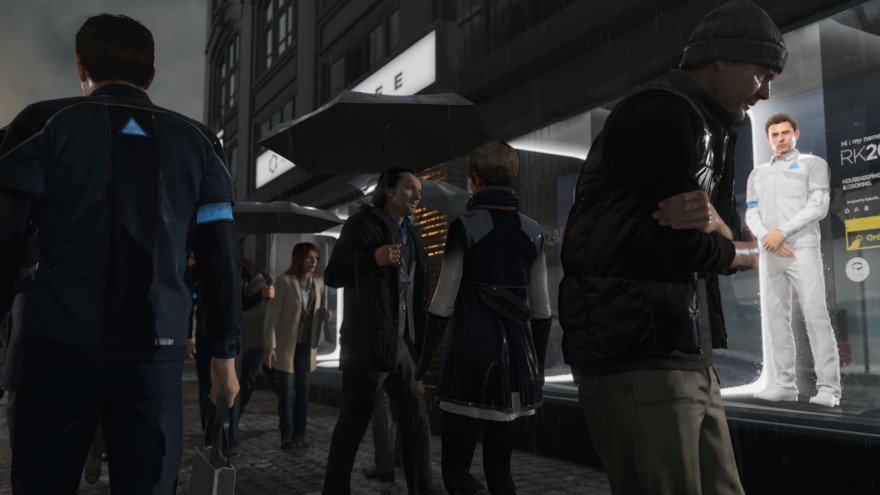 David Cage, the game developer equivalent of an ex-boyfriend who refuses to accept you’ll never love each other the same way again, announced his next title at Paris Game Week yesterday. Coming off the heels of Indigo Prophecy, a game often touted as ahead of its time, and more recently Beyond: Two Souls and Heavy Rain, games often touted as generally pretty useless, Cage released a conceptual trailer for a project he’s calling Detroit.

Okay, that’s not the full title. The full title to David Cage’s next game is cringingly—no, sickeningly—Detroit: Become Human. Originating from the 2012 tech demo called Kara, Detroit will continue the story of a female android who accidentally develops sentience somehow. The trailer hints at a sci-fi story involving robot rebellions and, as Cage says, questions about “what it means to be human.” There’s no set release date for the game, but it claims to be a PS4 exclusive.

The most interesting part of this announcement, though, isn’t really the game itself. Because the media coverage for Detroit: Become Human has been—well—decidedly “meh” about the whole thing. The Verge describes David Cage’s past titles as striving “to be emotionally poignant yet often [struggling] to hit their lofty goals,” conceding that, regardless, “that won’t stop director David Cage from trying.” The Verge also wagers you can bet “there will definitely be a few moments that try to make you cry” in the newest game.

“Quantic Dream and Cage are known for attempting to tell ambitious stories,” says Venture Beat, “but as we saw with Heavy Rain and Beyond: Two Souls in the PlayStation 3 era, their end product doesn’t always meet their ambitions.” Which, for Venture Beat, is a positively scathing remark.

In fact, from what I can tell, the most enthusiastic response to the announcement of Detroit: Become Human comes from Cage himself:

“Many people were deeply moved by [the original Kara] and felt empathy for this character who just wanted to live,” he explains on the PlayStation Blog. “But everyone had the same question: what happens to Kara when she leaves the factory? I kept asking myself the same question since we released this short. I knew I had to find out!”

But, oddly enough, Cage isn’t totally wrong. There were some genuinely interesting ideas in the original tech demo, Kara, (though those ideas were also not immune to the usual so-on-the-nose-it-hurts David Cage-ness). In the original, a feminist undertone characterizes Kara’s “birth.” She becomes sentient only to learn that her body is to be bought and sold to the highest bidder. She is like Eve, discovering herself for the first time in a watery reflection in the Garden, only to be interrupted by God and told she is subservient—the bone of another, a reflection only meaningful insofar as it reflects man’s greatness.

In the trailer to Detroit: Become Human, a half-assed allusion to slavery is attempted instead—I think? (I hope not, but I think so.) With the title’s uncomfortable juxtaposition of Detroit—a city known for its history of race riots and current race-related drug, education, and housing problems—and the tagline “Become Human,” coupled with the heavily implied metaphor to slavery, Quantic Dreams appear to be drawing unavoidable parallels. Or, actually, I don’t know what would be worse: if Cage genuinely does not see the racial lines he is drawing with Detroit: Become Human, or if he genuinely thinks drawing those comparisons is a good idea. Regardless, the number of white robots being subjected to robot slavery/racism in Detroit makes me uncomfortable.

In the end, however, all is speculation this early in the game. For now, I’ll save my outrage for when the inevitable Kara shower scene becomes a controversy.