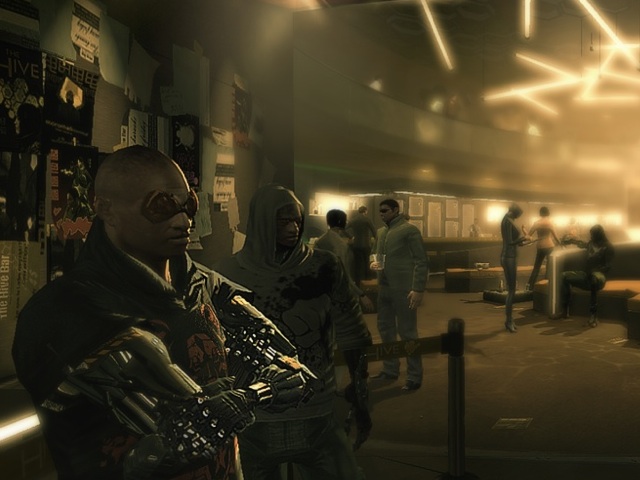 So many videogame to film adaptations end up in the dustpan that we wouldn’t blame you for not taking seriously the big-screen version of Deux Ex: Human Revolution. But, it sounds like the film will soon be going into production, so we felt free to speculate. What I’ve come to realize is that there is a strange triangulation between cyberpunk, videogames, and film.

Here’s the problem. As painful memories of the Matrix sequels and The Lawnmower Man remind me, cyberpunk films are often terrible. And has there ever been a decent movie about games, aside from the many awesome game documentaries? At least, Deux Ex’s top dog Scott Derrickson (whose résumé as director includes the unmemorable The Day the Earth Stood Still and the straight-to-video Hellraiser: Inferno) is aware of the situation. Speaking with Crave Online, he admitted:

It true that both cyberpunk and games are notoriously difficult to adapt to the movie reel, but what gets me is that videogames and cyberpunk translate so well to each other. There are plenty of fantastic cyberpunk games. Just to name a few, there of course is Deus Ex and its sequel, there’s Tron, System Shock, Syndicate, Shadowrun, Neuromancer, Rez (!!!), I Have No Mouth and I Must Scream, Analogue: A Hate Story, and more than likely, the forthcoming Cyberpunk 2077 will be great too. These are paramount titles with an incredible amount of cachet. More surprisingly, there are a few iconic cyberpunk books that involve game stuff, namely Snow Crash and Neuromancer. (Remember Linda Lee, Chase’s girl from the arcade?)

But when you look for great cyberpunk movies, the pickings are slim. There’s Blade Runner and The Matrix, and if you want to get esoteric, you could go Japanese splatter with Meatball Machine. But the Tron remake was mediocre, and the original is laughable these days. And for the record, I don’t think La Jetée counts. Is THX 1138 considered to be any good?

This seems paradoxical to me that both would translate so well to each other but neither to the screen. But perhaps it’s not mysterious. It could be they’re easily transposed because cyberpunk is about hacking artificial intelligences and existing in virtual worlds and wearing mirrorshades — in other words, interacting with technology. Games are about that too. They’re of the same ilk. Going to the movies is sitting back, passively engaging, and taking it all in.

To say the least, Derrickson has his hands full.