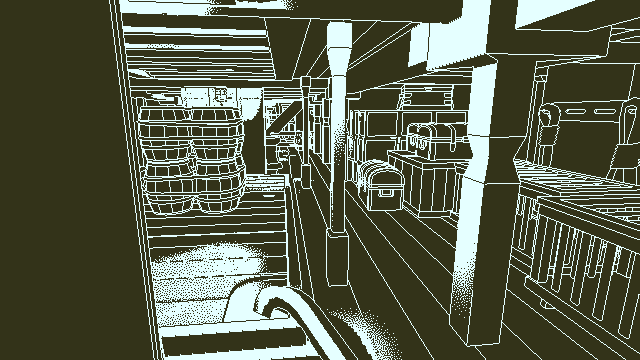 It’s been a year and a half since Papers Please (2013) creator Lucas Pope first announced his nautical mystery game Return of the Obra Dinn, releasing a small demo of the game for players to try for free. Like many demos, it offered a vertical slice of the game’s typical routine, helping to embody what the full game might eventually look like as a whole. However, while working on a new demo to show at this year’s GDC, Pope found that his original vertical slice “did not scale up (at all) to making a full game.” As such, he’s taken to his devlog to give readers an honest, firsthand experience at some of the unexpected difficulties creators come across while making games.

“Something that bothered me during this 1.5 months of democrunch was just how much fucking work I was doing just to get back to the level of functionality the old development build had, 1.5 years ago,” he writes. “This is something I’ve experienced before – kicking out a solid vertical slice in X months, then breaking everything badly while scaling up the tools/pipeline/systems for the full game.”

A before/after shot of the game’s upper deck

Pope explains that, since beginning work on the full title, the tools he used to build the demo haven’t held up to the increased needs of the full project. New game features wouldn’t work with old programs, he had to write a new lighting engine from scratch, he needed to purchase an upgrade to his animation software, and “a lot of random stuff broke.” As he explains, “The current GDC demo isn’t clearly 1.5 years better than the old development build.”

Still, for Pope, his difficulty with tools was simply emblematic of a larger problem. “Looking back at all these problems, it’s easy to blame the tools I’m working with,” he writes. “But I think the real issue is just with how I build games.” According to Pope, while it tends to be easier to avoid these problems by building games with a clear plan in place first, he prefers to work in a looser style, tweaking and redesigning aspects of the game as he builds them. “There’ve been several times when I sat down and said: ‘ok, plot out the whole game so I know what to build,’” he explains. “Only to give up and go back to noodling on some small thing.”

the real issue is just with how I build games

Despite this, the results of his work still show marked improvement over the original. The ship the game takes place on now has full masts and sails, complete with movement in response to wind and other environmental factors. The ocean is fully animated. The characters are now wearing clothing rather than having it built into their models. He’s even added in multiple color schemes meant to pay homage to different one-bit computers, expanding the game beyond the black and white of the original build.

For all the difficulty Pope’s encountered, Obra Dinn seems to have only grown since we’ve last seen it, even if it’s pulling into port a bit late. Pope is currently busy fixing one last graphical issue with the GDC demo, after which he plans to release to the public. Until then, you can follow Pope’s work over on his website, and read Pope’s devlog here.