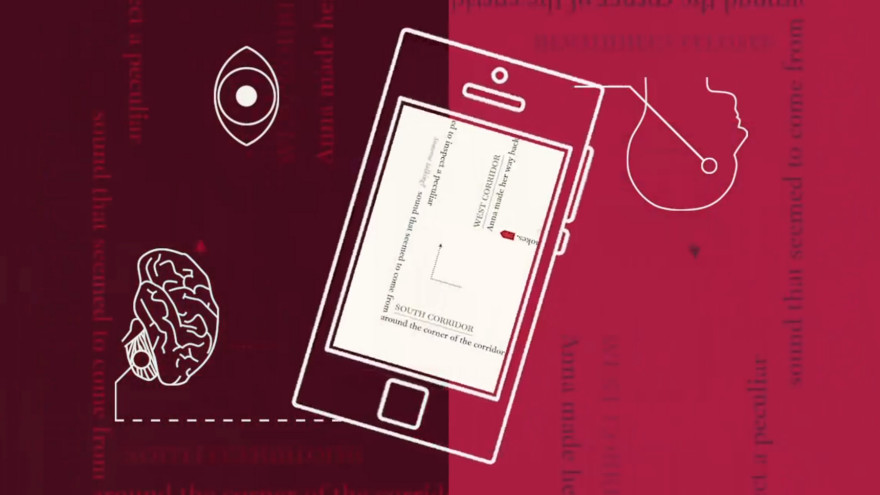 The first image at battlefield.com features a dozen heavily armed people looking for something to kill. The first screenshot at the DEVICE 6 website is a paragraph describing a bookshelf. It’s hard to find a simpler expression than that of what DEVICE 6 wants itself to be: a text. “The written word is your map, as well as your narrator,” Simogo explains. “DEVICE 6 plays with the conventions of games and literature.” “Literature” does not feature in the lede of most game descriptions. But as soon as you start playing, it becomes clear that we’re meant to feel like this is a game about reading.

And it is, at least, made of reading. At the core of the gameplay sits a mechanism of dancing text. In essence, you play DEVICE 6 by reading a novella about a woman named Anna–only the text of that novella is agile. It moves with the story, paralleling Anna’s actions. As she moves forward, the sentence moves offscreen, and you in turn scroll to follow it. When she turns, the sentence turns, and you rotate your device. When Anna is stuck at a closed door, the text stops, and you—and Anna, and the text—must backtrack to find a way to open it.

At the core of the gameplay sits a mechanism of dancing text.

As someone who loves screwing around with text, I heartily approve. The form changes neatly to match the narrative, and the whole thing is beautifully designed. The movement is comfortable and natural—even if unconventional—and it is all paired with artful sound design. The device offers a novel and engaging way to travel what is by now a deep-hewn path: the locked-room escape.

But it isn’t what the game is about.

The nature of genre is to establish conventions, and the locked-room escape is one of the more opinionated genres. The sense of isolation, of confusion, the more or less total absence of context. The surreal unpredictability. The understanding that things here simply do not make sense, and that all there is is escape.

DEVICE 6’s gameplay is at times deeply creepy. The castle(s) in which Anna is trapped are full of the expected madness—a paddock of sheep watching a Dharma-style slideshow of tangrams, e.g.—but surrealism is not best suited to text. But in those moments least describable, DEVICE 6 will always offer an image, a recording, a voice, a flickering light—and so DEVICE 6’s well-orchestrated interplay between sound, image, and story pushes the hazily surreal island from odd to unsettling.

Implicit in the genre is the assumption that some unknown force has orchestrated all this madness, and DEVICE 6 gives us glimpses at that force. Anna’s story is oddly pockmarked with bowler hats–here on a half-glimpsed figure in the woods, there on a sad elephant–and by ubiquity we come to realize that the shady doer behind her imprisonment is some sort of corporate entity calling itself HAT. The hipsterish frivolity of the name–the suggestion of an all-powerful group of insane haberdashers–belies our assumption that there may be method to this madness.

We are lost with Anna in a world that we cannot trust, and DEVICE 6 expertly exploits our disorientation. But this, too, isn’t what the game is about.

Device 3: The Voice of HAT

In between chapters—when Anna is offscreen, traversing the vestibule between two madnesses—is where the game really lives. This is not immediately apparent.

In between chapters, we begin to see the solicitous, oil-slick voice of the corporate representative, asking us questions about our experience. Would you kindly rate the interactivity in the previous chapter? How about the production values? Would you take this short quiz about the details of the story?

And it feels right. It feels normal. A bit silly. But we’re never quite certain what’s a joke. Or what questions will affect the outcome of the game. For the most part, we assume that we’re merely stopping over to answer a short survey as the next chapter loads. Our corporate correspondent—fictional or otherwise—simply wants to know what we think. But at some point, we begin to suspect the identity of the friendly voice on the other end of the line–to catch a glimpse, that is, of the hat behind the curtain. Launching the game after having completed the story, you realize: the lies started right away.

Before you begin playing, DEVICE 6 furnishes fine print, as so many do. “This game is only playable with sound switched on,” it tells us. And then below: “Before playing, please read the software license agreement and the DEVICE 4 manual for important information about electromagnetic waves.” It almost feels plausible—after all, half the games I play remind me that they might give me seizures—but then, the game didn’t come with a manual, and then again, this is DEVICE 6, not DEVICE 4. But it also raises suspicion. This big a typo, this early? Electromagnetic waves?

Each interaction with it will make you a little less certain of its intentions.

But it is not an error—or, not exactly. You’re holding Device 4. It’s in your hands. Your phone has been conscripted by the game on the first screen. It is no longer your ally. It is Device 4, and it is a confederate of your enemies. Each interaction with it will make you a little less certain of its intentions.

That smooth corporate voice on the other end of the surveys has many small requests. Simple things. Things you can do with your Device. For research. To improve your experience!

Hold the phone up in front of your face, please. So we can identify you. Don’t worry, it won’t hurt! Well, of course it won’t. And after all, my phone has a front-facing camera, right? More than one game has asked me for my picture. And so I do.

Set the phone down on a flat surface, please. For calibration. You wouldn’t want to play uncalibrated, would you? Well, who would? And after all, my phone has an accelerometer, right? And more than one game has asked me to calibrate it. And so I do.

Device 5: What We Do Not Know

It should not be surprising when those requests become surreal. Which insect best represents this chapter? Hold your right ear. Now, which insect best represents this chapter? Place your finger in this circle, for calibration. Now do it again, so we can read your mind. It creeps up slowly, the insanity. And this is really what DEVICE 6 is about: the fragility of reality.

Because I know, of course, that my phone can’t read my mind. I know that holding my right ear will not change my opinions. But my phone—or rather, at this point, Device 4—can see whether or not I’m holding my ear. It knows where I’ve placed my finger. If it can casually detect tiny disruptions in the local electrostatic field, how much more implausible is it that software might interpret that data differently, however absurdly?

If I lay it flat for calibration, did it check the accelerometer? How could I tell? If it knows that I did, will it hold on to that information? Will my obedience to its absurd demands affect what happens to Anna?

As soon as my phone becomes Device 4, I become completely unsure of which questions matter and which don’t, of which absurd requests are part of the game and which aren’t, of what will affect the outcome and what won’t. Because it’s all possible, even my suspicion is suspect.

Looking back, Anna’s story—or at least, Anna’s story as it’s supposed to play out, the story as imagined by HAT—is about the death of doubt. Anna’s story as it plays out is more complicated. By the end, it is uncertain how much it matters what we doubt or believe, what truths we accept or decline. What we experience in the game and what we believe about it becomes more, and more jarringly, divergent. And as the story raises those questions, the devices of DEVICE 6 are revealed as co-conspirators. The text, my expectations, my corporate interlocutor, the device, my doubts—they are a network of devices, opening Anna’s world to me even as they occlude it. The beauty of the game is an emergent phenomenon, arising from the collision and collusion of these disparate elements, a collaboration of devices across (at least) two realities.

A screenshot of a paragraph describing a bookshelf seems more and more to be a perfect description of DEVICE 6. Meaning at a remove. Text obscuring content. Ideas mitigated by technology. I am less certain than before that Simogo’s use of the term “literature” is overstepping. DEVICE 6 is a remarkable game. As puzzlers go, it’s well made and challenging. Its story is interesting, and its style is engaging. It’s got a good beat, and you can dance to it. But I think it is also thesis on the dissolution of meaning. I think it is an artfully orchestrated study on technology as agent of semiotic entropy. I think it is a story of the ways in which our own devices slowly erode our ability to trust what we know and experience.