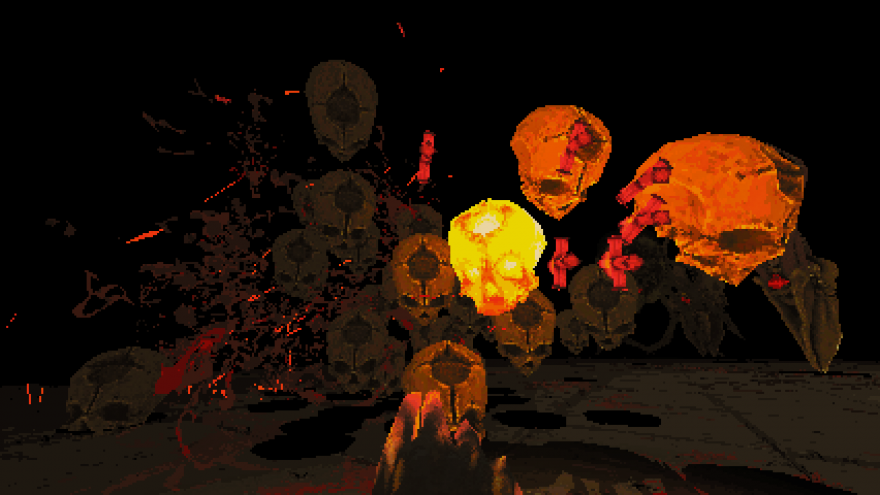 To play Devil Daggers is to die again and again. Anguish is constant.

It’s never clear what the player has done to be locked in this eternal struggle. Every playthrough opens with a darkened room except for a single source of light, a floating blade. Touching it is apparently a damning offense, and that’s when the horrors begin.

Rounds can last mere seconds, missteps compounding upon each other until you’ve found yourself knee-deep in the undead, where inscrutable tentacled horrors are eager to feast on the living. Swarms of chattering skulls are belched out of tentacled turret-like floating pillars. Skull-backed spiders the size of a Volkswagen reach out to grab your face, and massive, flying centipedes crafted of bone erupt from the ground once things really heat up.

The ever-increasing wave of satanic creatures cascade on top of the player on a single platform, cloaked in darkness. Gurgling groans like the churning stomach of the underworld swirl around your ears as you dance through eldritch horrors and clattering bones, flaming daggers leaping from your fingers. This is where you’re going to die. Repeatedly.

It’s arguably the most consistent depiction of hell in videogames ever created. Never progressing, simply locked in torment against garish demons of all shapes and sizes, with tiny defenses to hold back the tide until you are eventually overcome, only to start the Sisyphean task all over again. Salvation will never come, and even beating the best player in the world would only provide a temporary respite, knowing that another sinner is on their way to dethrone you. It’s like a Bosch painting with a leaderboard.

Inspired by 90s FPS titles like Quake (1996), player movement is fast and precise, and the cacophony of death requires twitchy precision to survive even for a few seconds. A far cry from the arsenals of the games it’s inspired by, you’re stuck with a few variations on the same weapon: a rapid-fire flurry of knives, a quick shotgun-like blast, and, after slaying enough demons, homing daggers. There are no secrets, no extra lives, and no protection. The stark refinement of extraneous choices levels the playing field as players compete to save their souls in unending combat against never-ending hellspawn.

With such a small playfield, nonstop movement is the key to survival, an idea core to the DNA of first-person shooters of yesteryear. Maneuverability as defense was the only way to survive the onslaught of DOOM’s horde of imps and zombies. Far from the spatial awareness and absurd player speed required in the late 90s, modern shooters lean on providing regenerating health and cover-based tactics to create an almost entirely different experience. What we gain in “realism,” we lose in experiences we could only ever have in a digital realm. As the roving flocks of chattering skulls home in on your location, an ever-encroaching wave of enemies requires nonstop spatial awareness. Breaking up the action from the horizontal plane, a Quake-esque double jump brings movement into the vertical, if you’re skilled enough to time it correctly.

The most consistent depiction of hell in videogames ever created

Devil Daggers’ score-attack nature is brought to the forefront with a global leaderboard that serves not just as an ego boost, but a teaching tool as well. You can watch playthroughs of every player’s top score. If nothing else, it’s proof that the best players use the same tools as you, and have the same odds stacked against them. And so you learn that if you want to survive longer, it’s your job to figure out how—there’s no shortcut here. Devil Daggers has little interest in teaching you how to live; any failures are yours and yours alone.

One of the creators of Devil Daggers, Matt Bush, operating under the studio name Sorath—a demon representing “the negation of humanity” and the beast numbered 666, as if this whole “satanic” thing hasn’t been made obvious yet—previously worked on Dustforce (2012), another title focused on a continued flow of momentum. The polish in Devil Daggers is evident. A far cry from modern shooters’ reality-based trudging, it calls to mind the exciting, turbocharged movement of titles like Hexen (1995) and Doom (1993) provided. Gears of War’s (2006) Marcus Fenix may have brought down the Locust, but no amount of heavy-footed roadie-running is going to help you here.

Yes, it’s a truly frenetic bullet hell, and yet that’s what makes it a shame there’s not more to see. The level design of Doom becomes fascinating in how it requires a player to navigate space with split-second decisions. Relegating that push and pull to a single room creates an exciting, evened playing field, yet there’s the potential here for so much more. While the purity of a singular focus is admirable, here’s to hoping we can visit an expansion of this version of hell in subsequent updates.

As gaming’s nostalgia shifts from 16-bit revival to a soft spot for PS1-era early 3D, Devil Daggers and similarly-minded titles like the upcoming STRAFE demonstrate that the current late-90s retro revival isn’t simply devoted to looks alone, but the mechanics those games lived and died by. Sorath’s self-developed engine truly shines in its dedication to maintaining a frenetic pace with unrelenting challenge.

If you’re going to be damned for all eternity to fight for your afterlife, at least it’s with such a lovingly crafted homage to the shooters of yesteryear—and you don’t even need to worry about whether you’ve got the latest Soundblaster card this time around.