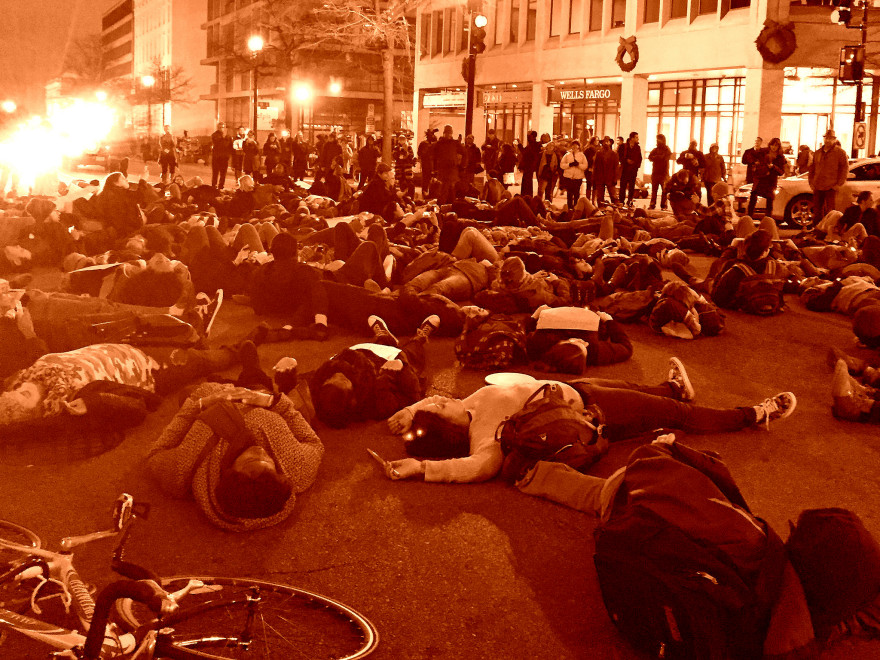 At around 11pm, I exited a friend’s party in Chinatown and made a meandering route towards the F train to skip back to Brooklyn. Then traffic pulled to a crawl as I walked north and suddenly, there were dozens of people holding signs and chanting and singing: “I can’t breathe, I can’t breathe.” And I watched longer still as they passed into the night. I should have joined them.

That chorus was the infamous last statement of Eric Garner, a Staten Island father of six, who was strangled to death this summer by a white police officer named Daniel Pantaleo. On Monday, a grand jury failed to indict Pantaleo, just days after another grand jury failed to indict Darren Brown, who shot and killed an unarmed teen named Michael Brown.

Earlier in the day, I watched Jon Stewart struggle with the gravity of the rulings on The Daily Show, and, much like Stewart, I have been left with a loss of words on how I live in a country that could fail us so badly. I, like many, also wrestle with an overwhelming sense of helplessness about what to do when an unarmed father is strangled in plain view on camera and the man who performs such an act can walk away consequence-free.

And much like Stewart, who hosts a comedy program each week night, I struggle with how my day-to-day existence as a person in the media intersects with the news of the day. Unlike The Atlantic or The New York Times, Kill Screen’s directly stated interests do not often intersect with political events (although at times they do.) Clayton and I have also been careful to ensure that we never mistake the wonderful mission of Kill Screen with the larger and, frankly more important, work of those fighting for social justice.

So it was with excitement that the Devs With Ferguson bundle popped on our radar. With a host of games that we’ve covered in the past (Emergents pick Kyle Reimergartin’s FJORDS, Ice Water’s Eidolon, Anna Anthropy’s A Very Very VERY Scary House) for sale, this collection will give all of their proceeds to the Ferguson Public Library.

Last month, NY Times’ critic A.O. Scott asked a big question of whether today’s art, widely construed, was up to the challenge of our challenging economic and social times:

But if art, ideally, floats free of the grim reality of work, need and sustenance, that reality is nonetheless its raw material and its context. Intentionally or not, artists in every form and style draw on and refashion the facts of life that surround them, and the resulting work takes its place among those facts. What I’m grandly and abstractly calling “works of art” are more concretely and prosaically books, songs, movies, plays, television series, environmental installations, paintings, operas and anything else that falls into the bin of consumer goods marked “Culture.”

While the games themselves may not speak to the specificities of America’s tortured race relations, they are a demonstration that those making games are listening. It’s a powerful gesture from the world of games and a much-needed bridge between a medium we hold dear and a world wracked with disappointment, pain and injustice.

The collection is $9 and closes on Saturday, 12/6 at midnight. Header photo courtesy of Ankorina.