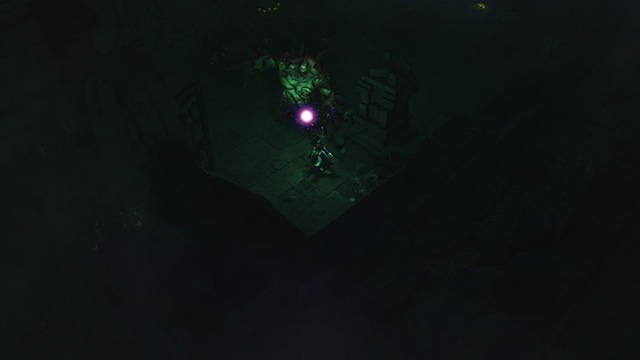 “There is a nocturnal space, but it is no longer empty space, the transparency which both separates us from things and gives us access to them, by which they are given. Darkness fills it like a content; it is full, but full of the nothingness of everything. Can one speak of its continuity? It is surely uninterrupted. But the points of nocturnal space do not refer to each other as in illuminated space; there is no perspective, they are not situated. There is a swarming of points.”

When I start to get exhausted, when bolts of pain shoot through my knuckles and up my arm, I have to remind myself that this is a game about hell.

It’s 4:30 in the afternoon, and I’ve just arrived home. I decide to sneak in another Diablo III quest before I go to dinner. The world before me spans out in the infinite flat gray of fog—that swarming darkness that tells me there are still miles to go, still hundreds of monsters to kill, still thousands of tchotkes hoard obsessively and barter away. I keep clicking. And clicking. And clicking.

I start to get hungry at 5:30. Just make it to the next checkpoint, I tell myself, not wanting to lose the last hour given my deadline. My stomach starts to whine. I keep clicking and clench my teeth.

By the time I made it to the tiny blue circle in the sand I was so eager to see, the sky had turned deep purple outside my window.

Needless to say, I missed dinner.

Diablo was always a game about stepping into the dark. Its purest moments for me were never the impulsive avarice of loot drops, or even the frantic battles. They were the quiet, ominous moments in-between when your character stands illuminated as a sole beacon of light in the middle of the screen, terribly alone. The darkness around hums with mystery—something horrible is bound to appear at any moment. When I spoke to the game’s lead designer Jay Wilson about the previous entries in Diablo, he told me that this spontaneity was actually a trick of 2D animation that couldn’t be fully replicated in 3D—monsters could suddenly appear around you with no warning. All of this was complemented with a cavernous sound design to tell you, no matter where you were, that this world was as vast as it was dark.

The clicking of the mouse is suddenly as unnecessarily utilitarian as a spreadsheet, hollow and pedantic in its repetitive motion.

With Diablo III, something about the pace or tone of the game has changed. I imagine that part of the design challenge for the game—which was allegedly still being ruthlessly gutted and tweaked well into the eleventh hour of its long development cycle—was to keep it fresh and engaging while still using a mouse and keyboard. In the age of consoles, action RPGs have melded seamlessly with the viscera of beat-‘em-ups to remove any illusion of distance between the player and the screen. Batman: Arkham City is a much more detached game when played without the rumble of a d-pad to accentuate every bone-shattering punch you throw.

Gamers have learned to wrestle with their controllers, to bend and prostrate their whole bodies before the screen, to smear their fingers inelegantly across the entire surface of the iPad or smartphone. “Can you explain to me what you like about this game?” my boss asked me yesterday, “because I feel like all I’m doing is clicking over and over again.” The clicking of the mouse is suddenly as unnecessarily utilitarian as a spreadsheet, hollow and pedantic in its repetitive motion.

Diablo III has to make every corpse pop from the isometric perspective—a camera almost solely used today for the disengaged, analytical viewpoint of real-time strategy. Everything about the game therefore screams out at you to go faster, become stronger, get richer. Achievements bing and buzz at the bottom of the screen in an endless array of exclamation points. Creatures roar and charge at you with reckless abandon. The tiny bodies of zombies, crumbling walls and loose furniture, all erupt in beautiful nonsense around you.

More than just the world itself, this change is felt in the combat. Probably the smartest move Wilson made was doing away with the pack-rat impulse to horde health potions. Instead, he borrowed from the very first game he worked on, which had enemies drop red hearts that the player could consume to heal themselves. Now you can’t simply stand still and hack at an enemy, pressing a button intermittently when your health wanders too far into the red. Enemies swarm at you from all sides. Now, you must dive headfirst into the swarm, hoping that somewhere along the line you will be saved. Combat became an insane risk as I jumped from near-death to the absolute pinnacles of aggrandized power within seconds of each other.

That same frenetic impulse works on every level of the character design. The barbarian and demon hunter only gain access to their full repertoire of powers as they attack and are injured themselves. The simple beauty of Diablo III shines through with each of these characters, less as fully-formed works of literature than nascent emotions realized through the gameplay. The barbarian is the hulk—he roars and smashes his way though each level, shaking the earth with his might. I only finished the game as one character, the witch doctor, who’s an entirely different beast.

The most daring choice Blizzard could have made with this game was eliminating the concept of a “default” attack, which they did with this strange, shamanistic creation. Instead of using weapons, he ornaments himself with voodoo dolls and sacrificial daggers. Abandoning the fine-tuned precision of “click the mouse to stab at things,” the witch doctor instead hurls jars of live spiders, calls forth Old Testament-level plagues of toads and locusts, and tosses flaming skulls with the feigned deftness of skipping a stone across the permeable surface of water. You don’t meet an attack as much as you do your best to evade it, spilling undulating gobs of acid across the field and resurrecting grumbling zombies. If the barbarian is steroidal might incarnate, the witch doctor is a force of entropy. By the game’s final levels, combat was a dizzying swarm itself—the screen would overflow with clouds of green, wisps of blue, dark explosions of red. Fifteen seconds later, everything would gone. But still I stood there, shaking quietly in the midst of its absence, waiting for the swarm to return.

“How do you wade into the fray?” a knight in shining armor asks you early in the game. The barbarian grunts a monosyllable about honor. The witch doctor muses about the impetus of the spirits. Each answer is different, but somehow the same. Reflecting on last year, Jason Johnson wrote that playing modern videogames was like living in the stream, as developers fully embraced their shift over to the information superhighway. But a stream implies the coherence of direction, while playing Diablo III is wading through chaos. It’s a game about living amidst the “swarming of points.”

You see this on every level of the intricately layered battlefield, winding downwards to the depths of hell and propelling ever upwards towards the heavens. On every side, the world drops off in a precipitous cliff. Below and above, you see other demons and angels duking it out. Even when playing alone, the progress of your Battle.net compatriots scroll down in an endless newsfeed at the side of the interface. Soon the game will embrace a more robust and self-contained model of capitalism—surely its own version of chaos to some—than ever detailed before in a virtual world.

The story, for its part, is told with the artful hamminess of a comic book. Demons scream at you every few moments, “You think you can defeat me?!?!” then depart, cackling evilly. It becomes overwhelmingly interesting for one moment in the second act when a character asks why humanity has allowed the forces of heaven and hell to colonize earth through their conflict. But any pseudo-nationalist impulses or nuanced political choices are quickly pushed to the wayside: this may be your battle, but it’s not your war.

Playing the game in multiplayer propels this ruthless inertia along at an even more breakneck pace. There’s no time to sit and ponder the scenery when your squad is pushing ahead in the hunt for more gear and more gruesome kills. Even stranger than the controversial always-online requirement and various restrictive forms of DRM is the seamless continuity the world links between each of your characters. Start the game again as a new character, and you’ll find all of your gold and treasure left behind from the last game. So much for any sense of narrative diegesis in this story-world; somehow the time-space continuum has been transcended to allow each phantom character to swap gear and stories with one another.

You can either fight the good fight, or leave the stream entirely. Here we see the ultimate irony of videogames in a bitterly honest form—everything tells us we’re suppose to matter, to be the central agent of action. Or at least we want to believe we are. Really, we’re just along for the ride. Diablo III doesn’t exactly tell you that you don’t matter. But what it does say is even more strange, and perhaps more unsettling: no matter where you are, you are not alone.

I finally finished Diablo III late Saturday afternoon. The night before, I had breathed a temporary sigh of relief as I came to end of the act III as I saw the obese and garish demon from the promotional trailers scream in anguish. I texted a friend waiting again to hear when I was done so I could go meet him. Then a moment later, another demon crawled back into the picture. Yet again, he smirked at the thought I could defeat him, intoning darkly that soon the armies of hell would unleash chaos. Seriously, what drives these guys? Does anybody really love chaos and evil that much? I left the game for the night.

Seriously, what drives these guys? Does anybody really love chaos and evil that much?

“Find Diablo,” the game told me the next day. Moments later: “Kill Diablo.” When he finally fell, a peculiar third command surfaced: “Defeat Diablo.” Didn’t I just do that? I kept clicking on his felled corpse. The music swelled. My witch doctor wailed. I clicked. The screen faded away for a moment. I kept clicking, not realizing I was finally supposed to stop.

It’s beautiful outside, I told myself. I should go lay in the grass or something. Back at the title screen, the music teased ominously and a raven cawed. I haven’t tried playing the monk yet, I tell myself. Maybe I should do that. The demons called out to me, luring me back into the swarm.

“We have not seen the end of the evils,” my witch doctor said moments before when everyone around him rejoiced atop the corpse of all evil.