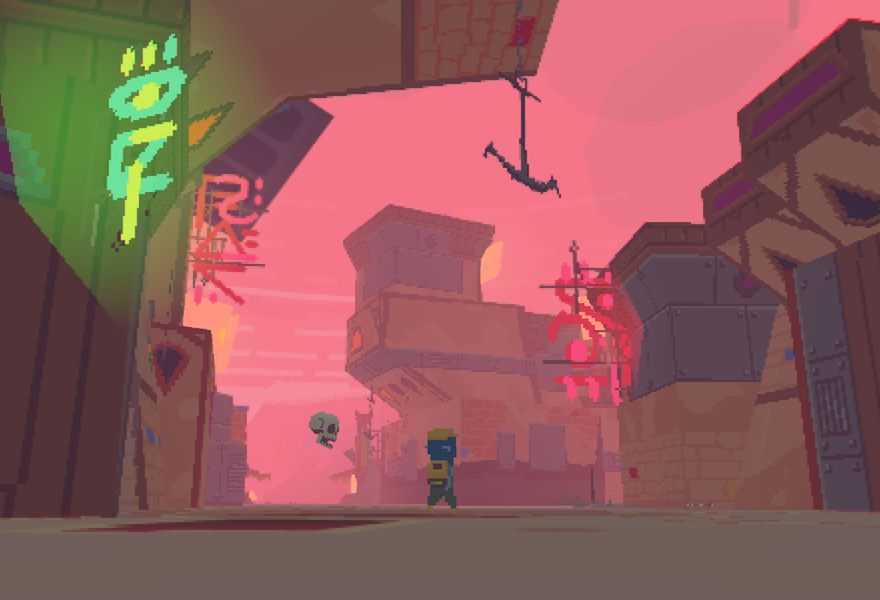 It’s been too long since we last checked in on Diaries of a Spaceport Janitor, the game about exploring a grand sci-fi universe through the viewpoint of a lowly municipal worker rather than a more standard space marine hero figure. Since my original post covering the game, the team has been hard at work bringing the backwater trash-planet it takes place on to life, and recently, that work has paid off as a series of new GIFs and screenshots posted to the game’s official Tumblr. Since they give me an excuse to write about this adorable blue collar spin on space adventure again, let’s take a look at them, shall we?

The first thing that comes to mind with these new gifs is the sense of depth. Not narrative depth, although that certainly seems to be present as well, but visual depth. While the previous screenshots from the game did include some light CGI elements, you would be forgiven for looking at its pixelated spritework and assuming the game was in 2D. Here, however, the game’s true low-poly nature shines through. Look, dear readers, at our heroine picking up trash, and marvel at all three of its glorious, albeit stinky, dimensions.

We also get a glimpse of the type of ships coming in and out of the game’s titular spaceport. In one particular GIF, there appears to be two of them, as well as a shadow of what could be a third. Notably, they all look like sea creatures, with the two visible ships resembling manta rays and the shadow resembling a shark. Another GIF shows the spaceport on a busy day, along with a surprisingly speedy ship resembling a whale.

Shortly after, we see a few GIFs of our heroine at market, ogling goods she could never afford. Like the description says, “You may never make enough money to buy these items, but window shopping can still be a lot of fun.” It’s a nice subversion of a typical videogame shop system, and helps drive home our character’s place at the bottom of her interplanetary society. She may live among these shops, she may even pass some of them during her normal daily commute, but they are distinctly not for her.

Another set of images highlights a weekly festival celebrated by the local populace. Held on “Theday,” it involves lighting prayer candles, listening to live music, and of course, throwing lots of garbage on the ground. Guess who’s gonna have to clean it up? However, not all discarded items are garbage. Some items are special, if only just, as the site’s description states, “because of how they make you feel.” When all you can do is window shop, I suppose you take what you can get, even if it’s just a crumpled up star chart of places you’d much rather be.

Finally, the most recently posted set of GIFs show off the “Sewerdungeon,” an area that is said to hold “many terrible secrets.” Additionally, they also give a glimpse of the mysterious floating skull that, as the result of a curse, follows you around throughout the game as a whole. Both make you “feel very strange,” and my guess? You weren’t even supposed to come in today.

All of this paints a promising picture of a game about working a job you hate, because, even though you’d rather be anywhere else, you just need the cash. Worse for the protagonist is that, because she lives in a Spaceport, escape is always taunting her. She’s not kept at the bottom of her society by distance or lack of ability, but by economic inequality, which is a much harder hole to crawl out from. So hard, in fact, that enduring taunts from a floating skull and digging through garbage in the sewers starts to look like a preferable alternative- no matter how strange it makes her feel.