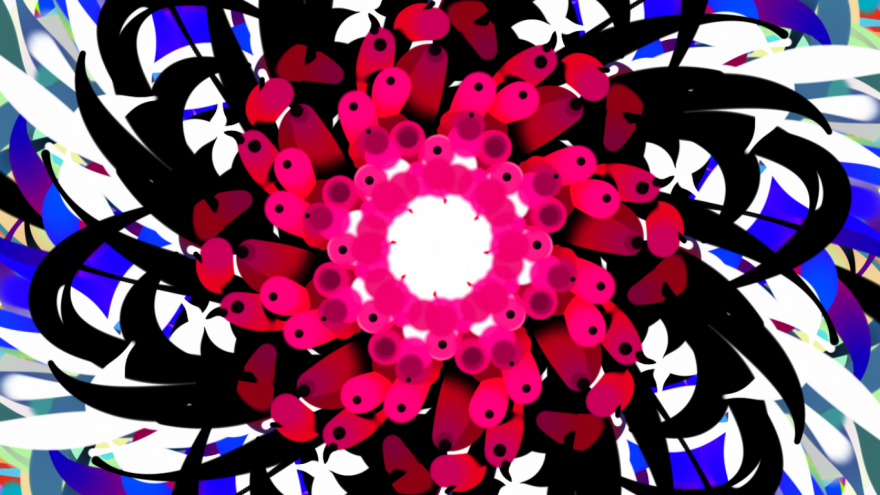 While playing A Diary of Whispered Truths I am weaving a spiritual lesson like a cobweb out of pulsing synth fabrics and swirling dot tribes. Everything is a big gesture: the red-pink circles like suns bleeding toward an edge, the patterns of milky spills that rumble my speakers with an intense celestial sound. To look at it is to see thousands of infant hands smearing paint and angel dust into kaleidoscopic animations, to hear it is to find inner peace.

Even without an audience to hold captive by the enlightening promises of my audiovisual composition, there’s a sense of universal arrest, as if I speak in a god’s voice to all living creatures of the meaning behind all their lives. I want to play A Diary of Whispered Truths to a dozy crowd at a stone-rock festival, and I also want to be in that crowd, drooping from my shoulders and swaying to a beat no one else can hear.

you put on a show of an ethereal magnitude.

A Diary of Whispered Truths is a digital art toy, but it’s also a music creation tool, and a music visualizer, all-in-one. It’s Niall Moody’s personal riff on Andi McClure and Michael Brough’s creative tool Become A Great Artist In 10 Seconds. As with all tools like it, it has its own idiosyncrasies that can be learned or just as equally dismissed.

You can investigate the effect that moving your baton-like mouse has, and press each letter on your keyboard one at a time, treating it like an instrument. Press ‘F’ and you get a clap that you could use as a background beat. Press ‘W’ and the whole screen rotates on its axis. Press ‘U’ and ‘T’ and you have your own Rorschach print rendered in neon. Or you can entrust chaos, throwing your fingers at the keyboard as if a novice clumsily imitating the impossible fingerwork of a master pianist. Either way, you put on a show of an ethereal magnitude.

I love how it starts with a void where, out of nothing, I am able to conjure color, shape, movement, and tone. It’s as if a missing scene from Disney’s Fantasia that illustrates the Big Bang has been found, but instead of classical music are the euphoric, tranquil lines of EDM’s most angelic choruses. “God Is A DJ” informs Faithless’s 1998 dance hit, and it’s this that A Diary of Whispered Truths has you believe, only, that you are that DJ.

There is another way to play A Diary of Whispered Truths. You can feed it text that it then reads as if commands, generating unique audiovisual pieces for you to stare into. And when referring to text here, I’m not speaking of the word “hello” that you typed into a Notepad file; you can have literature and poems visualized into what I imagine would be their most abstract form yet.

You can purchase A Diary of Whispered Truths for £3 on itch.io.