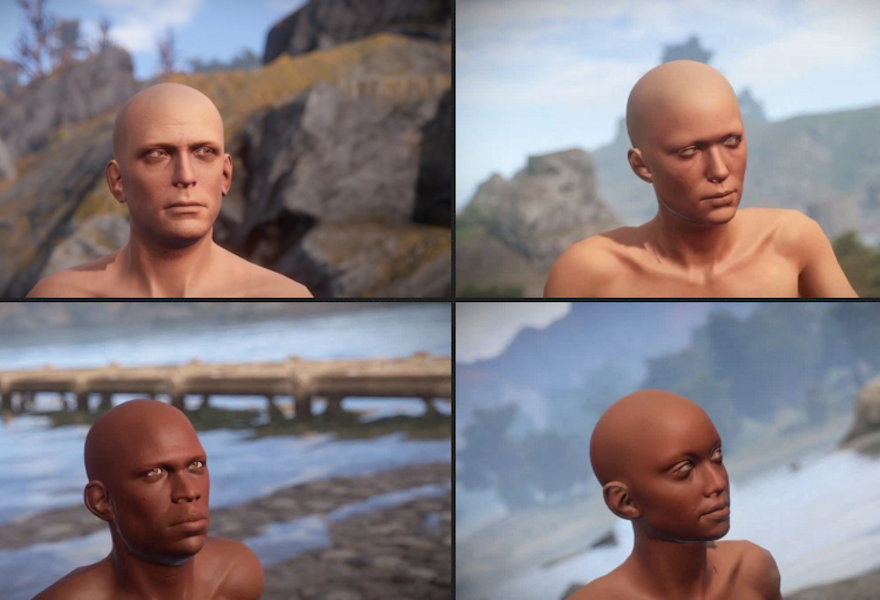 Unlike many other online multiplayer games, Rust doesn’t give players any control over what their character looks like. Instead, it randomly generates a set of features and ties them permanently to the player’s Steam account. This means that, even if they leave the game, their character will look the same when they return. It’s a fitting choice, given how primal the world of the survival-based Rust is. Just as in real life, Rust doesn’t let you choose what you want to look like, but instead spits you out naked into its world with a body you had no say in, and tells you to deal with it.

Unfortunately, when the game originally released, characters were limited to white men. In an update released in March of 2015, though, the game sought to widen its diversity by adding unique skin tones and facial features to its character randomizer. Now a more recent update has added women to the game as well, meaning that some male players may have to come to grips with playing as a gender that does not match their own, something women had already been dealing with since launch.

The response to the new update has been divisive, similar to the backlash the game experienced when it introduced multiple races last year. Back then, certain white players took to Steam reviews and social media to show dissatisfaction with suddenly having to play as black or Asian characters without choice. However, players of color at the time noted that not just Rust, but hundreds of games had been forcing them to play as white characters for years. “There’s an interesting bit of comeuppance there in getting players who are white to sort of experience what it’s like for everyone else who doesn’t get to choose,” said Kill Screen founder Jamin Warren in an episode of PBS Game/Show. “I think it’s an awesome experiment and I hope they continue with it.”


Continue with it, they have. Now that the game has added women as well, the developers have taken to their devlog to explain their reasoning behind the update. “We understand that you may now be a gender that you don’t identify with in real-life,” writes Rust developer Craig Pearson. “We understand this causes you distress and makes you not want to play the game anymore.” However, he then counters this by noting that this was the situation female players were already contending with. “Technically nothing has changed, since half the population was already living with those feelings. The only difference is that whether you feel like this is now decided by your SteamID instead of your real life gender.”

“No wiggle room…You are who you are.”

When Eurogamer asked Rust‘s lead developer Garry Newman if there would be any wiggle room for periodically changing a character after assignment, he responded by saying “No wiggle room…You are who you are.” Again, this is in line with Rust’s existing “life is unfair, deal with it” aesthetic. It also helps draw attention to how often women must settle for playing male characters, even in games that pride themselves on openness, such as The Witcher 3 (2015)—in which you’re a man for the majority of the game—and The Legend of Zelda series. If male players become upset that they now must play as women, that seemingly only strengthens the argument for more female protagonists in games as a whole.

For me, as a transgender woman, however, the addition of gender to the game—and how it is assigned—represents something else entirely. Like Rust players who are uncomfortable playing as a character who does not match their real-life gender identity, I spent the first 20 years of my life feeling extreme discomfort over the gender I was assigned at birth. Despite my urging that I was not a man, I was forced to live outwardly as such, complete with all the social expectations that come with doing so, until I was finally able to go to college and begin hormone therapy without needing permission. There was no bargaining with my family, and my teen years felt like they would never end as I woke up every morning increasingly disgusted with myself and helpless to slow my puberty.

Ironically enough, one of the only comforts I had at the time was within games that let me play as a woman. It wasn’t much, but by playing female characters in online multiplayer games like Star Wars: Galaxies (2003) and World of Warcraft (2005), I was able to explore my burgeoning trans identity in a safe environment. In other words, when my life inside the real world was hell, I turned to virtual worlds to offer me some small amount of comfort. Conversely, Rust is now asking those that find the real world comfortable to experience a virtual world that is not. In forcing some players into a gender that may not match their actual gender identity, Rust may be the first MMO to allow its cisgender players to understand some small portion of what it might be like to be transgender.