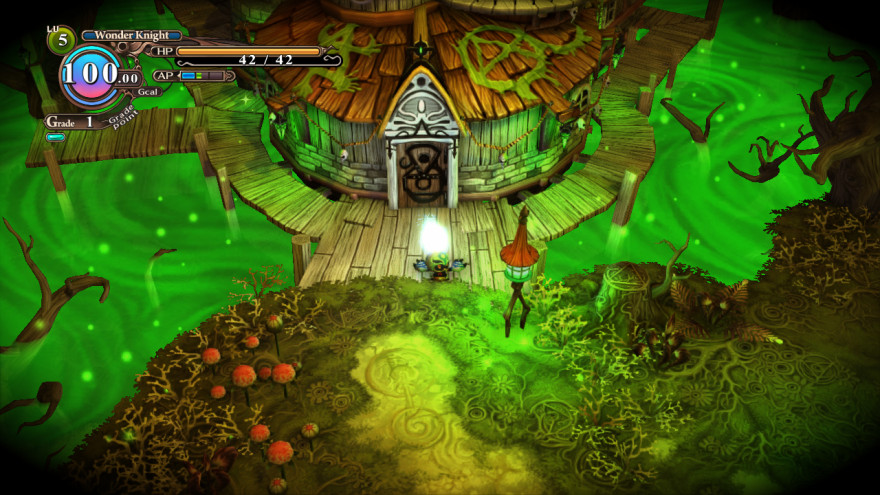 Title:
The Witch and the Hundred Knight

I think Witch and the Hundred Knight wants me to laugh—the amazing music suggests the tone is supposed to be humorous, anyways—but I don’t really understand the joke. The Hundred Knight, the character you play as, has no sense of humor because it has no brain, but the game has to know that I have a brain, right? That I can decipher funny? Developer Nippon Ichi’s Disgaea series—its most famous, and one I really enjoy—is mostly built upon the idea that players have brains and can multitask and enjoy humorous stories that are lengthy subversions of more traditional heroic stories and indulge in difficult combat and spend hours in menu trees trying to upgrade characters for an iota of statistical difference. There is evidence they understand humor.

In Disgaea, however, they’re joking with you and at you and therefore you are the subject and agent of the joke because, for example, you’re helping devils and demons save the world and kill angels and you’re taking your rage out on toy penguins. That’s ludicrous, but the Disgaea games still largely make sense because they take place in a Revelation-ish universe that you already basically know the standard view of, so you immediately get the joke that the bad guys are the good guys but still assholes. They are coherent because the stories essentially color outside the lines of a Biblical coloring book; it doesn’t matter that you don’t know the whole story because you kind of already do.

Witch and the Hundred Knight doesn’t have that known shape to rely on, so early on when a random and unexpected rape scene ends with you, the player character, eating (and loving) the deep-fried remains of a witch who was on the receiving end of this sexual assault, you are, let’s say, drawn out of the story. Part of this is that random sexual assault played for humor is a non-starter, of course, but I actually think the scene lays bare a critical problem with the game as a whole. Metallia, the rapist, is the witch of the title, but she hasn’t filled you in on why she hates this other witch so much. Consequently, there’s no context for Metallia being so brutal except for a broad notion that she is an “evil” witch; there’s no substance to the obviously “good” witch’s declaration that she is, in fact, Metallia’s mother; there’s no attempt to clarify the relationship beyond Metallia’s repeated dismissal of the other woman as a whore; and there’s no way to contextualize what just happened. At this point in the story we know that Metallia knows more than she’s saying to us but also that the story is probably more complicated than Metallia thinks it is.

In other words, we know nothing much at all, and certainly nothing that allows this scene to work as a character beat. Especially since the next thing that happens is that the game cuts to a fake credit sequence. (To be fair, this happens at the end of every chapter, but because this is the first time it happens it comes off as a cheap joke.) And then, when the fake-out ends, Metallia’s robot butler presents the deep-fried carcass and you cheer with delight and eat it. At this point I feel compelled to mention that there are times when a somewhat meaningless menu pops up during conversations where you can affirm, deny, question, or ignore the requests and offers of other characters. This is not one of those times. Your character just squeals excitedly.

I harp on this point not because this one scene invalidates the game, but because it is exemplary of a primary flaw with all aspects of this game. Previous Nippon Ichi games have all walked a very tight line: they just avoided having too many story twists, too many game mechanics, and too many things happening all over the place. Witch and the Hundred Knight careens back and forth across the same line, resulting in a game that is simultaneously far too stuffed full of ideas and far too impoverished in substance. Throughout the story and up and down the chain of gameplay—the arbitrary response dialogues; the time limits on level excursions; the random weapon spawns where you’ll get six Rat Staffs that all have different stats; the ability to equip five weapons and then button-mash the square button to use all of them; the stomach mechanic that requires you to do stuff that I still don’t really understand but anyways you’re storing stuff in your stomach; the special abilities and “facets” or other forms that you can adopt; the fact that you gain experience and levels but can also distribute ability points to gain stats; the mechanic where you “raid” houses which essentially means you find, like, a potion for the measly price of a 20-second cut scene, but so you do that for a few minutes in every village just to get five potions and the one good thing; the ability to dash; the multiple ways you can restore your health bar—Witch and the Hundred Knight is just a bunch of stuff. Rarely is there context for that stuff, and never does it gel together to seem like a coherent whole.

In other words, we know nothing much at all

The pile of stuff in each Disgaea game is portioned out in a way that makes it seem more manageable and coherent. Plus, that mess of activities seems more relevant because the combat is so complex and different, fight-to-fight. All of that complexity and micromanagement remains in Witch and the Hundred Knight, but the game basically amounts to running around poorly designed levels that are essentially HD palette swaps (we’ll call them climate-swaps) and mashing the square button to kill things.

There’s no strategy to speak of; there is simply levelled-enough or not for the square button to functionally kill things on whatever stage you’ve found yourself, followed by cut scenes where characters do things that don’t make sense until more story is revealed later on. It won’t surprise you, I’m sure, that it turns out that Metallia is the victim of a much larger plot. A much larger plot that … doesn’t make much sense, and certainly doesn’t retroactively make her random outbursts and cruelty make sense. Those scenes are just more ideas that were thrown onto the world’s biggest whiteboard: 87,934 game ideas, and each and every one of them made the cut. Even ones as clever as this: “An Ice Witch? She should be the witch who wears the least amount of clothes! Get it?”

If this is fun, I can’t decipher it. I kept finding myself entering a new area only to be woefully unable to deal with new monsters. At that point, your only option, really, is to repeat stages you’ve already completed to grind to a point where you don’t die trying to fight off a couple of the new enemies, and then grind some more until you can move around comfortably in the new area. Which isn’t fun, because every time you die your time limit goes down when you heal yourself, meaning eventually you have to warp back to home base just to refill it before you can warp back to continue getting your ass kicked by monsters that don’t look appreciably more difficult or dangerous than the ones that you can mow through in the next most recent level. You can’t just grind to solve the problem; you have to micromanage grinding to solve the problem.

That generally seems okay in a Disgaea game, but there you’re normally making a choice between pursuing the narrative or putting in the work to open up side battles. Here, there is no choice. At no point while playing did I feel like I was learning the system; at many points it felt like just another joke. Like: “Surprise! This level is too hard for you! Grind now!” But for what? To see Visco the Dog Princess finally admit that she likes Metallia bullying her all the time? To find out what fetish the [Insert Element Here] witch satisfies? To find out if the robot butler is really all that he claims to be? I already knew all of that was going to happen, ‘cause I’ve played Nippon Ichi games before. It’s strange, because they’re usually masterful at not making hell seem boring.