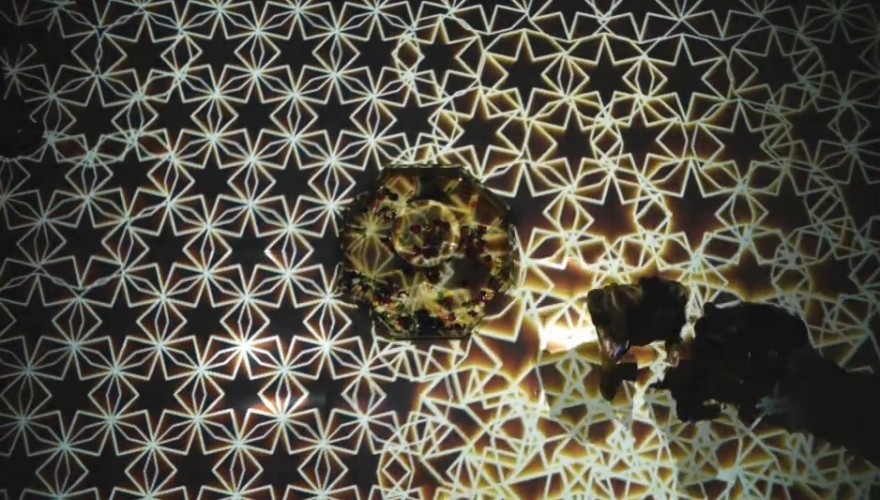 Pioneering digital artist Miguel Chevalier discovered within Islamic art a language similar to his own. His interest in the generative image, ornate designs, virtual cities, and especially algorithmic art has commonalities with the symmetrical geometry seen in Persian rugs, and mosques such as Jama Masjid of Herat in Afghanistan.

What both Chevalier’s work with computers and Islamic art’s complex star-and-polygon patterns share is a basis in mathematics. In 2007, Paul J. Steinhardt and Peter J. Lu released research notes into medieval Islamic art, which showed a breakthrough around 1200 had led to an intuitive understanding of complicated mathematics. Writing about this in an essay for Muslim Heritage, Professor Salim Al-Hassani says that this discovery means Islamic architectural design since the 15th century was “created using a set of just five template tiles, which could generate patterns with a kind of symmetry that eluded formal mathematical description for another 500 years.”

a play between art separated by hundreds of years

Chevalier’s installations and art projects play with similar, unending patterns within a digital context. So it seemed appropriate that he was given the opportunity to honor Islamic art last year with “Digital Arabesques 2014.” It was an interactive landscape projected onto a United Arab Emirates waterfront that enriched the repeating floral and astronomical motifs in arabesque tiling through its digital technology.

More recently, between April 3rd and April 15th, the Medina Quarter of Tétouan in North Morocco played host to Chevalier’s “Digital Arabesques 2015.” The idea was principally the same, but the new indoors location led to a more intimate experience, while an overlook granted viewers an advantageous overhead angle from where they could watch the installation.

Thankfully, film maker Claude Mossessian was able to capture the wonder on show during Chevalier’s installation with the video you can watch above. As the video’s description reads, the use of multicolored digital mosaics allowed for moving patterns that “create a wave that forms and deforms to infinity to reveal a colorful living universe that is constantly renewed.” Visitors need only to move across the art, circling the small octagonal water feature in the center to see this effect play out under their feet, made possible by infrared sensors.

What’s particularly satisfying about “Digital Arabesques 2015” is how it ties together Chevalier’s work with ancient Islamic art in an enclosed space. With his virtual carpet, Chevalier enhances the interlacing patterns of the architectural design of the Moroccan building. It’s a play between art separated by hundreds of years, united by the same mathematical principles and entwining geometry.