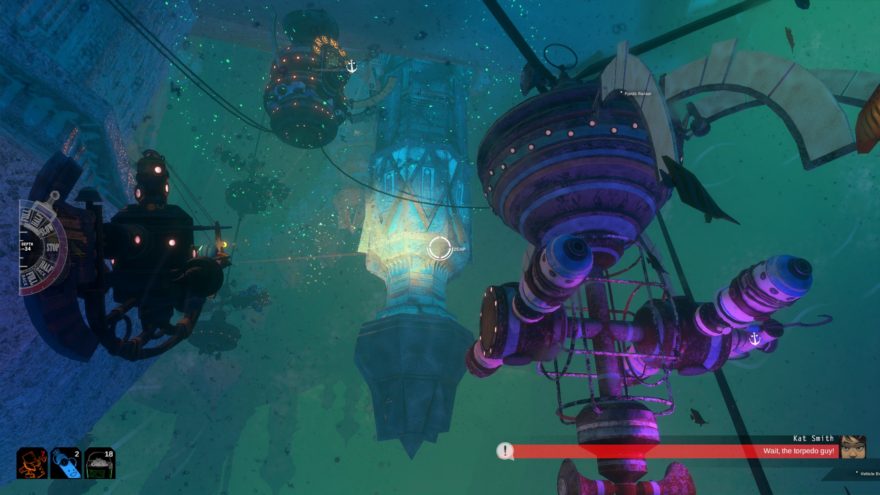 Outer space is what currently holds the global population’s active imagination. The big breakthroughs in science that wow us are made up there, and so our popular stories follow suit—whether it’s space disasters directed by Hollywood (Gravity, Interstellar, The Martian) or videogames that promise us the universe (No Man’s Sky, Stellaris, Elite: Dangerous). Popular culture’s current output sells the idea that we are infatuated with life and death beyond our home planet.

But Leo Dassey, creative director at Arachnid Games, hasn’t turned his head to the skies; he’s looking the other way. His team’s upcoming game Diluvion is an undersea adventure inspired most of all by Jules Verne’s classic novel Twenty Thousand Leagues Under the Sea (1870). His enthusiasm leaks through straight away as I ask him what it is about Verne’s novel that gripped him: “The sense of adventure in the ocean; the giant creatures; the fact that the Nautilus has a library; the creativity behind the submarine design in Disney’s film adaption.”

We need to slow this down. In the demo of Diluvion I play the captain of a submarine and with my crew we’re on a mission to explore the ocean. Now, in Diluvion‘s world, being a submarine captain is a big deal as the planet has been entirely flooded and humanity has been trapped underwater due to a thick, impenetrable layer of ice. This cataclysmic event happened centuries prior to when the game starts, and so what has evolved since then is a whole new culture with underwater kingdoms, traffic, legends, religions, and so on. The game is about diving into all of that.


What strikes me first about Diluvion is how it makes me feel like a captain. Although I am technically pressing buttons to directly steer the sub and increase its speed, the game brings up a talking head in the corner when I do, showing my helmsman’s face as he says variants of “Aye aye, captain.” There’s a sense of constant communication between my lackeys and I as we drive around thousands of meters deep in the game’s 3D rendition of a vast ocean.

But it’s not only these talking portraits that sell the effect, as at any time I can press a button to move smoothly from that 3D view and into a painterly 2D cutaway of my submarine. From there I can see which station each crew member is assigned to, performing their designated operations. Similar to FTL: Faster Than Light (2012), I am able to move crew members around from this 2D view, bolstering different functions of the submarine as required.

But as Dassey explained to me, crew management plays a different role in Diluvion than it does in FTL. “In FTL, you’re viewing your crew during combat, and giving them orders real time. In Diluvion, you assign crew to stations based on their stats to get the best bonuses from each station,” Dassey said. “Sometimes in combat you’ll need to dive into your sub interior and make quick changes, and for this we have a mechanic called Captain Time (similar to bullet time) which slows down time so you can make those changes without getting blasted.”

In practice, all this means is that I need to consider the skills of crew members and the number of crew in each station. If I’m concentrating on exploration I may put more crew into the helm to get bonus speed. Simple as that. For the most part, though, what I’m doing when playing Diluvion is sitting in that 3D view, bringing up my compass for navigation, and pinging my sonar to look out for any dangers. At first I’m stuck in the confines of a dark trench, shooting mines and visiting a nearby town to refill my oxygen, it’s a decent introduction but I don’t feel much like Captain Nemo.

“we never bar the player from exploring”

A little later on I emerge from the trench and, oh gee, there’s a whole frickin’ ocean to whiz around for as long as you have the supplies to do so. It’s a lot to take in—terror and wonder—and so I asked Dassey how he helps players with negotiating such a huge open space. “Aside from a brief introductory segment in the beginning, we never bar the player from exploring,” he said. “The aggressive fog is meant to build up that sense of mystery and put focus on the more immediate surroundings. We also use the sonar system to make sure that the player can find something interesting beyond the fog. We make sure that if the player is on a quest, there’s ways to navigate to that quest, using a system of landmarks, compass, map, and fish.”

As I approach the end of the demo, my crew advises me to check out a nearby town after we’ve been attacked by some large, jellyfish-like creature. We dock and find it abandoned except for what seem to be a few petrified citizens stood in the emptiness. It’s eerie. A few seconds later I find out why. A huge, fuck-off fish emerges without warning from the fog and swallows us and the entire town whole. It was shocking. And it certainly felt a lot more like the kind of peril and excitement a game inspired by Verne’s novel should be aiming for.

This extraordinary moment is only the start of what Dassey and his team have planned for Diluvion. I ask him if there will be more of these kinds of surprises, to which he replies, “Yes, absolutely. One of the first you encounter is a massive Japanese Spider Crab with a battleship inspired by the WWII mega-ship Yamato as its shell.” He means this thing …

Captain Nemo once said, “The human mind delights in grand conceptions of supernatural beings.” It feels like Arachnid Games is trying to capture the heart of that quote with Diluvion. And they’re being wise and not showing much more of the game’s more fantastical side in order to honor that. It’s to be a surprise to everyone as they steadily navigate the deepest blues, stopping at towns to restock and perhaps take on another crew member, and eventually upgrading the submarine and buying new ones. I don’t know if you’ll ever get hold of a submarine that’s equivalent to the technically advanced design of the Nautilus, but from the little I played I don’t think you’ll need it to get the thrill of the Captain Nemo experience.

Diluvion is coming out for Windows and Mac in 2017. Arachnid Games would love to get it on console one day too. You can find out more about it on its website.