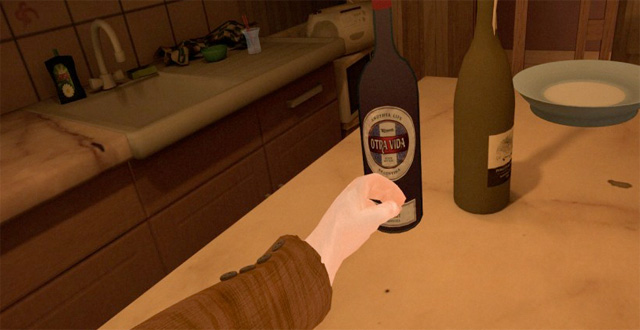 If videogames are two things, they are spatial and temporal: concepts a Kantian would say are human instincts. Likewise, poetry often uses space (imagery) and time (rhythm and meter) to magnify the emotional details of human experience.

Dinner Date poeticizes our small, unconscious tics. A tutorial makes it clear that I am not Julian Luxemburg, but his subconscious. I control his doubts and anxieties in response to being stood up on a date. I do not control the flow of the game. I can’t alter Julian’s script; I just provide an emotional framework.

The game is structured around wasted time. Julian waits for his date for more than an hour, eventually leaving to seek other company. As time progresses, Julian’s tics gain significance. Some remain throughout the game. The finger tap, for one, operates like repetition in poetry. It reflects Julian’s compulsive over-thinking: He constantly reconsiders his sex life and how he believes he is viewed by others, among other things. In a way, repeatedly hitting the button reinforces his obsessive traits.

Other tics are only playable if Julian faces relevant objects. The first two chapters introduce Julian’s anxiety as he checks the clock and eats bread. Julian’s growing anger, while eating soup in the next chapter, serves as a counterpoint to his initial excitement. If Dinner Date were a sonnet, the final chapter would be Julian’s couplet. Smoking a cigarette, he resolves to overcome his disappointment and regret.

These simple acts encourage a sincere understanding of Julian. And the space makes his emotions tangible. The dimly lit, lived-in apartment reminds us of Julian’s sulking psychological state. A Byron poem tacked onto the fridge door, for example, reinforces Julian’s loneliness. When Julian faces the poem during the cigarette segment, he deeply laments his sense of alienation.

Unfortunately, I wasted plenty of time trying to explore each chapter on my second playthrough, only to find that the game offered no additional feedback. Dinner Date is on a singular path, nothing more. Though the game presents a character portrait, its restricted narrative dehumanizes Julian. After more playthroughs, Julian no longer seemed like a conflicted man; he simply seemed like programming. This man is predictable enough without being almost absolutely linear.

On the other hand, the pattern and frequency of Julian’s actions are still generally up to the player. Dinner Date allowed me to dissect Julian by exploring his body language—something he had no control over. I goofed around: having his hand waggle uncontrollably, making a mini-game out of the bread and dipping sauce. While I didn’t necessarily like Julian, I felt a sense of awkwardness and vulnerability through the physicality of his tics.

Dinner Date certainly isn’t the first game without a foreseeable goal or point system. But it stands apart in its approach to the character-player relationship. Dinner Date attempts to focus on human idiosyncrasies. It takes little time to complete—because it is poetically condensed, it’s able to focus on the small.

Despite some problems, Dinner Date ultimately inspires pathos, empathy, and eventually introspection. Julian’s lack of self-awareness had me thinking about my own. What are the things I do unknowingly, and what do they say about me?