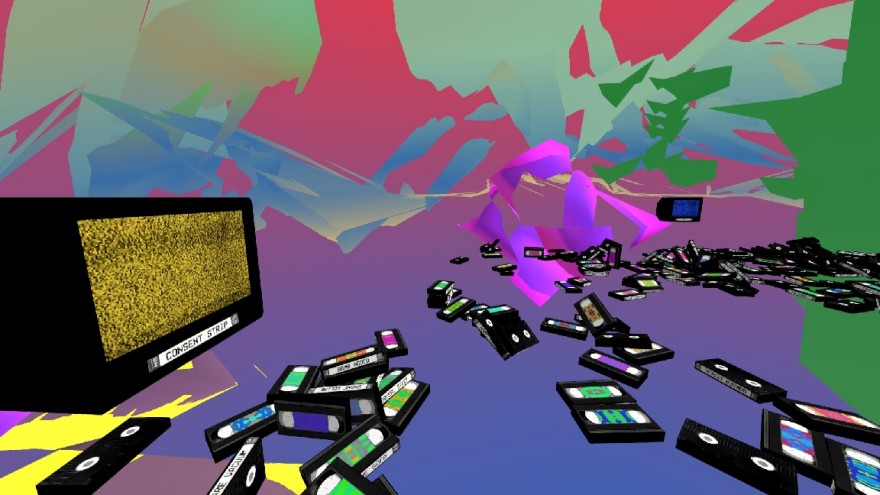 There’s a huge pile of video tapes sat in a circle when you open up Mystery Tapes. Sat there like pirate’s gold stowed away in some forgotten undersea cave. You can run through them, knocking them over with your invisible feet, you can even pick ’em up and throw them. Oh, how I miss the physicality of video tapes.

Do you remember that? How good it was to pick one up and shove your finger in the plastic cogspace and turn it, tightening or loosening the reel with a series of rapid clicks? Remember when you put them in those large black machines and you’d hear a frightening crunch? “Gah!” my dad used to cry, “it’s chewing it up. Quick! Eject! Eject!” It was like feeding parcels of entertainment to an unpredictable monster that we let sit underneath the television.

there becomes something of the glitch artist about you.

Video tapes consumed a large part of my childhood. If I wasn’t watching them I was staring at the covers of the horror movies while my parents were out of the room. Demons and stalkers, large knives covered in blood; my imagination roasted these images into feature-length terrors. It’s this dream directing that Mystery Tapes has us indulge.

All of the tapes are randomized in two ways. Firstly, the name written on their labels that, you’d think, would tell you of its contents. But it’s not home recordings of Bambi or the late-night wrestling matches I made my dad stay up to record for me. It’s two or three unrelated words that, together, seem to describe a single strange concept. Here, I’ll pick some up and write them out for you: “Book Chicken,” “Pat Gasoline,” “Dust Geese,” “Copy The Frog,” “Shoes Lotion.”

The tapes are also randomized by what they contain. Insert one into either of the three TV sets available in the virtual space and … woah. Rather than projecting images and sounds out through the screen and speakers of the television, the tapes are realized as 3D holograms, engulfing the space all around you.

But they don’t depict clear-cut objects, more like suggestions of scenes, as if you’ve fell through the geometry of a videogame world and exist in the hollow space underneath. Some of the arrangements even frazzle occasionally to imply that they’re broken parts of a larger image. On occasion you get a creature trapped inside a white orb that speaks to you in quasi-prophetic messages. There are also faint echoes of easygoing sounds that play on loop that possess the same fragmented quality as the visuals.

I mentioned three TV sets. You can put a tape into each one and watch as each of their blooming contents layer onto one another. Each combination is transitory and so there becomes something of the glitch artist about you. Those that use VHS technology to create glitches today acknowledge that they don’t have full control; that’s part of the appeal. They have to embrace serendipity and search for something that pleases them. They don’t know what it is until they see or hear it. You must do the same here. And with 640 tapes to try out there is plenty of material to explore.

You can download Mystery Tapes for free on itch.io.