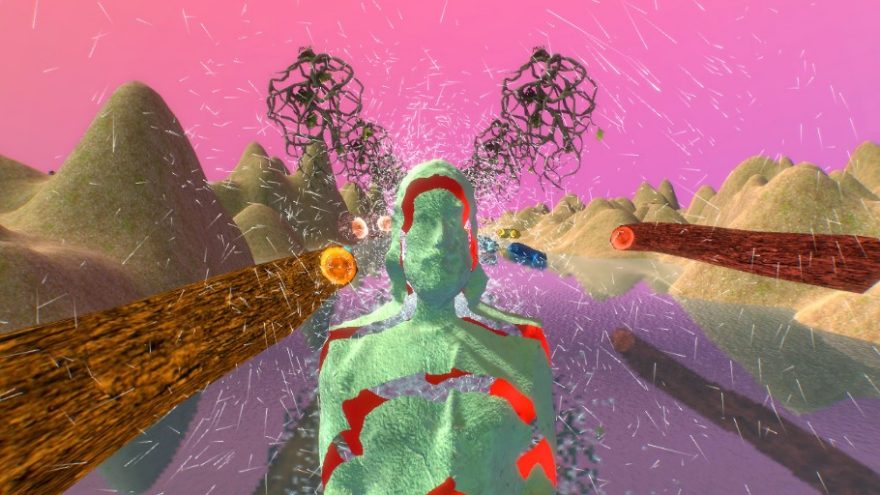 The easiest way to describe Streamer is to say it’s a sublime trip through an infinite lake, where a floating avatar traverses endlessly through a colorful landscape. But, it’s a little deeper than that.

A collaboration between electronic artist and co-founder of Driftless Recordings Joel Ford (or Airbird) and Ryan Sciaino (also known as Ghostdad), Streamer is an interactive music video for the song of the same name that puts players in the director’s seat. Players are invited to send the floating avatar down the endless lake at their own pace, controlling its direction, the placement of the camera, and whether its view is first or third person. As Sciaino told me, it’s all a way to keep the listener more engaged.

meditating “on the song from inside the 3D landscape”

“There’s still a space for cool music videos but it’s definitely a saturated one,” he explained. “Offering something experiential has a higher likelihood of someone chilling out in the browser and actually listening to the song rather than clicking past it and getting distracted on YouTube.”


Former roommates, Ford and Sciaino have both moved into different areas of the music industry, so collaboration takes some work—starting with emails and eventually meeting up in New York to begin bouncing different ideas off of each other. “What’s rad is those guys [Ford and Driftless Recordings’ Patrick McDermott] are always down to experiment when working on something for the label, and I’m glad they’re into trying things that are more than just music videos,” Sciano said.

When it comes to Streamer, Sciaino tells me he had already been playing around with the idea of making an endless runner. When Ford approached him to create a game for his song, he said, it seemed a perfect place to try it out. “He had the idea for a floating avatar in third-person view versus only the first-person perspective, which really opened up my idea of using different camera angles,” he explained. The idea was to allow players to direct their own video for the track, meditating “on the song from inside the 3D landscape rather than just watching it.”

What’s more is the idea really works. As I directed my avatar—which is actually a 3D model of Ford captured using 123D Catch—I found myself, almost subconsciously, changing camera angles to the beat of the song, enjoying it more than I would as a passive observer. Its interactivity is the key to its success. I kinda love it … and I don’t even like electronic music.

Sciaino, too, was struck by the song—mainly its drum pattern, which he used as influence when creating its visual counterpart. “They start as a seemingly random stream of general midi and get reeled into a controlled loop,” he said. “Similarly, the log and particle effects in the game seem random at first but playing long enough makes you realize you’re in a controlled repeating environment.”

Streamer was released in promotion of Ford’s new EP, No Origin, out September 16 via Driftless Recordings. You can check out the game here at the link, you can also follow Ford and Sciaino on Twitter.