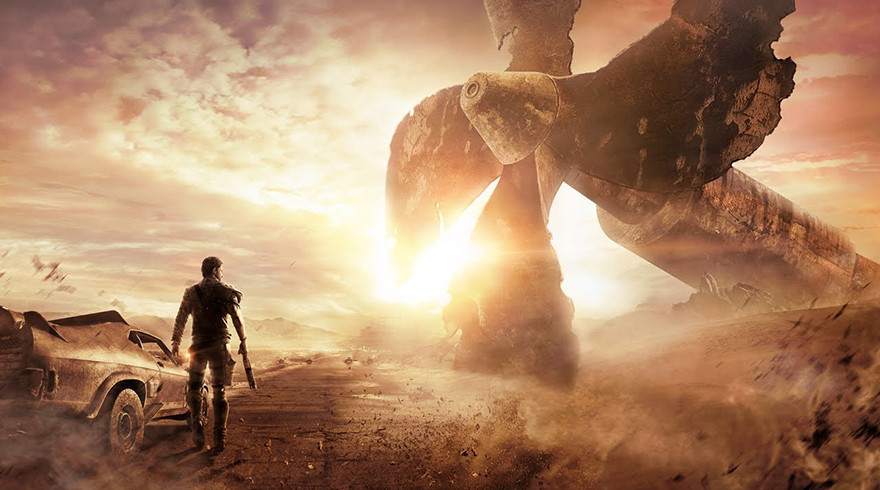 Seventy-five minutes into the film Mad Max: Fury Road, the endless desert gives way to a swamp. Pools of water and muck scatter the plain as crows circle and caw. Masked figures skulk through the mud on stilts while Max and the other main characters, just passing through, look on, bewildered. It is a powerful and perplexing tableau, and no one speaks of it. A few seconds later the scene is over, and we are in the desert again. While we later learn that the marshland was in fact the decaying remains of what used to be a verdant paradise, nothing else is elaborated upon or explained: the stilts, the crows, the masked figures … they remain a brief, tantalizing glimpse into a sliver of the post-apocalyptic Wasteland that we will never fully know. It is moments like this that give Fury Road its brilliant sheen; the world is so rich, so specific, there just isn’t time to get into it all. 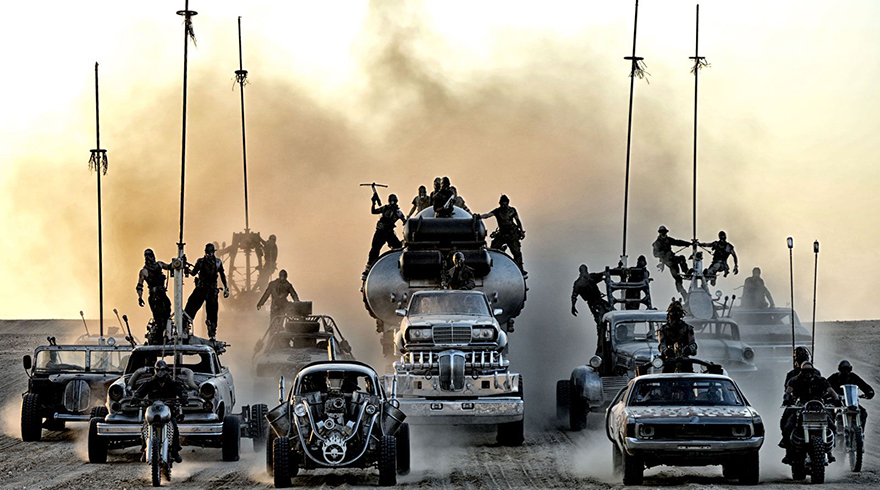 Seventy-five minutes into the videogame Mad Max it is clear that all will be explained. Anything worth exploring has an icon stamped on it that you can see floating on the screen from hundreds of yards away. Wastelanders wait patiently behind rocks to tell you all about that camp over there. Your faithful companion—a “black-finger” super-mechanic named (sigh) Chumbucket—is constantly chittering on about whose territory you’re in right now, their strengths and weaknesses, likes and dislikes.

Avalanche Studios’ version of the decimated outback is algorithmic in all the ways George Miller’s films are not. Mystery and weirdness are replaced by logical processes that allow you to master the land through collecting scrap and dismantling rival ganglords’ territorial grips. Want to sabotage that oil refinery camp? No problem. First take out the sniper (they all have one). Go inside and kill the war crier (they all have one), lest he inexplicably buff his allies’ fighting prowess. Kill all enemies using that Batman: Arkham Asylum combat system we all know so well. Find a gas can. Ignite it. Place it in front of the oil tanks. Repeat this process like a billion times. 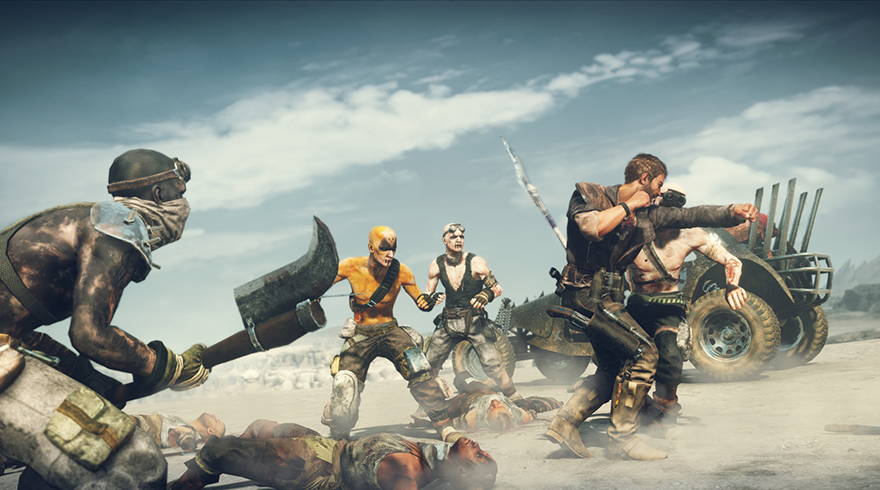 The point of the game is to help Max build the bossest car—dubbed the Magnum Opus—which he vaguely says he needs in order to cross the Plains of Silence, i.e. drive off into the sunset and leave this wretched world behind. Accomplishing this task requires the ongoing help of (sigh) Chumbucket—who reveres cars and their drivers with a religious fervor—as well as the resources of increasingly powerful warlords, who demand all manner of inane “go find me five of these” tasks before Max is proven in their eyes.

Once I realized that Mad Max would be a never-ending spiral of scrap collection, camp sabotage, and errand-running, I decided to get in my car and just start driving. Would I find something, anything, that could spark my imagination in the way that 10-second sequence in the middle of Fury Road did?

Mad Max never yielded the magical moment I so craved.

In a word, the answer is no. It’s just more desert; more convoys and minefields and scrap heaps and camps; more icons.

Aesthetically, there is high-quality work being done. The environment is beautiful in its starkness: from high vantage points, heat lines come off the land and give the impression that every distant structure or rock formation is a bleary mirage. Max trudges with a felt heaviness, as though the sand is sucking at his feet while the burden of his past presses down on his shoulders. Voice-acting is also well done, with many characters bringing back the franchise’s Australian twang that Fury Road largely omitted. But Mad Max never yielded the magical moment I so craved.

The reason stems from how it handles its open world. Because so much of the game is about driving, building your car, and vehicular combat, the game favors topography—at the expense of much else. Well-worn roads give way to sand dunes which mellow out into crunchy salt flats, and each one has palpable impacts on steering, acceleration, and lift. Driving can be a thrilling exercise, particularly later in the game when your ride gets really souped up, but it never quite justifies the largeness of the game’s physical environment. Everything on the map that isn’t on wheels is perfunctory: spots to loot resources, or start a race, or gather intel, each indistinguishable from the others. Coming so shortly after The Witcher 3, an open-world game which filled its vast expanses with rich, human stories, Mad Max comes across as ill-suited to the genre. Whereas the films explore emptiness in the existential sense, the game takes the concept literally and winds up repetitive and devoid of intrigue, despite its size. 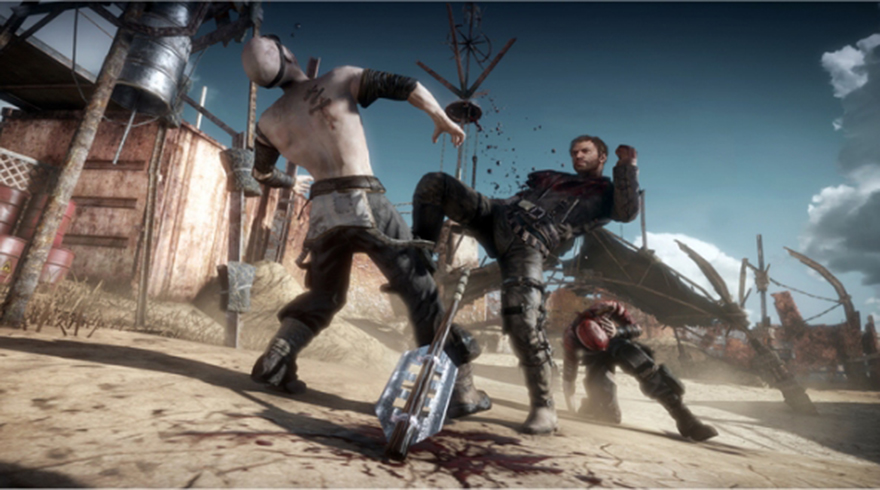 There are glimpses of what the game could have been had the developers taken a different approach, focusing less on the formal aspects of car customization and building a drivable landscape, and more on capturing the wildness and desperation so prevalent in Miller’s films. At one point I arbitrarily popped out of my car to pick up some scrap (clearly marked on my mini-map) scattered about what looked to be a small boat, half-buried in sand. As I held “X” to pick up the scrap, I noticed that a few feet away lay a tangle of skeletons, long dead and picked clean. “Looks like they died embracing each other,” Max said of his own accord.

Nothing more could be done in this moment; there were no icons to guide me or actions to take that would improve Max’s rank. I felt the loneliness of the place more profoundly than hours of driving through its hazy nothingness could achieve. The moment felt unquantified, real—the opposite of finding one of the pre-apocalyptic photos or notes strewn about the game, dutifully marked. These items are clearly intended to evoke some sense of humanity lost, but they feel too curated. And it doesn’t help that upon finding them, they are promptly added to your “Collectibles” screen like trading cards.

It delivers a vast, meticulously rendered desert with nothing special to see.

Storms are also rare but exhilarating events, when everything goes black and fire rains down from the sky. One struck while I was staking out yet another camp, planning my method of eliminating perimeter defenses and the war crier within. Suddenly I was lost in a swirling miasma of debris, driving like a maniac to avoid incoming lightning bolts. As I did so, I started receiving on-screen messages that the camp I was near was being completely dismantled by the storm, obviously as unprepared for it as I was. Once everything finally calmed down, I walked into the camp and took it down with minimal resistance. It was refreshing to experience something that felt lawless and unpredictable—two qualities endemic to the Mad Max films—in a game that otherwise strikes as so conventional.

Perhaps this outcome was inevitable, as the reality of any game’s so-called open world can never live up to its promise. Film is protected by linearity and narrow focus; Fury Road and its preceding entries offer precious morsels of the Wasteland that, in their brevity, suggest a rich world blooming just out of frame. There is no imperative to deliver on that suggestion; in fact, I prefer that the true nature of the stilt-walkers remains unknown. By granting me what I thought I wanted—free reign to explore—Mad Max pushes its source material out of the fast and tantalizing drive of action movies and into the slow, repetitive plod of open-world action games. It delivers a vast, meticulously rendered desert with nothing special to see.