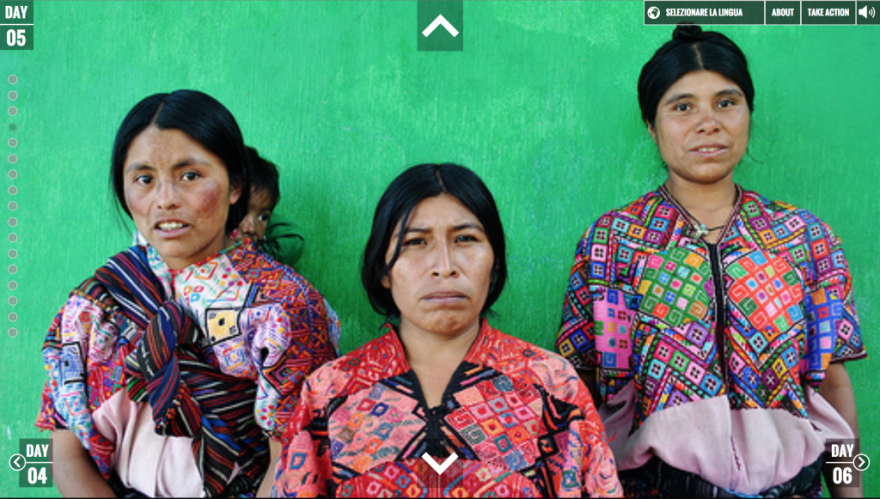 Sometimes, we think of disasters as detached from human influence. We believe them to be the makings of fate, or the random and unpreventable shifting of tectonic plates.

But as the Disaster Resilience Journal, a serialized interactive documentary being currently over 42 days, says, “following decades of climate change and a deepening divide between economic and social parties, the effects of elemental catastrophe have intensified.” The journal, currently on its `fifth day, reveals just how human-shaped the problems, effects, and solutions to these natural disasters really are.

A slow shift has been taking place in the language and funding for dealing with climate change: one that’s moving away from prevention and toward adaptation. Unfortunately, as a co-creator of the Disaster Resilience Journal says on the Helios Design Labs blog, “risk and vulnerability have not been served out in equal portions around the world.” Adaptation is more than a language shift for highly impoverished and at-risk areas, where the effects of climate change are devastatingly immediate. According to the IFRC (International Federation of the Red Cross) and European Commission (who funded with awareness campaign) “in the last 20 years disasters have killed 1.3 million people and affected 4.4 billion.”

It is easy for our brains to gloss over these insurmountably large numbers, especially when they describe such an incomprehensible loss of human life. The Resilience Journal, weaving hard facts about the 24 countries it covers along with the pictures, words, and sounds of the people weathering the grueling conditions, grounds these impossible numbers to our shared reality. The utilization of data mapping on day 3, on the other hand, lays out the interconnected relationship between GDP, climate change risk, and gender inequality on a global “Vulnerability Map.” And while the relationship between socio-economic disparity and vulnerability are stark, the map also suggests that—in an inextricably connected world—the effects of disaster will be felt by all, regardless of immediate risk.

But the daily stories, which told and shared through social media, games, live events as well as the interactive journal, detail as much of the triumphs of human beings as the monumental devastations. Day two opens with some startling facts about the violent typhoons which swept across the Philippines in 2013, taking thousands of lives and millions of homes. Only, the next slide features a fierce local Red Cross volunteer named Lenita Macavinta-Diego, calling for no casualties in their tiny town of Aliputos. The story that unfolds spends equal time on the area’s marked vulnerability as it does on the rigorous local action to prepare for the storms. The efforts of which resulted in zero loss of human life.

You may recognize the co-collaborators of the Journal from their previous achievements in interactive storytelling. Elaine McMillion-Sheldon is the Peabody Award-winning director of Hollow, while Mike Robbins hails from the aforementioned Helios Design Labs. Both emphasized how the daily aspect of the project worked to show the immediacy for the issues our globe faces today. “With climate changing daily and all these disasters happening on a daily basis,” Sheldon says, “the journal allows people to really jump in where they find their interest most.” The shareable aspects of a serialized interactive journal, she continues, can spread awareness far and wide while also benefiting from the potential of many entry points.

Robbins emphasizes that “time is at the core of resilience and sustainability, like how long till the next super storm, how long can we go on the way we go on, how long until we can make things better. So the daily aspect is there as an attempt to make real this sense of time, that we can’t or shouldn’t have everything all at once.”

“We all need to be resilient.”

First and foremost, the project showcases a strength that many of us might not have needed to summon yet, but which all of us must live up to eventually. And soon. “We all need to be resilient,” Robbins states, “each in our own way, but we can’t do it alone.” Every story of survival is one of banding together: through the tireless efforts of a local community and/or leader, along with the international structures in place to ensure they are provided the proper tools to utilize the full extent of the community’s resourcefulness.

“We learned a lot from this project,” continues the Helios Design Lab blog, “not the least of which was the re-affirmation that the earth is a beautiful place, and that our lives within it, no matter how precarious, deserve to be lived the best way possible, and that we all have a common responsibility to ensure, in our own small or large way, that this happens.”

The interactive journal provides a Take Action tab with information on how to share the daily stories on social media and how to volunteer. Many of the stories, along with a What is Resilience section, provide practical information on how a community prepares to weather dire elemental conditions.