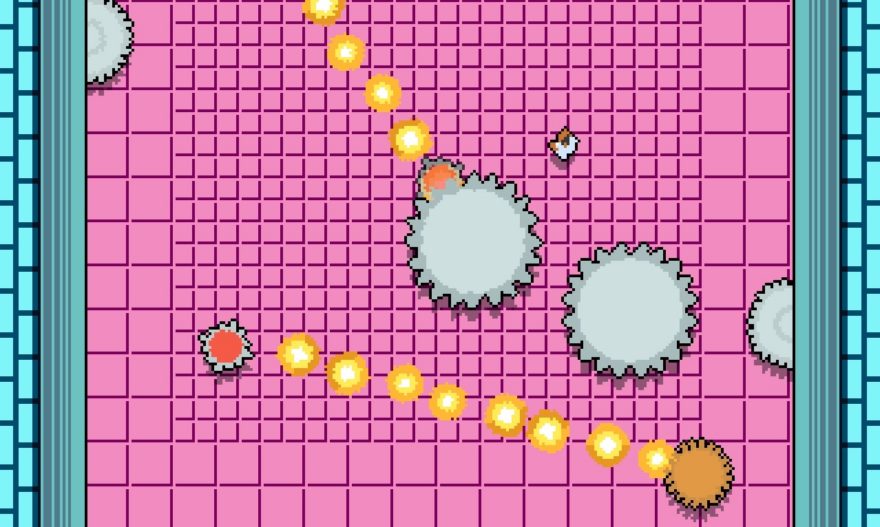 If there’s one thing that Disc Room shares with Vlambeer’s games—the studio for which creator Jan Willem Nijman works under when he’s not toiling away on other projects—it’s the ability to get all the action packed into a single GIF. That and screenshake. Of course it has screenshake.

Disc Room is a game of avoidance—what Nijman calls a “dodge-’em up.” You need to survive 30 seconds in a cramped arena in order to grow old in this spin-off of 70s-inspired dystopian science fiction, including Logan’s Run (1976) and THX 1138 (1971). Your only weapons against the evil discs trying to smear you across the walls are your wit, some reflexes, and the occasional use of slow motion. You better hope it’s enough.

The game’s got impeccable talent behind the scenes, too—that is, other than Nijman. Design duties are shared with Kitty Calis, who’s previously worked with Ragesquid on Action Henk (2015), and she also did the art on the project. There’s also Doseone, co-founder of hip hop label Anticon and musician behind the soundtracks of Gang Beasts and Enter the Gungeon, who is responsible for the sound and music contained in the game. You can see (and hear) the signs of this quality production team every time a disc scythes the player apart.

How Disc Room came to be, however, was a little more higgledy-piggledy. “Humble Bundle asked us earlier this year if we wanted to make a small game for them,” said Nijman, “it seemed like a very refreshing thing to do after both wrapping up huge multi-year projects with Action Henk and Nuclear Throne [2015]. Various ideas were tried and scrapped, and eventually we came to the concept for Disc Room.”

It seems to have been an appropriately scrappy production for a similarly scrappy game. A game in which you’ll unlikely to last longer than 10 seconds as giant buzzsaws and laser balls are shot at you in a tiny arena. If this is to be our future dystopia, at least death will come fast and bloody.

Disc Room is currently available exclusively to subscribers of the Humble Bundle Monthly service. The bundle for August goes out today so if you want it you’ll have to move fast. There’s no word on if it’ll emerge onto other platforms at any time soon.