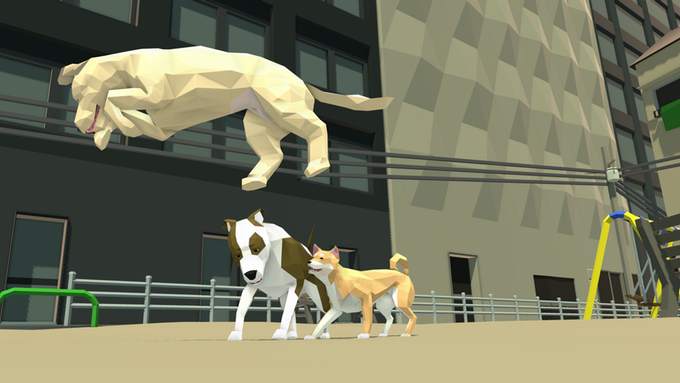 Since I’ve known him, he’s always been a really happy guy. But Dax started a good portion of his young life without me. All I know is that, at about five months of age, he was surrendered at the local ACCT with a clipped ear, grossly emaciated, dehydrated, and covered in his own excrement. A few days after Christmas, New Life Animal Rescue picked him up— all 12.5 pounds of him— and nursed him back to health. The woman who took him in said that, by the way he looked at her in the car on the way home, she could tell Dax “knew he was rescued.” And by that she meant Dax knew he could stop feeling alone, lost, and afraid.

I don’t know if Dax was really thinking that as he left the pound—or, for that matter, what he was feeling those first five months of his life. Today, I think Dax feels so comfortable in his environment, he pretty much assumes I’m the guest.

Dax is a good dude. I know that for a fact. But I often wonder who he is without me (and all my anthropomorphizing). Who is this four-legged creature when he is devoid of my companionship, when he is just a dog and not my dog?

We often have a hard time thinking about dogs outside of a human context. And I don’t bring Dax’s story up as a harrowing tale about my or the rescue organization’s “generosity” (to reiterate: I am not the dog parent from that Amy Schumer skit). I bring it up as a demonstration of just how unavoidably affected dog’s are by human existence. I bring Dax’s story up as a demonstration of just how uninviting we’ve made our world for the animals we’ve evolved to become entirely dependent on us. It’s a human-eat-human world out there, and for the millions of dogs and cats left homeless each year in the U.S. alone, they know how rough it can get.

how unavoidably affected dog’s are by human existence

For the longest time, I’ve wanted to experience just a little of what my doofus dog (who can’t walk up the stairs without tripping) must’ve experienced when he thought he had to fend for himself in a human world. And for New York-based designer Kevin Cancienne, that’s exactly what inspired his dog-em-up game Home Free, which just launched a Kickstarter today.

In Home Free, you play as a dog let loose on a procedurally generated city full of humans, food, playgrounds, and other dogs. As the Kickstarter video demonstrates, you are inexplicably left without your human in this unruly world, which means you must forage for shelter, scraps, and friends wherever you can find them.

In a past interview with Kill Screen, Cancienne explained that, to him, one of the biggest appeals about exploring the life of a stray dog was just “how alienating it can all be. As a dog, the city wasn’t made for you. You’re the wrong shape and the wrong size and there are tons of places you’re not welcome and you don’t quite understand how it’s all supposed to work.”

It’s up to you as the player to figure out how to survive in a world where you’re ability to communicate with the dominant species basically comes down to begging or stealing. A few are willing to help. But mostly, humans prove to be either afraid, annoyed, or angered by your presence. Other dogs aren’t much better, either, out of the need to defend their own territory or out of a more basic mistrust of others. But, as the Kickstarter campaign says, things can go better given the right circumstances. After all, “A sniff, a chase, and a romp through a park is all it takes to seal a friendship.”

You might remember Home Free from its earlier days as the local multiplayer known as Dog Park, which premiered last year at NYU’s No Quarter show. Added as a bonus mode to Home Free, the dog park mode proves a much more laid back experience, where your friends can know the joys of human-free doggie playtime.

Cancienne says this portion of the game was “inspired by the non-zero-sum dynamics dogs show in play.” Without a points system or a scoreboard to keep track of who’s winning or losing, the canine play style proves much more freeing than your typical videogame. Because, “when it comes to play, the dog’s only goal is to keep on having more fun.” So, understandably, you’re only struggle in dog park mode (besides wrasslin’, barkin’, and wagglin’) is to get one more tug of war out of your best doggie friend.

“you don’t quite understand how it’s all supposed to work.”

Though, if you’re a dog owner, you know that no matter how good the simulator is, no human could ever live up to the stamina for enjoyment, love, and fun the average dog has. I guess for that, we’ll have to wait until Home Free is playable on the Oculus or something.

You can support Home Free on Kickstarter here. Also, be sure to follow Cancienne on Twitter for daily dog GIFs and vines to brighten your day.