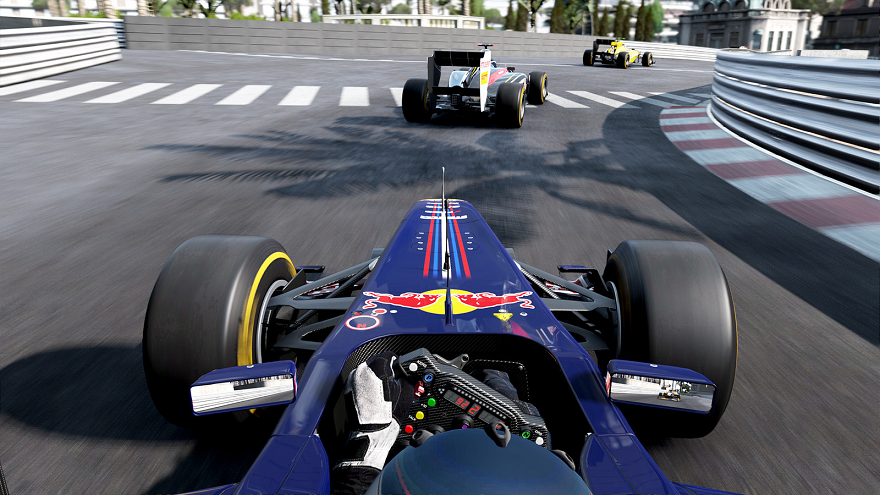 Spend some time with Project CARS and you’ll be fed up with how unforgiving each turn is on your over-eager vehicle. Spend a little more and you’ll grow to appreciate each unique, licensed hunk of steel as it groans under the stress of constantly alternating between accelerating and braking. But play any more and you’ll start to feel slightly detached, barreling aimlessly between locations and race courses; searching for something behind how beautifully the Monaco sun licks the hood of a casual BMW Z4. Project CARS isn’t all things to everyone, but it certainly prides itself on being a lot of things to most of them. And yet despite its combination of dutifully precise recreations and breezy toggling between modes, something in this David to the Goliath of Forza and Gran Turismo plays like a finely tuned machine without a soul.

For Slightly Mad Studios, that may arguably be the point. In an interview with TeamVVV prior to the game’s release, creative director Andy Tudor claimed that when it came to the sim racing genre as a whole, realism was king. “Being the most accurate representation of the real-life thing,” he explained, “is the criteria that will give you an edge upon your competitors and put you one step closer to perfection.” For a game that ostensibly wants to bridge the longstanding gap between sim and arcade racing, however, this vision of “realism” feels dishearteningly narrow at times. When it comes to driving cars fast, meticulous modeling and detailed rendering is a solid foundation on which to build. It’s not enough, though.

For many people, getting into the driver’s seat of their car is the most intense augmented reality they’ll ever experience. Driving a car isn’t entirely unlike being a cyborg, except that instead of having a small piece of technology implanted into your body, it’s you who are implanted into it. Steering wheels, car seats, and mirrors can all be customized to the individual user. And while being strapped into a car is first and foremost a safety feature, it also helps the driver get a better feel for the car’s inertia as it accelerates and shifts direction. Play a racing game at home or even in the arcade, and you’re lucky if the wheel or controller rumbles naturally enough to not jar you from the illusion unfolding on the screen. Push 80 MPH on the state highway in an economy sedan and it becomes your defining connection to the vehicle and the road.

This is why, unless you’ve invested thousands of dollars in a racing setup, the appeal of sim racing is so technical, and predicated so much on the prowess of a game’s visual minutiae. Like a disembodied head, the thrill of millions of particle calculations unfolding in real-time has to be communicated through sight and memory. Project CARS offers a number of ways to customize, and, more importantly, to minimize its HUD. But why would you? Outside of the occasional desire to take on a new track blind or race a familiar one from memory, the opportunity to pretend like you’re not actually playing a game called Project CARS is one that Slightly Mad Studios isn’t quite able to fulfill. Without being able to feel the weight of the information conveyed by the environment as you whip around its curves and accelerate down its straightaways, fighting for tenths of a second on the last leg of a Formula 1 circuit sometimes feels like gliding off the edge of a cliff in a dream: harrowing but insubstantial.

Project CARS isn’t alone in suffering from the limitations of a simulation, but it is notable for the ways in which it doesn’t try to distract from them. The designers at Slightly Mad Studios made a point of opening the game up and eschewing the conventional career modes of most arcade racers. Opening the start menu in Project CARS is like pulling out a brief case of misplaced matchbox cars. The possibilities are finite, but not obviously so, with the ability to race just about any car on any track, right from the get-go. No more racing against the game in order to unlock other parts of it, cursing the predictable quirks of uninspired AI as they tarnish your record and keep you from obtaining your favorite muscle car. Indeed, the AI in Project CARS is perhaps its most laudable accomplishment, carving out a nice middle ground between the rogue moments of Forza’s driveatars and the fascist accuracy with which AIs maintain their place in other games. Even if Project CARS is far from passing any sim racing-style Turing tests, it takes great strides in making races feel like they haven’t all been populated with the same batch of clones.

The same can’t necessarily be said for the game as a whole. One of the virtues of a sandbox is that it doesn’t manipulate you. There’s no rulebook to follow or train tracks to stick to. Unlike other toys, it plays on the possibilities percolating around inside of the person sitting in it. The drawback is that every grain of sand looks like every other, and when the well of inspiration runs dry, so does the fun. Project CARS has a career mode, but in keeping with its ideals, it doesn’t so much provide the architecture for a narrative so much as the simulation of one. With the ability to manipulate AI difficulty, steering assists, and a wealth of other, more minute details, working up from karts to hypercars and beyond feels both precise and meaningless. Locking cars behind arbitrary mile markers might be a cheap trick, but it’s one that also works, like handing a kid in a sandbox a dump truck to get her thinking.