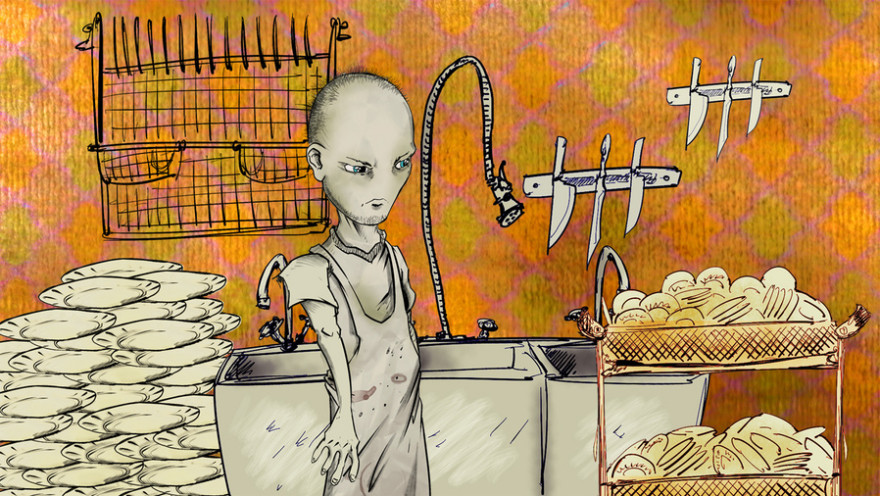 I’m not surprised that The Dishwasher is the second videogame of that name featuring a kitchenhand committing acts of violence.

Having done the job myself for about five years, I know the angst that builds up inside you every day, like so much uneaten rigatoni beneath your fingernails. When you find yourself between red-faced chefs on one side, tutting customers on the other, and you’re earning the least amount of money for the grimiest job, sometimes you caress the knives in your sink with a sponge like a killer wiping the blood from their blade.

The Dishwasher captures the anger that you can scrape from the bottom rung of the proletariat.

The Dishwasher is about doing something I dreamed of so many times. You come out of the sink, out of hiding, dragging your trolley of dirty dishes into the dining room, and throwing them at as many nagging, haggard, and needy customers as possible.

“Will you become rich?

Will you make a living wage?

Will you remain poor?”

In between the three stages of customers exploding into bloody fireworks with each direct hit, you’re told you’re becoming richer through being violent. As if to say that honesty and hard work gets you nowhere, and in fact, the backstabbing and dirty play of employees looking to climb the career ladder—the kind of two-faced violence that exists in smirks and brown-nosing—is the only way to progress. It’s hardly a false message.

As each filthy plate is thrown, a voice shouts words that the dishwasher would hear every day, words that define his existence. It’s the only retaliation he has: “Bacon,” “minimum wage”, “leave a tip”, “ribeye steak” “wash your own dishes”, “scattered, smothered, diced”.

The Dishwasher captures the anger that you can scrape from the bottom rung of the proletariat. But it’s not pure emotive release. More subtly, it’s also a commentary on the unjust conditions of the lowest paying jobs, and how current capitalist systems benefit the few greatly, but treat others as worthless as the greasy chicken bones they scrape into the garbage.

The message isn’t of promoting violence against others—the customers are faceless sprites that waddle in line (they’re not human)—it’s an expression of real feelings experienced by those doing their best to survive when everything is against them. Something as trite as a complaint about a tiny crack on a coffee mug is enough to turn you nuclear.

You can play The Dishwasher in your browser for free, or you can download it from Game Jolt.