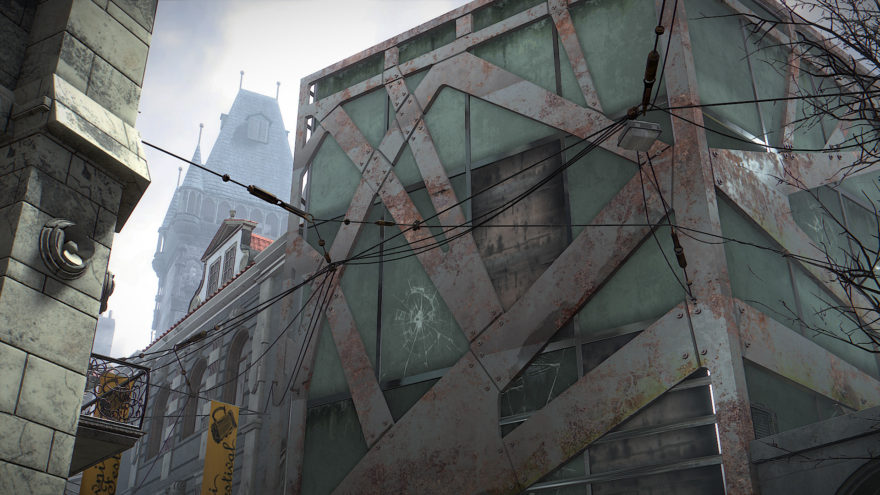 To me, Prague has always felt like a city uniquely in communion with the past and future versions of itself.

I remember my first visit, a local friend taking me to the once mysterious, now legendary Cross Club: an amorphous labyrinth of scrap metal occupying the lower floors and basement of a decaying, communist-era panelák. Stumbling past the ubiquitous leather-clad and shorn-headed bouncers into one of its dancefloors was like wandering into a William Gibson wonderland, bubbling tubes of mysterious green liquid and angular metal pillars surrounding a stage backed by a whirling sculpture of metal and LEDs. My friend pulled me into the next room, a cat-walked, claustrophobic space like a dayglo version of the inside of The Matrix’s (1999) worn-out hovership, the Nebuchadnezzar.

Yet the next day I found myself in a different fantasy entirely, wandering beneath the dripstone wall of the Wallenstein Palace’s gothic grotto. A work of medieval devilry, it was designed to help its affluent owners consider the slow decay of life, the dark nature of existence and the romantic power of nature. Among the strutting peacocks I gazed up at its accretions, their 500 years of slow growth forming grotesque faces and bodies, like human forms but tumorous and overgrown.

the perfect concrete image of a city of split histories

To find this striking balance, between imagined histories and imagined futures, in Deus Ex: Mankind Divided depiction of the iconic city was something of a surprise. Among the crude metaphors for the social divisions of race and class, and the comical kleptomania of its protagonist Adam Jensen, the game manages a detailed and nuanced portrait of a city of disjunctions.

First, there is the disjunction of monolithic history and garish tourism, epitomized by the idea of the “old town,” which has marked out historic centers across Europe as Disneylands of potted history. For a visitor to Prague, this atmosphere is unavoidable, and in Mankind Divided it is equally ever present. Luxury shops, vast digital billboards, flashy clubs, westernized cafes: images of commercialization at any cost are present wherever you turn.

Onto this, Mankind Divided grafts a language of disjunctive high-tech and brutalist architecture, entirely suited to both the communist-era monoliths and techno-fetishist fashions of contemporary Prague. Perhaps mirroring the games central theme of “natural” vs “augmented,” this pursuit of urban contrast serves instead as the perfect concrete image of a city of split histories, bringing to mind the real Prague’s Nová scéna, Žižkov TV Tower and Frank Gehry’s “Dancing House”. It’s a rare thing in games to see a city like Prague, with its medieval storybook reputation, to be depicted so honestly as a compromised, disjointed thing. 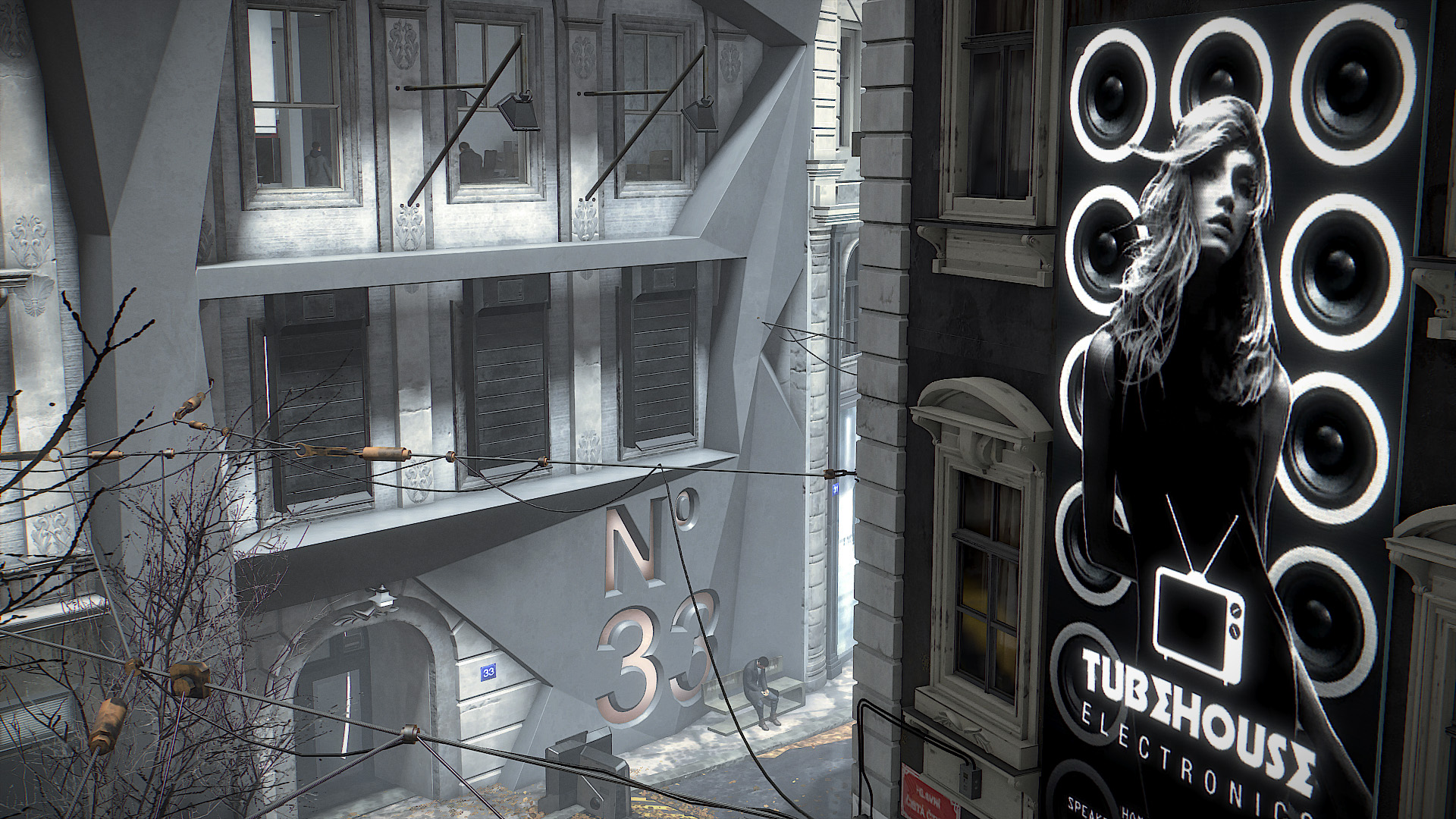 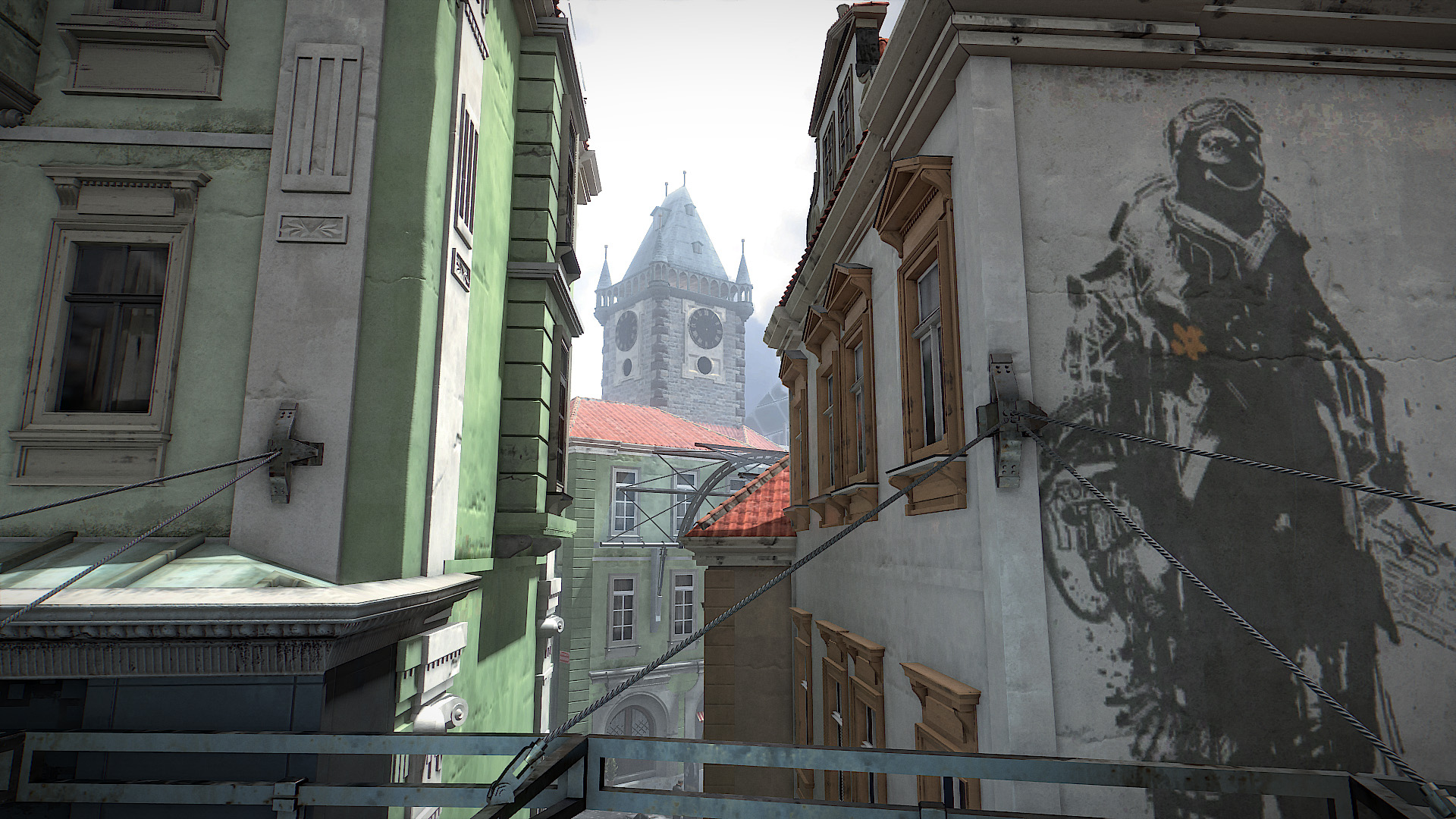 Yet, lingering on the outskirts of its small central fragment of Prague, Mankind Divided also presents the Prague that huddles around this complex, fractured heart. Though more run-down and bombed out than the Prague of today, the red-tile roofscape and fading colors of the painted houses are instantly recognizable, as are the layers of graffiti obscuring them. The courtyards of these streets hide peaceful sanctuaries, the buildings around overgrown and crumbling.

Within this sepia-toned imaginary Prague, Mankind Divide hides a distinct Praha treasure; a rambling bookshop in a turn of the century style. Though incongruous in a paper-free future, Mankind Divided is right in thinking that the city of Franz Kafka, of Jan Neruda, of Milan Kundera, and Vaclav Havel would never give up its books. After all, the imagined Pragues of these writers, are cities in their own right, converging playfully around some indescribable thing.

Yet Mankind Divided also reshapes Prague, contributing its own image to the catalog of imagined images and atmospheres that animate the city. Golem City, a towering pile of prefab metal housing units on the outskirts of Prague, a ghetto for the augmented humans cast out by society, feels extravagant in comparison to the more nuanced hub of Prague. It is the fantasy of the Prague’s infamous techno scene shorn of its playful attitude, and expanded to form a seemingly vast and ornate urban space. I say seemingly, because while the game’s image of Golem City is multi-layered and cut through with endless passages, it is a surprisingly corridored game-space, leading you by the nose through irreducible kipple-packed environments.

This is a cyberpunk standard, hammered into a shape that fits into the Czech Republic. The presence of huge bundles of wires, wreathing the streets in dark shadows, is less a reference to Prague’s ever-present tram and telephone wires, gathered here and there, but more to Golem City’s true origin: the cyberpunk ur-city of Kowloon. The Kowloon Walled City, with its densely packed apartments, its near constant darkness, its dripping wet streets and stories of triad law have made it a powerful influence on the imagery of cyberpunk.

Despite being demolished in 1994, its ghost has slipped into the imaginations of artists and designers across the world, rebuilding it digitally in games and films over and over again. Here it finds some points of connection with Prague, its improvised street furniture and rigorous cataloged low-fi markets feeling appropriate for a city known for its junk shops, and descending into it I can’t help but think of the Cross Club, with its liberally borrowed references, and its playful use of scrap to build a perfect cyberpunk stage set. There is even a central sculpture, hammered out of florescent tubes and abandoned tech, which wouldn’t be out of place behind the DJ booth. On closer inspection I find a pair of shoes hanging by their laces from its center. A comically human detail in an extravagant fantasy. Yes, that does feel like Prague after all.