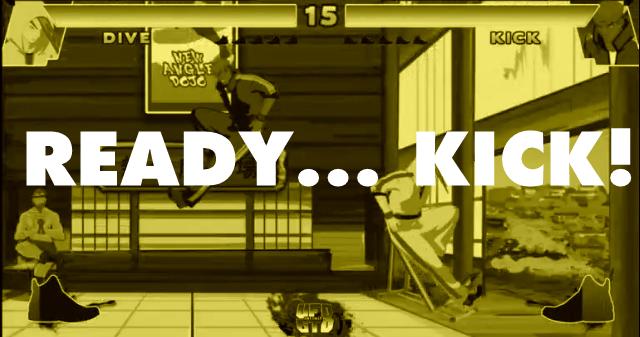 The one game that most captured the hearts and minds of PAX East attendees, at least from my single point of perspective, was a one-on-one fighter by Iron Galaxy Studios called Dive Kick.

But that’s not quite right; “fighting” ascribes a level of nuance absent from the experience. Fighting might entail walking toward your opponent. No such act exists in Dive Kick. Many fights comprise clenched fists thrust toward another’s face (so I hear). Again, this so-called “punching” has no place in Iron Galaxy’s latest. Dive Kick boils down traditional videogame combat into a balletic tete-a-tete of risk and reward, wrapped in the spirit of 1980s ephemera.

Your two inputs are “DIVE” (jump) and “KICK.” Hold the dive button longer for a higher jump. Press kick in the air and you perform the titular “divekick.” Pressing the kick button while grounded makes you hop backwards. This is all you can do. Somehow, this triptych of movement seeds the ground for a furious battle meant to be viewed en masse, meant to be played again and again, until you master not a mechanical system or memorized combos, but human instincts.

The key to victory is strike-height: the highest dive-kicker will always make contact first. Each combatant starts with a generous 10,000 hit points. Divekicks are tremendously powerful, though—a single impact causes a billion hit points in damage. Each kick is fatal, then. First one to five kills wins. Done. Easy. Simple.

And the crowd grew, and gathered, and roared with each victory. The defeated sulked away, only to return, wiser, ready to divekick once more.

As I sit here typing notes from the day, endless waves of the 60,000+ attendees stream by my patch of carpet. I hear: “You dive, then you kick—that’s all.” I thought maybe my moment in front of the booth was an aberration. But no. Talk of Dive Kick echoes throughout the people.

The brutality of the divekick makes each movement tense; the fast turnover between rounds causes a heightened cycle of anticipation and release. Hence the ample opportunity for mass exultation.

The warriors who practice dive-kickery are noble and varied. Rendered in two-dimensional sprites, they represent a diverse cross-section, from a confident werewolf to a slovenly chubster to a street youth in a jumpsuit who keeps his hands in his pockets. And it’s this image—of a character in a videogame so at ease, yet so focused as to not require use of his hands, the very thing we as players use to manipulate our digital selves—that taps into why this game and no other would rise above the Expo Hall’s impossible din.

Strip away the polygons, the bump-mapping, the online servers, the artificial intelligence, the NPCs, the story, the lore, the unlocked abilities and power-ups and combos and levels and mission objectives. What remains? Two opponents, face to face, trying to best the other for fun and sport. Dive Kick is the 21st century’s Coliseum.

To be fair, Iron Galaxy performed a bit of cheap magic to gain the people’s interest. On the showfloor you don’t hold a PS3 Dualshock controller, or a PlayStation Vita, the two lead platforms being developed for. (Though the developer stressed their attempt to gain traction on Steam Greenlight, indicative of where the masses are found these days.) You stand over two giant buttons the size of halved canteloupes. You’re transported to a carnival, seven years old, life boiled down to simple dichotomy.

To dive and kick now requires physical exertion. Each slap of the button makes a satisfying sound, of flesh on plastic, with an easy give to the input that parallels a tensed calve muscle lifting you into the air. Again we become as children, reaching to push a button just to see what happens.

I stepped up to divekick for glory. My competitor spoke of previous victories, agonizing defeats; he was battle-tested. I was not. Still, the two large buttons promised hope, a prospect of faked skill or stumbled-upon grace. My street punk hopped backwards, then leapt high. My competitor’s ninja assassin jumped immediately and thrust down, plunging heel into my capped skull. “Head shot!” touted a cartoon speech bubble, mixing the nomenclature of today’s youth with the formatting of yesteryear’s. But there was time to defend my honor.

I slapped and feinted at the orbs with the urgency of a confused infant at his first lunch. The ninja fell under my diving kicks once, twice. But his experience overcame my chaotic flailing. I jumped too high and missed; the ninja’s quick double-hop back followed by a short strike landed the finishing blow. On-lookers cheered for the victor, my death validated as a means to unite strangers.

There’s a hunger for experiences that leverage our innate impulse to compete, unburdened by the high wall of access and learning many modern games require. One Dive Kick‘er boasts after a close victory: “It’s better to master two moves than 20,000.”