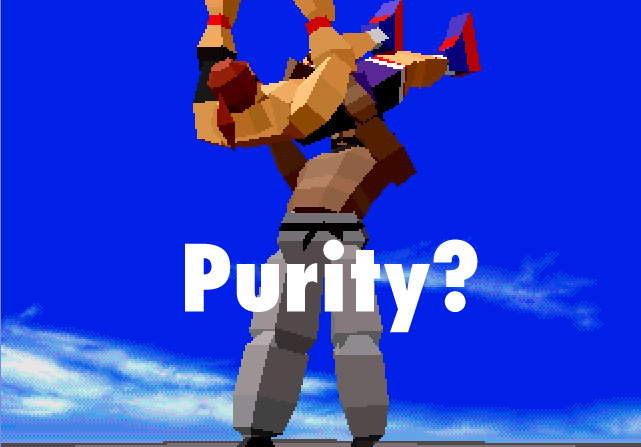 The trouble with modern fighters is that they come with a course load the size of a Heidegger class. Having a mean right hook won’t get you very far. The idea is to become one with the punch, to watch the punch over and over in slow-mo, to learn the precise timing of that punch. Studying frame data, cancels, links. Enough!

This fall, two fighting games will hark back to the days when delivering a proper beat-down didn’t require delving into YouTube tutorials.

This fall, two fighting games will hark back to the days when delivering a proper beat-down didn’t require delving into YouTube tutorials. One, Killer Instinct, lacks technical refinement because the series has been hibernating since the ‘90s. The other, Divekick, is part of a minimalist movement among indie battlers. Both are trying to answer the same koan: how do you craft a complex modern fighter that, well, isn’t so complex?

For Adam Heart, the lead designer of Divekick, the short answer is with two large plastic buttons, dive and kick. No need for joysticks. “If you can drive a car, that’s much more complicated that playing Divekick,” he assures me. His game is unique among fighters because the only thing the player can do is dive, i.e. jump, and kick.

The long answer gives us more to chew on. “There’s different kinds of complexity,” he says. “There’s technical complexity. What do I have to input to do something?” With Divekick, that’s pretty much gone. “There are no special motions,” he continues, “[but] then there’s the depth part.”

Since the act of walking is off limits (seriously, you can only dive and kick), there’s devious strategy to be found even in positioning yourself.

Divekick has depth coming out the ying yang. Since the act of walking is off limits (seriously, you can only dive and kick), there’s devious strategy to be found even in positioning yourself. “That’s key to fighting games. Everyone sees the flashy combos, but really what makes a great fighting player great is the screen real estate … the jockeying for space,” says Heart. His game is partly a spoof of the genre, the idea springing from a joke between him and a sleep-deprived friend one night at 5 a.m. Funny, but it plays great.

If Divekick does more with less, Killer Instinct is no holds barred. Its internal logic is thus: There aren’t too many combos in fighting games; they’re just too damn difficult. Double Helix Games, based near Long Beach, California, created a system of martial arts that flows free and easy. As a result, the game is overflowing with badassery. Almost every punch is a flashy burst, as if Jet Li is going to war with a werewolf.

This works well for a series that hangs its hat on spasticity. The worry is that it’d be too scatterbrained. In the past, rounds of Killer Instinct quickly devolved into flailing. To avoid that, the team has made some serious tweaks. “The current combo system has the code name 3.4,” David Verfaillie, the design chief, tells me. But don’t break out your trig calculator just yet.

He believes that number-crunching should take place in the studio. Players should get down to c-c-c-combo breaking ASAP. “We allow any strength double after a linker, reducing system rules to allow for things like opener -> linker,” he emails, dumbfounding me. Yet the conversion is simple: Do what you wanna do. It’s your thing.

That doesn’t mean they’re skimping on the details. At camp Killer Instinct, even designing a routine fireball is surprisingly intricate. They must decide how powerful the fireball should be. How many can be fired at once. How fast it moves at hot, medium, and mild speeds.

They must look at that fireball under a microscope, dissecting it sixty times per second. (This is to examine technical minutia, like block strings.) And they must make sure other characters have moves against said fireball—like absorbing it, or going underneath. The detail is there. You’re just less likely to notice.

It was inevitable that some fighting conventions crept in. But not many.

This is in direct contrast to how Divekick evolved. Heart made it sound like he just threw two stickmen on the screen and dicked around until the jumps and kicks felt right. “That’s this unquantifiable thing. Divekick is so different,” he says. “We couldn’t look at other fighting games.”

It was inevitable that some fighting conventions crept in. But not many. There’s a kick meter, which you lose when you get kicked in the head. Also, special moves were adapted (performed by pressing the dive and kick button in unison, in case you’re wondering). But they aren’t that special by fighter standards. One character jumps forward. Another can duck. There is even a fireball.

But unlike the half-minute-long assaults of Killer Instinct, one kick does the trick.