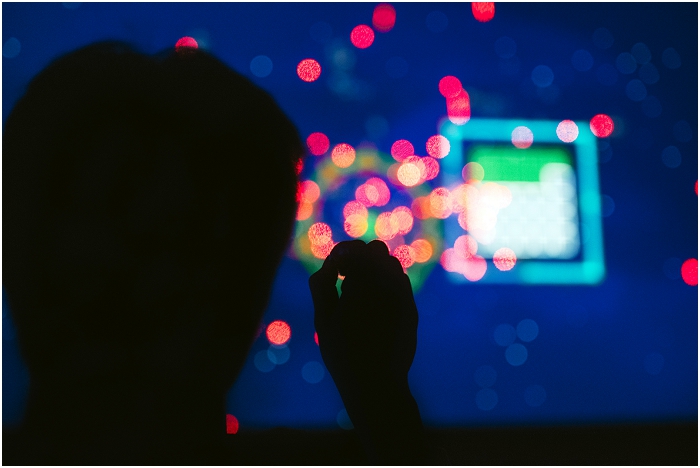 “I believe God made me for a purpose, but he also made me fast. And when I run I feel His pleasure.”

Thus sayeth Eric Liddell, the star of the 1981 Oscar-winning film, Chariots of Fire about two runners racing towards the same goal: winning a gold medal at the 1924 Olympics. Liddell’s competition is fierce and he finds a frenemy in Harold Abrahams, a wealthier, methodical foe. Abrahams ran to win, second place didn’t count.

Eric Liddell had a natural talent. He ran because he loved it, because there was still a life waiting for him after the finish line. Abrahams ran on tracks; Liddell ran on beaches. And although they raced for the same country, the stressful lifestyle of competing stretched their friendship thin.  A glorious and awkward tension between two communities with similar tastes but opposing methods plays out well in film. But in real life, in the world of games, things are a bit messier.

Last weekend, I came to Queens to celebrate indie games. I wanted to share a common place with the developers and 200 miles of pavement and a 45-minute daily train ride wasn’t going to stop me from honoring IndieCade’s first trip to the east coast. Hosted at the Museum of the Moving Image, IndieCade East brought over twenty games from its official 2012 indie game catalog and it accomplished what it set out to do: provide a haven to play, discuss, and debate videogames. It was a festival in every sense of the word because no barrier existed between speakers, developers, and gamers.

It’s hard not to notice the divergence between academics and indie designers.

I suspect half of the community at IndieCade is made up of academics: students and professors that believe in a formal way of teaching and creating games. The other half is made up of rogue developers that make games because they have a natural talent. After three days of playing and discussing games at IndieCade East, it’s hard not to notice the divergence between these two communities. Many of the indie games shown were made by developers with little or no education, yet the muscle behind IndieCade is a parade of degrees. So is a formal education necessary or not?

In his keynote address, professor, game historian, and game designer, John Sharp, compared the early days of game making, and the creation of Spacewar! to the punk rock scene. Both industries were born out of people who were unhappy with the status quo. At MIT, programmers weren’t comfortable with just letting cutting-edge technology sit in front of them without seeing how far they could take it.

But the rub was the cost. The technology was expensive and in contrast to today, it could only be found at universities. Hackers (a loose term that, in the early 60s, meant dedicated persons that stayed up all night tinkering with technology) took a brand new PDP-1 and “hacked” the first videogame: Spacewar!. In the 70s (or 60s depending on who you ask), punk rock was born out of a youthful angst and their need to sing about it. It was a movement, according to Sharp, that respected authenticity and abhorred age discrimination. Bands brought accessible, and sometimes free, music to any venue that would let them play music as long as minors were permissible at the door.

“How do you expect a punk rocker to afford NYU?”

Sharp’s goal was to challenge the indie game scene to take a cue from these two culturally-important movements. He wanted a diverse group of game developers to make personal games that weren’t bent on financial success. These games needed developers who were willing to see how far they could take the technology while keeping their emotional authenticity. It was a romantic notion but one brought back down to reality when a member of the audience asked, “How do you expect a punk rocker to afford NYU?”

It’s an honest question. In previous years, a career in game development might have meant a Bachelor’s Degree and $100,000 of debt. But for a fractured teenager bent on making indie games and its attendant distrust of big institutions and raw emotion, how does a formal education fit into Sharp’s recommendation? Four years and a new degree later, they’re faced with a potential mountain of debt which ultimate limits what you can create and how.

Perhaps no pair better exemplifies this ethos than Rami Ismail and Jan Willem Nijman of the Dutch game company Vlambeer. Ismail and Nijman met in college, (actually on the train to college where Nijman asked Ismail, at eight in the morning, to “Please shut the FUCK up”), and promptly dropped out to make games together. They believed experience was their best education. They were good at making games so why wouldn’t they? I met other developers at IndieCade East with similar stories. Rusty Moyher, the developer of Bloop, a frantic, finger-tapping iPad game, learned to code on the internet. Cipher Prime, the team behind Auditorium and Splice, boasts only one member with a formal computer science degree.

Does academia provide more problems than it does solutions? Anna Anthropy, an indie game designer, pushed the boundaries at Guildhall and was expelled yet she, more than anyone, reflects the authentic nature heralded by the indie community. Her punk rock brothers and sisters would be proud of her unabashed dialogue on sexuality and being a transgender woman in a largely white, male industry. In her book, Rise of the Videogame Zinesters, she encourages everyone to make games noting accessible software and laying out the basics of game design. She writes, “Make unusual creative decisions. You’re not beholden to anyone, so why be conventional?”

“Make unusual creative decisions. You’re not beholden to anyone, so why be conventional?”

Vlambeer’s Rami Ismail, now a teacher (earned out of experience and not education), was asked how he approaches teaching since he found school to be a hurdle towards his dream of making videogames. He replied that he gives projects with high stakes. He believes the best way to learn is to simply try. This practice is on par with other industries where equipment is cheaper and more accessible. The film, music, and design industries have all found free or low-cost ways to make and distribute their work proving humble beginnings don’t always start in the classroom.

But to be fair, there’s a reason the academic world annually turns out successful students. Education limits mistakes and time-wasting: two details that save a company, or an indie start-up, money. Experience can’t teach theory. School provides an intensive time to polish one’s skills and it’s probably the best place to meet people with the same dreams and aspirations as yourself. But sitting at IndieCade East, you couldn’t ignore the tension as academics in the crowd painfully admitted their system’s shortcomings or staunchly defended academics in the face of developers who admitted school just didn’t work for them.

I believe John Sharp’s dream of an industry that mirrors the early days at MIT and the punk rock scene will come true but I also believe it might not come from places the industry is expecting. Formal education proves too costly and and many students find their portfolio doesn’t match up with real-world experience. If the indie game industry is to reflect the values it wants: anti-establishment, free speech, and sticking it to the man, then it needs to be come from the people that aren’t shaped by establishments and told what to say. Whether that’s within the walls of the academy is still an open question.