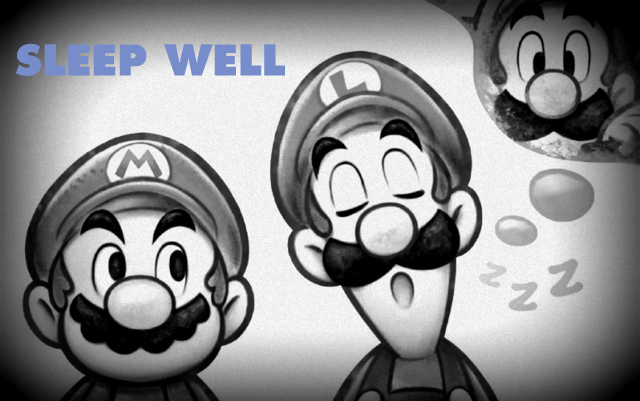 Boss Brickle looks to have died. He lies still, his square body knocked prone and horizontal from a devastating boot to the head. Sad, dramatic piano music starts to play. Those nearby, including the red-and-green clad Mario Bros., gather in a solemn circle of remembrance. Then the music stops. Brickle blinks and tilts his face up to address his grievers. Don’t worry, he explains. He was just resting his eyes.

In Mario and Luigi: Dream Team, a role-playing game by Nintendo and developer AlphaDream for the 3DS, we inhabit the role not of heros but audience members, helpless against the swift wit of our featured performers. The gags repeat throughout with enough variety to keep the player guessing. Each uses a role-playing trope as material to tweak, such as the item shop that welcomes you, with much fanfare, as the one-thousandth customer. In a genre where much of the action is automated anyway, Dream Team takes the reins and guides our hand while poking holes in expectations, setting up the player for one long, winding series of punchlines.

In a way, this is how dreams work; we can only wait to see what happens. To play Dream Team is to inhabit these in-between spaces, our acts colored by the absurd rhythms of dream logic. We push on, aware we’re only nominally in control, expectant for where the mind will take us next.

Dreams are a surprisingly apt metaphor for most videogames. We lurk just beyond the screen, pushing our vicarious heroes hither and thither. But the game is in control; we’re just holding the controller. Such an arrangement works better on a handheld, where the controller is the entire system. There’s less distance between the player and Dream Team’s inhabitants, filled with riffing comedians, naive ne’er-do-wells, and the occasional Russian bodybuilder obsessed with steak. If it feels as though we’re peeking in on a world in our hands, that’s because we are.

To play Dream Team is to inhabit these in-between spaces, our acts colored by the absurd rhythms of dream logic.

Dream Team doesn’t rely on breaking-the-fourth-wall conventions to tease its trespassers; rather than talking directly to the player, it’s merely hyper-aware of the audience’s existence. Another game this year that tried for consistent humor, Far Cry 3: Blood Dragon, fell flat for me, perhaps because of all that dead air between the TV screen and my couch. In both games moments are constructed for the player, but Blood Dragon laughs at itself and the player the way a bully chuckles while punching a weakling with his own fist. Dream Team’s laughter is hazier, the kind of dominoing giggles that build from nonsense: saying the same word over and over until it loses all meaning; late-night sputtering fits of mania for no good reason other than the realization, in those moments before dreams take us, that the world is stranger than we’ll ever know.

The main conceit of the fourth Mario and Luigi RPG, a series stretching back to the Game Boy Advance’s Superstar Saga, is that Mario can enter his brother’s dreams. Each time Luigi falls asleep (on a magical pillow, of course), Mario leaps into a hypnotic cloud of color. The real world is seen from an overhead view, with movement in full three dimensions. While “dreaming” in the game, however, our perspective literally changes. All levels played from within Luigi’s dreamscape are played as a two-dimensional platformer. The shift makes for a stark division that took this reviewer some time to adjust to, but makes a certain dream sense: the same way we don’t flap madly in a panic upon realizing that, yes, we are flying above the clouds.

The game wrings all the oddity and wishful thinking of the subconscious into these 2D levels. On the 3DS’s bottom-screen you see Luigi’s face, his eyes closed, breathing slowly with his mouth open. On the top-screen you control the brothers themselves. In certain moments a patch of the environment will glow to indicate that Dreamy Luigi (the game’s name for him, not mine) can actually merge with the object. Then, in a touch of delirious whimsey, you manipulate the sleeping Luigi on the bottom screen to affect the world within his mind on the top screen. Stretch his mustache and a tree branch stretches with it, snapping back into place like a slingshot; or watch as stars tumble from the sky, each turning into a separate Luigi and stacking on top of each other, forming a giant tower. On the bottom screen Luigi slowly raises his fist in triumph.

Of course, not all dreams are pleasant. In one area called Dream Depths, the deepest realm of Luigi’s subconscious, the world is a purple swirl with the brother’s thoughts rendered as floating text. “I’m not a coward,” drifts by. “Hey big bro,” goes another. Focus on the swirling background of doubts and regrets and you spy a contradiction to such casual chest-puffing: “Don’t leave me.”  As usual, Nintendo tucks some dark material beneath their cheery surface. Here, against their very will, we see a sibling’s inner-most thoughts, privy to the most intimate kernels of one’s self-worth. Even in dreams do the stubborn realities of who we are surface.

Even in dreams do the stubborn realities of who we are surface.

At one point the brothers chance upon a burbling fountain. Two characters, a set of bodybuilding beefcakes we are meant to follow, are just leaving, chatting to themselves about the strangeness that took place upon their sipping from this spring. Again the game knows more than us: We won’t get the gag until the follow-through. It’s up to you whether you drink from the fountain or not. Who could resist such temptation?

So you drink. The moment is pregnant with expectation: the same found on a live theater’s stage, where anything can happen; the same felt while lucid dreaming, when you know you’ll wake soon but unsure when. It’s an odd feeling, expectant and uncertain, but one that can’t, shouldn’t last forever. If only Mario and Luigi: Dream Team tweaked that other RPG tradition: a lengthy, exhausting quest. This is a long game, when it perhaps should not be. Too much sleep, after all, leaves you tired the next morning; jokes that take too long to set up are destined for an underwhelming payoff. Still, there is a perverse pleasure one can get from telling these and seeing an audience’s downtrodden expression at the end. They’re both disappointed and relieved. This is the same way we feel when we wake up, look around, and realize, after some nocturnal adventure, that it was all only a dream.