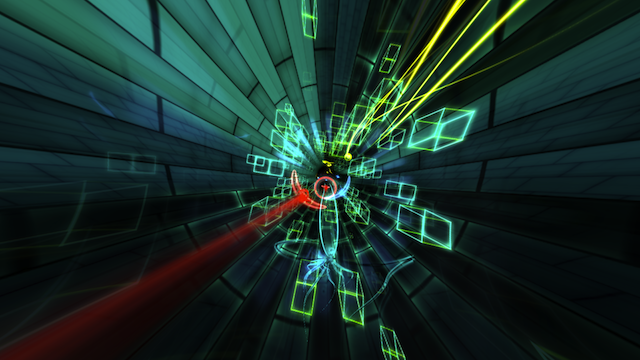 It was a crisp, clear day in March, and I was walking briskly to the Westin Hotel, trying to keep warm in the shadows of high buildings on 3rd, between Mission and Market. I had an arrangement to meet “a guy with a big beard and wearing a cowboy hat.” I knew little else. This bearded stranger was Shawn McGrath, the independent game designer who created Dyad for PlayStation 3. He didn’t have his hat on. Thankfully, Shawn is a relatable and down-to-earth guy, and we had no problem keeping a conversation going while we waited in the lobby for quite some time for Ryan, who was running late.

What Ryan and I saw in Shawn’s hotel room, a prerelease version of the wonderfully austere tube-racer Dyad, was beautiful. Perhaps I was caught up in the excitement of being in San Francisco, one of my favorite cities, but to say that we were in thrall of this thrilling, blustering, kaleidoscopic game is an understatement, as we attested in our writeup. Typically, I’m very wrapped up in the day-to-day dealings of games, so I don’t often have beautiful moments with the medium, but that was one to remember.

His argument was that its code was functional but also stylistic, which sure sounds like the rudiments of an artistic medium.

The other day, writing for Kotaku, Shawn spoke about another type of beauty, and one I hadn’t considered: the beauty of code. In it, he tackles the technical question, “What would ‘nice looking’—or ‘beautiful’, for that matter—actually mean when referring to source code?” It didn’t surprise me to hear Shawn entertain the question. Talking to us in on the 12th floor of the Westin, he had told us that he wanted to “paint in code,” to use programming language to create stunning graphics in real-time, and Dyad was testament to that.

Still, I found his treatise on the beauty of code perplexing. For one, the code he used to make his point belonged to Doom 3, a game about blowing the brains out of hideous aliens with shotguns, and a subpar game at that. It’s far from what I’d think of as beautiful. However, his argument was that its code was functional but also stylistic, which sure sounds like the rudiments of an artistic medium.

There could be an entirely another world of beauty hidden from us laymen.

This discrepancy illustrates the strange divide between the craft of making games and the act of playing them. Code is something of a proxy between the player and the developer. We players rarely get to see under the hood of a game engine, and even after going through Shawn’s article, I have no idea what any of his technical lingo means: lexical analysis, conts, NULL, backOnPlaceEdges, Split, STL, t_stencilShadow::R_ChopWinding(). Seriously?

While it’s true that artists and critics often approach their subject from two different points of view, I can’t think of an instance in which there has been such a chasm of know-how between the two sets. Usually, the craft involved is apparent, and what we see or hear is what we get. If I look closely at the “combines” of Robert Rauschenberg, I can pretty much visualize how he did it. A splash of paint here, a glued page there. I can’t play guitar, but I can listen to Stephen O’Malley play the guitar and feel like I know something about guitar, at least the beauty of guitar. But with games, there could be an entirely another world of beauty hidden from us laymen, and, well, we just have to take the word of people like Shawn McGrath for it. There’s a commune’s worth of creative coders out there. Maybe there is something to it. After all, art critic Susan Sontag’s account of beauty rings true for code:

However much art may seem to be a surface and reception by the senses, it has generally been accorded an honorary citizenship in the domain of ‘inner’ (as opposed to ‘outer’) beauty. Beauty, it seems, is immutable, at least when incarnated — fixed — in the form of art, because it is in art that beauty as an idea, an eternal idea, is best embodied. Beauty (should you choose to use the word that way) is deep, not superficial; hidden, sometimes rather than obvious; consoling, not troubling; indestructible, as in art, rather than ephemeral, as in nature. Beauty, the stipulatively uplifting kind, perdures.

Still, I get the feeling not even Sontag, who has rapped limpidly on the subjects of photography and resisting artistic interpretation, could make heads or tails of a ValType or HashComputer command.