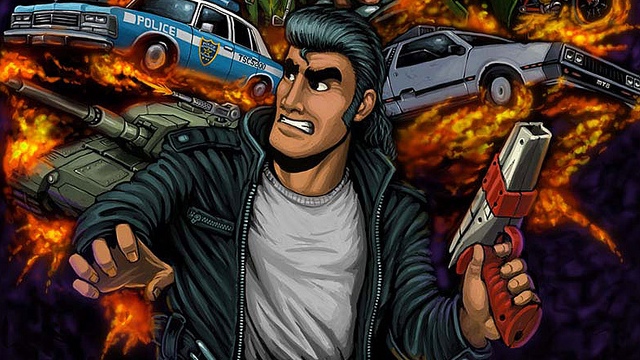 When we spoke to Brian Provinciano back in October 2011, he was nearing the end of work on his game Retro City Rampage, a parody of everything Eighties through the lens of a modern sandbox game like Grand Theft Auto (if that game came out for the NES). It was an ambitious project, especially for what was basically a one-man team; from idea conceit to completion, the game took over seven years.

After releasing last summer on Xbox Live Arcade, Playstation Network, and Steam, it’s finally coming to WiiWare, the downloadable games channel for Nintendo’s Wii, a service with scattered gems but unfulfilled potential. Its arrival on a Nintendo platform feels like a homecoming, as so much of Rampage stems from those days mashing buttons on the NES gamepad. To celebrate the release, the game will come with a separate mode, titled ROM City Rampage, essentially an accurate port of the title as if actually running on NES hardware.

Have we finally reached the point where retro has ceased to divide the old and new, where the label itself falls away and only the game remains?

The distinction between retro aesthetic and code running on classic hardware is thin, but important. So many games during the last half-decade or so of retro’s revival were outfitted with a purposeful style, both to cater to older nostalgic gamers but also as an excuse to streamline gameplay to a previous standard. But certain design decisions or graphical embellishes couldn’t actually be done given that era’s limitations.

ROM City Rampage asks us to play not a modern game with a retrofitted skin but rather an archaic game built in the future: Had Provinciano rode his beloved Delorean back to 1985, this exact game could have existed, if not in form but in function.

Have we finally reached the point where retro has ceased to divide the old and new?

The option portends a significant moment. How long will “retro” signify a radical departure from modern sensibilities, able to tug on memories forged long ago? The influx of new titles made old (Super Meat Boy, the BIT.TRIP series, Hotline Miami, To the Moon, etc.) and old titles made new (Mega Man 9 and 10, Bionic Commando Rearmed, Blaster Master Overdrive, Sonic the Hedgehog 4, etc.) is conflating our past and present experience. An 11-year-old playing Sonic 4 will be reminded in the future of 2012 when playing a game based on mechanics from 1992. A 31-year-old playing Retro City Rampage is reminded of 1989 in 2013. It’s all a bit confusing.

And with that confusion comes a flattening of the term “retro” into obsolescence. Woe to the designer who builds their modern game with an intention to take us backwards. Soon any era’s aesthetic will have been folded into our own so many times, through homage and pastiche, that then will become now, with no distinction between the two.

The homebrew community has known this for some time. Brand-new games built on “dead” systems are made every year. Their purpose even goes beyond mere play: Ian Bogust programmed Atari 2600 code into “game poems.” NES games can serve as an interactive resume, as they did for John Carmack and John Romero of then fledgling id Software. Even the Virtual Boy has a thriving development scene.

Sometimes a new game built on old hardware even releases in the contemporary marketplace properly: Rush Rush Rally Racing launched as a WiiWare game in 2012 after years as an unreleased Dreamcast title.

Here’s hoping the term “retro” falls away as a catch-all for something that means less and less every day. Let each game stand on its own, create its own identity, connect with players regardless of in-joke or head-nod. Maybe then a specific hardware will be chosen for its forced limitations and the creativity that spurs, and not to ignite its old player’s fading memories.