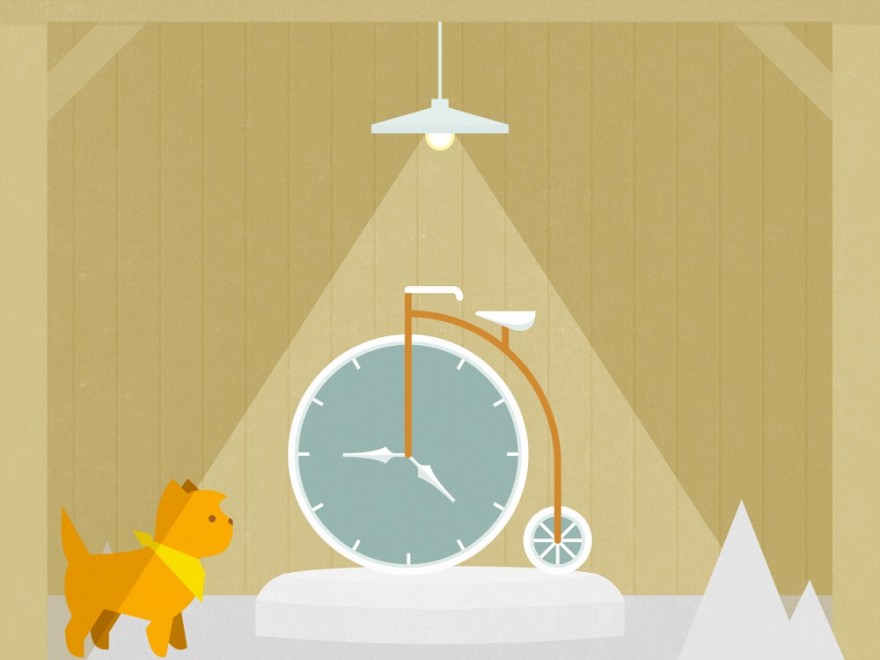 Doggins is an artistic family composition: David Condolora brings in his talent as associate editor at Pixar; Brooke Condolora supplies the brush strokes as a full-time illustrator; and pet canine Oliver Doggins is the wet-nosed muse, and adorable centerpiece. The result is a world-saving trip to the moon, then briefly to the past, and back.

With as much explanation as a dream offers—none—Doggins begins with the titular pooch catching Z’s in his basket, when his compact rectilinear house suddenly performs the extraordinary feat of rocket propulsion.

The consequent lunar landing has all of the clay-smashed grace of the iconic rocket-gouged eye of Méliès’ Man in the Moon; an image that matches the surreal nature of Doggins so much that I mistakenly recalled it as being visually referenced.

the geometric minimalism of Doggins subsides, if only slightly, to the bold colors and boisterous curves of Futurist sci-fi.

Guided by dream logic, Doggins adopts a nonchalant approach throughout, including when he learns of the humanity-destroying plans of Fitzwilliam, the nefarious, monocle-adorned squirrel. Fitzwilliam’s plan is fitting of a Bond villain: Use his pennyfarthing time machine to erase seminal inventions from human history. Naturally, Fitzwilliam’s cartoon charm invites a game of cat and mouse with Doggins. When the two first meet, Fitzwilliam takes the opportunity to hand over a teasing “un-invitation” to his big reveal party; a knowing “just try to stop me” gesture.

After Doggins steps out onto the moon without breathing apparatus, it’s safe to assume that we’re in the land of nod. To ensure that this is clear, it’s here that the geometric minimalism of Doggins subsides, if only slightly, to the bold colors and boisterous curves of Futurist sci-fi.

Fitzwilliam and his legion of squirrels are curvaceous grey plumage with a belly and toothed-head attached. Trees are green spheres upon white trunks. Half-domed mini-moon roofs poke out from the ground emitting opera music from Fitzwilliam’s elitist party. A creature known as The Giant Crat, which acts as a bouncer for Fitzwilliam, is a rounded oblong.

The characterful minimalism of Doggins distinguishes the game, but it also helps maintain a refreshing simplicity in its puzzles. The inventory-based solutions are definitely absurd: A makeshift toilet paper bowtie, and a “gumstache” (chewing gum and moustache combo). But, unlike the annoyance of so many adventure games, the items are kept few and their purpose made obvious. Another success can be found in the tangibility of pulling at the cap of a mushroom, and unsticking a moon boot from the gum upon its sole.

Doggins is defined by its minimalist design, which extends to its length. But for its brevity, you get a dose of cartoon capers, with idiosyncratic puzzles providing the stops. Following the golden rule of TV serials, Doggins ends just as it began, the status quo restored. Perhaps Doggins will have another short and sweet dream soon.

You can purchase Doggins for iPad on the App Store for $3.99.