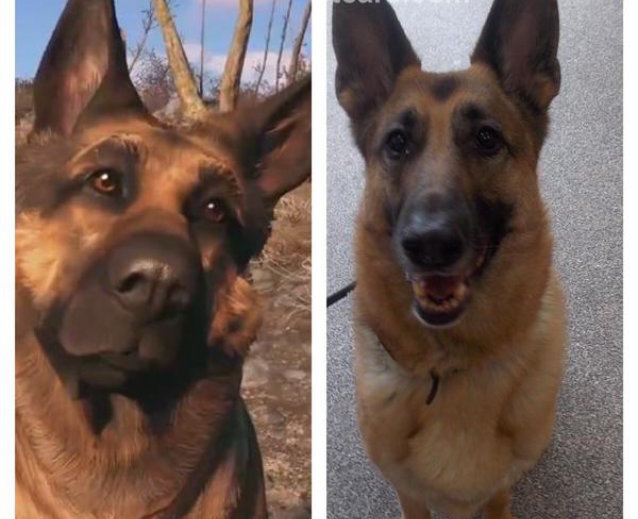 Making a videogame is hard. Like, tear-all-your-hair-out-and-crawl-into-fetal-position hard. Which is why it’s always reassuring to see the members of a studio, especially a big one with lots of pressure bearing down on it like Bethesda, smiling and enjoying themselves months before their next major release. Usually, you can bet that behind the stress-free smiles of a game developer is some sort of pet lapping up their tears. But with the lovable companion pooch that’s been the star of most of Fallout 4′s trailers so far, the love of a game designer for his/her dog has been immortalized in the game itself.

Meet River: the real world inspiration for Dogmeat in Fallout 4, who also happens to be the real world companion of lead level designer Joel Burgess and former Bethesda marketing manager Michelle Burgess. Last month, some behind the scenes footage showed the studio working like dogs to capture River’s spirit and bring it to the Fallout universe. Aside from Joel and River “doing frisbee wrong,” the video also shows River believing she is people at a reception desk. While IRL River isn’t prone to eating throats, Dogmeat sure is, and another video revealed how she will work as one of the potential companions in the upcoming game.

Dogmeat hanging with the team, checking out some Battlefront. pic.twitter.com/E0PDm7A7RT

Recently, River also stopped by the Bethesda offices, spreading joy and sporting the most fashionable bandana ever worn by a four-legged creature. River knows how to hang really hard, too, as seen below in the pictures demonstrating her exhaustion from having spread joy and supported her humans at work.

She is a little worn out after a day at the office with all her friends. #dogmeat #Fallout4 #myRiver pic.twitter.com/lSTM4ore0u

Just as Dogmeat comforts the IRL humans creating this post-apocalyptic world, dog companions have also been comforting the sole survivors of many a post-apocalyptic fictions. A trope begun by the original Mad Max trilogy as well as 1975’s A Boy and His Dog, modern iterations of the post-apocalyptic dog companion can be found in the only worthwhile moments from films like I am Legend.

“so proud. Tears in my eyes proud.”

In the Fallout universe, Dogmeat (or at least a different iteration of him) made appearances all the way back in the original game and, then, as a descendent of the original in Fallout 2 and Fallout 3. There’s no word yet on whether or not Dogmeat in Fallout 4 has any relation to the original hound, but who cares because unlike the original, this Dogmeat is basically immortal when he is your companion. Which, for anyone still traumatized by the events at the Mariposa Military Base, is great news.

River’s parents couldn’t be happier that their pup will be helping to bring joy to thousands of players soon enough. In a tweet, Michelle says she is “so proud. Tears in my eyes proud. I’m excited for everyone to get to see and hear her in just a few short months.” Perhaps the only thing that could’ve been more perfect for the Burgesses would be having their other dog, a corgi, show up in the desert wasteland. But, not known for their altheticism, perhaps its best the corgi stay at home this time.

Fallout 4 releases on November 10th for PC, Playstation 4, and Xbox One.