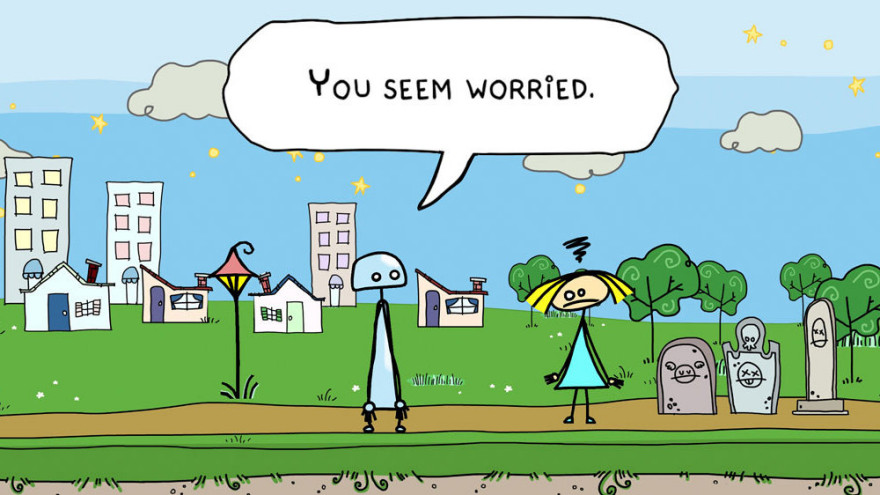 I’m not sure who Doki-Doki Universe is for.

Is it for kids? It definitely feels that way. It’s a storybook about a robot that needs to discover what humanity is all about or else his model will be scrapped indefinitely. He is Pinocchio or Lieutenant Commander Data. The game looks like a storybook, too: Clear outlines and eye-searing Crayola that sometimes slips out of them. It’s goofy, and a bit mad-cap. You fly to other planets via a whale with wings. One planet is entirely made of trash with piles of cartoon poo walking around. On another the anthropomorphic sushi realize they’re food and hide to avoid being eaten. It’s that type of game.

Sometimes summoning backfires and a boombox appears instead of a chicken.

As QT3 you land on planets, each themed, and, through them, learn an important lesson about humanity. QT3 can walk around the 2D planet, chat, fling and toss the environment and people, and generally be a bit of a jerk, if you want him to be. Talking to people usually has them offering you quests, usually involving summoning a type of item. You find these items scattered around planets, behind the scenery or given by people when they like (or hate) you enough. Here’s another gauge of the game’s sense of humour: I arbitrarily spawned a doctor next to a meditating monk and he chased her around the planet asking for wisdom. Sometimes summoning backfires and a boombox appears instead of a chicken and while the loss of control should be annoying watching the other characters react turns that around. A lot of work has been put in to make each character have a distinct set of likes and dislikes, which leads them to react in ways I didn’t expect. The effect of all this deliberate work is the appearance of the care-free Saturday morning cartoon chaos.

But maybe it’s secretly for adults? There are quizzes scattered around the solar system. “Who are you in this picture?” it asks of an exaggerated boxer fighting a robot. I don’t know, the robot? Doki-Doki Universe then gives me a detailed explanation why picking the robot signifies a willingness to never give up. Who are these quizzes for? They seem like parodies of the quizzes and personality tests that used to litter Livejournal and MySpace. What Buffy the Vampire Slayer character are you? But whereas those were easy to game, Doki-Doki Universe’s quizzes are too unpredictable and zany. Do enough and a psychiatrist gives you a profile of who you are. The bigger question, the one I keep coming back to with this game is: who is this for? Are kids really that interested in self-discovery? Aren’t they still … discovering that?

On another the anthropomorphic sushi realize they’re food and hide to avoid being eaten. It’s that type of game.

Doki-Doki Universe also has a levelling system. Doing more things for characters nets more experience. More experience leads to more levels which leads to more stuff to decorate QT3’s home planet. But this sort of system encourages the player to play a bit too safe, a bit too much like a goal-oriented adult (I’m not sure if I’m a goal-oriented person, since one quiz said I was and another said I wasn’t). I laughed the most when characters wanted something vague and I kept summoning the wrong thing. Some of the stuff is less funny, like Afri, the planet that’s all straw huts, lions, and the home of most to the people of colour in the game. In a game that’s as colourful and imaginative as Doki-Doki Universe, this comes across as lazy and tired.

Doki-Doki Universe wants to be a Pixar film. You know: artful, sentimental, tapping into a core of childlike earnestness that was buried beneath years of front-page tragedies and daily grind. But it wants to play it safe; it avoids getting too weird and abstract, as Noby Noby Boy, another storybook toy-game, did. No, Doki-Doki Universe is a Dreamworks film. It teeters between juvenilia for the kids and knowing winks for the adults, never committing to, or satisfying, either.