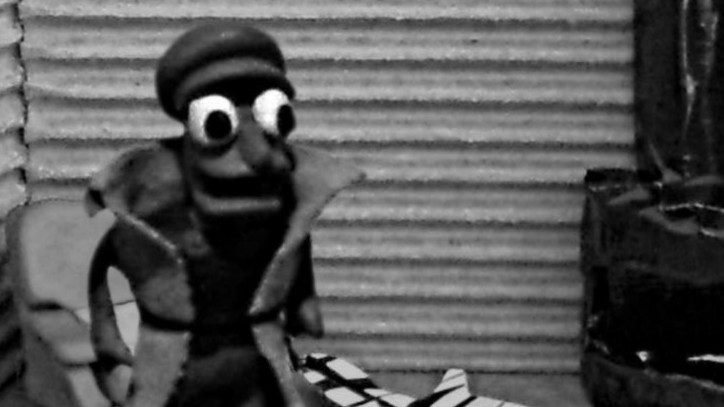 Dominique Pamplemousse grabs your attention: it stars a struggling private detective and a cast of characters with a penchant for low-key, circuitous conversation punctuated by explosions of off-key song. Ostensibly an adventure game, it uses this narrative as a vehicle to deliver commentary on social issues, most notably the economy and gender identity. It is certainly a valiant mission for the game to attempt to make good on these varied fronts, but it’s often said that the road to hell is paved with good intentions, and Dominique Pamplemousse’s quest for social justice ultimately ends up being nothing more than a clumsy amalgam of half-realized ideas.

At the start of several scenes throughout the game, Dominique will be asked “Are you a boy? Or a girl?” in various ways, always awkwardly and without any seeming provocation. Many of the characters within the game are oddly obsessed with Dominique’s ambiguous gender identity. This is made clear by these sort of intrusive questions, arguments over whether or not to address Dominique as “Miss” or “Mister,” complaints about how it’s “hard to tell these days” whether one is male or female, and by Dominique herself randomly venting about the confusion bred by gender-specific bathroom signs.

Gender never plays a meaningful role even in Dominique’s characterization.

It’s important to mention that all of this shows up in a story about a private detective looking for a pop star gone missing, a story in which personal struggles with gender identity don’t appear organically. Gender never plays a meaningful role even in Dominique’s characterization, resulting in painful bouts of telling rather than showing that attempt to force their way into the story with all the subtlety and nuance of a bulldozer through a brick wall. Unlike Gone Home, where Sam Greenbriar’s exploration of sexual identity is seamlessly and meticulously woven into the game’s narrative, Dominique’s struggle with gender identity is jagged and forced, trying to be bold and innovative but instead feeling out of place.

Similarly, money is tight for Dominique, and I know this because the game told me so with a frequency that seemed intended to inspire a drinking game. It’s first seen in the beginning, when Dominique complains that it’s been a while since the last case brought money in, later laments living in a run-down apartment when visiting a pop star’s mansion, and admits resorting to stealing internet from the neighbors on an outdated laptop. While one initially feels some sympathy for Dominique, the constant barrage of complaints throughout the game transforms them—as complaints tend to become—annoying. It’s not enough to merely have the main character constantly express their financial woes at every turn and expect that to serve as the game’s broad subtext about the economy. During one conversation, a character essentially tells Dominique that “It’s tough out there for everyone,” but we never get a real sense of how tough or in what way economic struggles have hurt any of the people outside of our main character.

What, then, are we meant to feel about Dominique’s struggles? Is this a small lesson in empathy, or is the game trying to bring real-world issues to light within the confines of its narrative? Never is this clearly defined or well-executed, leaving us with yet another idea that fails to grow into anything significant.

The real misfortune in these shortcomings is a missed opportunity. It’s undeniable that gender and the economy are very real and important issues so many face, and implementing them in this uniquely interactive medium while allowing players to feel a sort of empathy for a character who struggles with both of these is a wonderful way to inspire conversation.  Dominique Pamplemousse, however, leaves the player with themes that jut out awkwardly from the story—a set of half-realized ideas that never hit the high notes they’re reaching for. That might be the point, but it makes for a pretty bad musical.