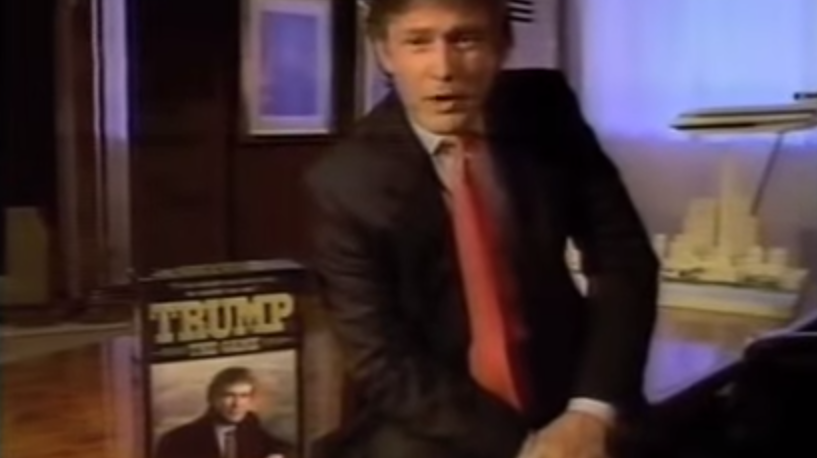 In 1989, four corporate bankruptcy filings and, one suspects, many more hairpieces ago, Donald Trump released a board game. It was called Trump: The Game. Of course it was called Trump. The big man himself predicted that Trump: The Game would sell two million units. It did not. Not even close. But fear not, the fine human specimens at The Daily Beast have rescued its TV advertisement from the dustbin of history and it’s quite a doozy:

The structure of the 26-year-old ad is basically the same as Trump’s current campaign. Lots of people—people on stock trading floors, people in limos, people who turn out to be the dearly departed Phil Hartman—talk about Trump’s new game. “Trump has a new game, what is it,” asks a newsreader. This question isn’t answered. There are no specifics. The point is that Trump is doing something, and that’s the story. In a similar vein, Trump was asked on Thursday how he could afford to build a wall along America’s border with Mexico. His answer: “We’re going to look into that, and the answer’s going to be yes.” The specifics will come later—later, as in after you’ve purchased the product. Which is to say that the ad leaves unanswered the fundamental question of how Trump: The Game actually works.

Trump: The Game is basically Monopoly. “Imagine the classic game put through Google’s Deep Dream and infused with the sort of egomania that only Trump can sustain,” writes The Daily Beast’s James Joiner. This is at least true on a superficial level. Players are given money and take turns going around a board buying and developing properties. The big visual difference is that everything in Trump: The Game is named after The Donald himself. Thus, as with much of what Donald Trump does, the value proposition has much more to do with branding than meaningful innovation.

The Trump-as-Monopoly description is not, however, entirely fair. Although Monopoly has always been a capitalist fantasy, Trump: The Game took this fantasy to new levels. Trump is a game about speculation as opposed to the mere accumulation of wealth.  Gameplay, going by the explanation on BoardGame Geek, is divided into two rounds. In the first, the players bid on the eight available properties on the board without knowing their actual values. Once all the properties have been acquired, properties are bought and sold amongst the players. At the end of the game, the property’s true values are revealed and the player who has made the most money wins. (An updated version of the game was later released to cash in on the popularity of The Apprentice. Its mechanics were subtly different but the main ideas underpinning the game remained the same.)

Trump: The Game, as an evolved form of Monopoly, is a reasonably accurate representation of the developer-cum-Presidential candidate’s trajectory. You start with a load of money, more than the layperson could ever imagine. You plunk that money down on properties, and possibly make even more money than a layperson could ever imagine. Should you lose all your money, you can close the box and start again. To the players, it’s only a game. That narrative arc may read like a repudiation of capitalism, but Donald Trump’s persona has always been satire without a punch line. He’s Daddy Warbucks in a movie that has yet to officially cast him as a villain.

Trump’s Daddy Warbucks in a movie that has yet to officially cast him as a villain.

This sort of discordance, which is at the heart of Trump’s popularity, is also present in the history of Monopoly. Lizzy Magie patented the earliest version of the board game in 1903 and called it The Landlord’s Game. “She wanted her board game to reflect her progressive political views,” writes Mary Pilon, whose book The Monopolists chronicles the game’s underappreciated history of the game. “That was the whole point of it.” Magie was inspired by the political economist Henry George, a fierce advocate for the heavy taxation of rich landowners. (“How many men are there who fairly earn a million dollars,” George once asked. Just imagine Trump’s answer.) Hasbro, which purchased the rights to Monopoly, wrote Magie out of its official history, but its internal tensions lived on. As Christopher Ketcham noted in his excellent Harper’s essay on the economic logic of Monopoly:

“The initial phase of competition in Monopoly, the free-trade phase that happens to be the most exciting part of the game to watch, is really about ending free trade and nixing competition in order to replace it with rent-seeking.”

Board games simplify all sorts of concept in order to produce pleasant game mechanics. Clue isn’t an actual murder investigation. This relative simplicity does not, however, preclude the existence of contradictions within such games. Monopoly is an ode to rapacious capitalism and a criticism of the accumulation of wealth in the hands of a few. Likewise Trump: The Game can be read as a demonstration of its namesake’s genius or proof of his fundamental absurdity. These contradictions produce compelling games; the same may not hold true when their muddled worldview manifests itself as political theatre.