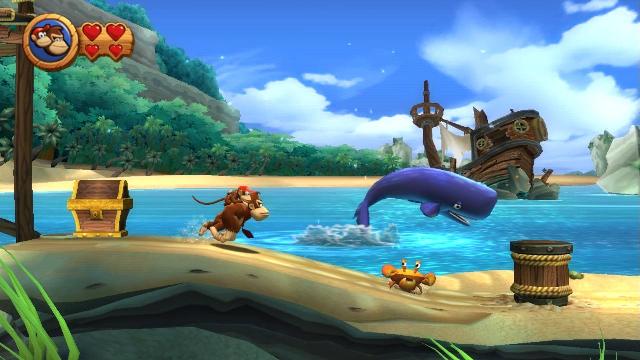 Nintendo has just announced that the truly excellent (and almost ridiculously hardcore) Donkey Kong Country Returns will have a new lease on life, in the form of a 3DS version, due out this summer.

It will be in 3D, on a tiny screen, but unless Retro seriously messes with the title, this will also be the definitive version – mostly because it won’t require a Wii-mote to play it on.

Let’s talk about controls for a moment.

I am the furthest thing from a Wii-hater (or even a motion control hater). I loved all the goofy Wii Sports nonsense, and I even thoroughly enjoyed the Metroid Prime and Pikmin titles in their Wii-mote enabled states. Let’s Tap and Boom Blox are all-time favorite party games of mine, and yes, I still totally throw Dance Central parties in my cramped living room (I’m a platform agnostic motion gamer).

However, I think we can all agree that some games are better suited to motion controls than others. DKC Returns made use of the Wii-mote for small gestures – the “ground pound”, for example. Like many games that would have been better suited to a more traditional control scheme, it suffered latency and weird detection hiccups that caused so very, very many untimely simian deaths.

There’s something particularly disappointing about great games that are hampered by generally daft or ill-fitting control systems. Poorly made games with motion controls are everywhere, and no one expects greatness out of them. But when an impeccably well-designed experience suffers unnecessarily (2D platformer control schemes have been something of a solved problem for a long time now), the player (and quite possibly the development studio) can’t help but feel betrayed in some way.

The otherwise fantastic Zelda: Twilight Princess presented me with similar issues. Over and over, I would die, screaming at the TV “I clearly threw that bomb!” and the like, eventually believing that the game’s broken (for me) controls were a Zen-like exercise in mastering patience and learning that the game was in control, not I. I would’ve given a year’s worth of the very best Wii releases for the ability to play with a functional traditional control scheme.

I suppose my only real hope is that Nintendo makes a 3DS version someday. I’ll try not to hold my breath.