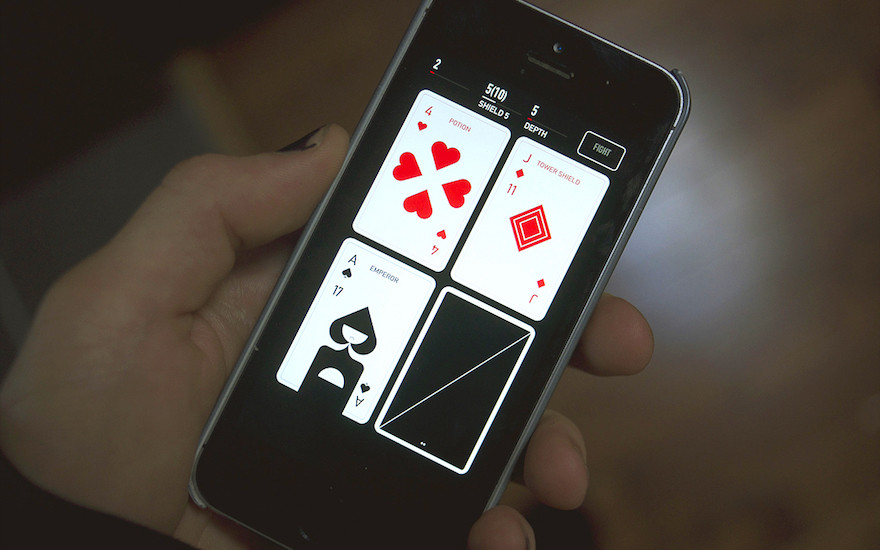 Train Jam is an annual game jam (for the last two years, at least) that runs on a cross-country train from Chicago to San Francisco. The California Zephyr brings a group of diligently game-making developers on a fifty-two hour trip to the west coast for the Game Developers Conference, which this year ran from March 2 to 6. This year the group of train jammers made 43 different games, one of which is a new work from John Eternal and Aliceffekt (Devine Lu Linvega, aka David Mondou-Labbe) called Donsol.

While Donsol’s focus is visual and interactive, rather than auditory, both developers are musicians. The prolific and somewhat esoteric Linvega’s past mobile work includes the game Oquonie, as well as several mobile alphabet-learning tools, and time-telling apps. Donsol is something of a departure from the mobile work on his website, being relatively easy to understand: it’s a solitaire-style card game with the thematic overlay of a roguelike dungeon-crawler.

mandala-like sets of symbols on the cards

The game works with a deck of 52 cards (and two jokers)—the player walks into the first room of the dungeon, flipping over four cards. Black cards are monsters, which deal damage; diamonds are shields, which reduce damage taken; and hearts are potions, which help heal the player back up to 21 health. The two jokers are high-powered boss monsters.

While it could be played with a normal deck of cards (and maybe a cribbage board to keep track of your health) Donsol is also on iOS devices, with a minimalist three-color design focused on mandala-like sets of symbols on the cards. Honestly, if the creating pair put out a physical version of Donsol, I’d jump for it—the cards are readable and attractive.

Players try to get through the whole deck of cards and come out the other side alive, but it’s easier said than done. I have yet to make it all the way through the dungeon—I once made it to the 19th room, but drew two boss monsters at once and got wrecked. A few of the mechanics are initially obscure (aces are labeled as 1, and do 17 damage, which has tripped me up more than once), but an update has since changes that, and added high scores, monster names, and all sorts of good stuff.

There’s a limited number of games to be made with a deck of cards, though, as it turns out. Donsol’s About page is careful to note that it was “designed on a train, without internet connection,” but that the “gameplay accidentally ended up being a twist to Zach Gage and Kurt Bieg’s Scoundrel, designed in 2011.” They also point out another 52-card dungeon game called Card Crawl, which came out last week. Try one of them, try all three; it’s up to you, dear dungeon card crawler.

Donsol is available to purchase for $0.99 on iOS.