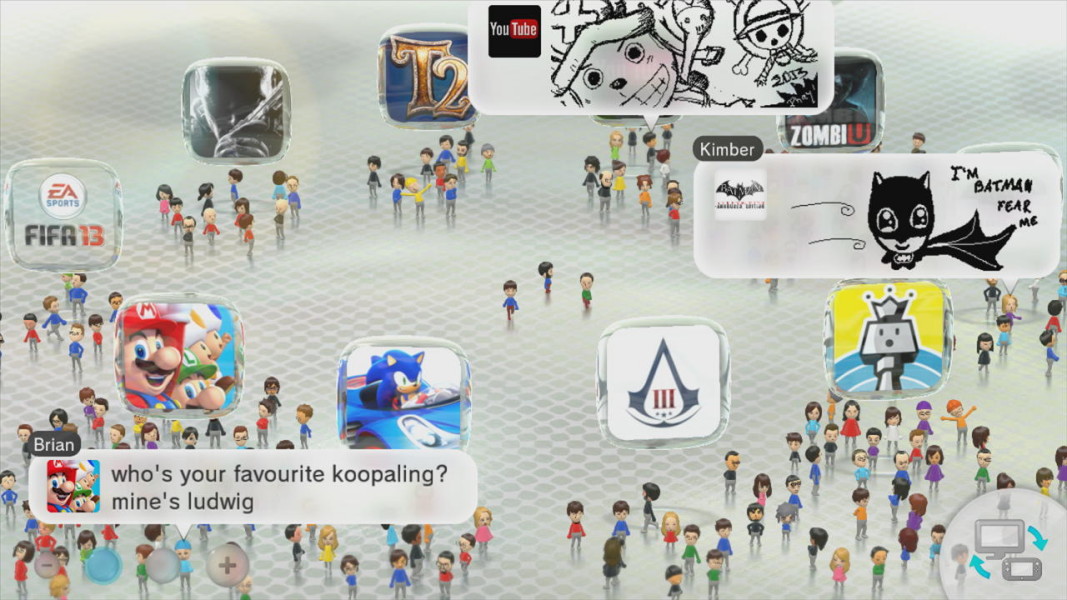 It doesn’t take long to acclimate to the Wii U’s giant, tablet-style controller. After a few minutes playing The Legend of Zelda: The Wind Waker HD, I felt I had a good grasp on what to expect from Nintendo’s latest console. Soon enough, I came across a sparkling glass bottle on a beach on the game’s opening island. I picked it up and it popped a message up at me:

“i want link between worlds on wii u”

Here was someone disappointed that the latest portable Zelda game for 3DS wasn’t available on their Wii U. Less than a half hour after turning on my new Nintendo console and I’d already had an online interaction with someone. This was inconceivable to me during all those years playing the GameCube, Wii, and DS, which seemed terrified of facing the internet head-on. I went on the internet during those years anyway, and I don’t totally blame Nintendo for avoiding the whole thing.

So it goes that the oversized controller is not the most surprising and exciting feature of the Wii U. Instead, I find myself perpetually amazed at the online functionalities that Nintendo baked into the system, both for their intended uses and for the many unintended consequences. These surface most gracefully and strangely in the Miiverse, a kind of social network for the whole system that’s also elegantly woven into the fabric of some of the system’s games.

At its core, it is very, very silly. But it’s also singular and creative in a way that distances it from the online services offered by Sony and Microsoft. PlayStation Network and Xbox Live developed social features, like sharing, only after focusing on competition through competitive online play or tracking and comparing game achievements. Miiverse is first and foremost about communication. This may be the company’s first foray into a full suite of online features, but they’ve figured out a way to make the whole experience feel distinctly Nintendo.

At its core, it is very, very silly. But it’s also singular and creative.

Miiverse most resembles a bunch of message boards for all kinds of Nintendo topics: games, franchises, eons (like the community dedicated to the Year of Luigi). Users can friend each other, respond to posts, and, in a move analogous to “liking” something on Facebook, simply click the “Yeah!” button if they enjoyed something. Thanks to the touch screen on the Wii U controller (and the 3DS), they can type, hand-write, or draw just about anything they like. (Miiverse employs both software and human moderators that cull inappropriate content.)

This already makes for an odd equation. Internet videogame communities aren’t famous for being hospitable. Consider developer Riot Games, who hired behavioral specialists to study the much-maligned League of Legends community (first Google search suggestions for “league of legends community”: “sucks,” “is bad,” “is toxic,” “is awful”). Think of the prevalence of hate speech on online gaming services.

Miiverse feels different. I think this is partly a demographic issue. The kinds of players who want to share their Luigi drawings on the Super Mario 3D World board likely have a different temperament than those who want to get all of the multiplayer achievements in Call of Duty. Though this is conjecture, Nintendo’s family-friendly games seem to attract a younger audience generally while retaining a dedicated base of older players who’ve been following them for decades. It’s an unusual mix.

Of course, no online community can be totally safe from vulgar trolling or belligerence, but Miiverse’s moderation team aims to ensure that the content on display can’t much resemble a typical gaming forum or virulent Xbox Live team chat. Knowing this, Nintendo uses the touch screen and social network in combination to encourage creativity. Miiverse users have embraced it in all sorts of ridiculous, goofy, and impressive ways. Clumsy sketches of Nintendo mascots mingle with complaints about homework and genuinely excellent fan art. Players take screenshots and seek advice on game completion. Users address Nintendo developers like Masahiro Sakurai by name, asking for outrageous features or personal favors. Everything is greeted with a “Yeah!” and a big smile.

Miiverse excels, though, with those games that Nintendo developed with Miiverse-specific functionality, such as Super Mario 3D World and Wind Waker HD. There are no achievements or trophies, and most games do not feature direct online competition, which fosters the playful social environment. Instead of competition, Nintendo uses Miiverse in their games to encourage sharing and connecting in off-kilter ways.

Mario 3D World and Wind Waker HD both feature randomized sharing. In Mario 3D World, a player can leave messages on the world map and at the end of levels. These are dispersed at random to other players, filling their screens with crowds of chatty Mii characters. Similarly, Wind Waker HD allows players to place messages in a bottle and cast them out to sea, which is how I received my first message. These will wash up on the shore or drift on the ocean of some other player’s game. You can respond, pass them on further, or just go on your way.

People share all sorts of things, which keeps the discovery of a new message interesting even after dozens of hours. A message in a bottle in Wind Waker HD might contain a photograph of a gorgeous sunset at sea or a surprising interaction between the game’s villagers. Players often share the progress they’re making by snapping a photo of a new dungeon or boss. A bottle could just as easily contain a selfie of a grumpy Link captioned with “school sux.” You never know, and that’s the whole point.

This results in a kind of ambient social environment. It begins to feel like you’re playing a single-player game with tons of other people at once, sort of similar to a game like Dark Souls. The greatest difference is that Dark Souls, in order to maintain its atmosphere, restricts players to short, cryptic messages. Nintendo is less concerned with maintaining the fiction of the Mario universe and places few restrictions other than barring inappropriate content.

It’s easy to point out all of the ludicrous things these features enable, and the Twitter feed @BadMiiversePost offers a curated list of things both hilarious and offensive (often, content that Miiverse moderators haven’t removed yet). At some point I had to stop counting each Mario 3D World post I saw that featured one of the game’s pre-made character portraits placed in a pose that made them appear to be farting.

The kinds of players who want to share their Luigi drawings on the Super Mario 3D World board have a different temperament.

Underneath all of this, though, is the sense that Nintendo has finally figured out a way to make the internet work for them. Their games lend themselves to these personalized interactions. They’re strange and silly and friendly and colorful, and their best games still evoke wonder in younger, newer players as well as adults. Now, there’s a way for players to broadcast their affection for the ridiculous experience of watching Mario transform into a cat in Mario 3D World, or to discuss their bittersweet relationship with shopkeeper Funky Kong from Donkey Kong Country: Tropical Freeze.

These are the things that make Nintendo games exciting, and with Miiverse, these games feel more alive and collaborative than ever. Players can immediately share their latest discovery with tons of others. It makes sense that connecting players online through games that inspire sincere affection and joy has led to an environment where people feel comfortable sharing their ideas and reactions without vitriol.

My friends and I still get together to play games together in person. But at some point over the past few years, we developed an understanding that we’d turn off or ignore the online component of most games while we were playing. Maybe the whole experience had just become a little too overwhelming for us while we were looking to hang out and enjoy a game without any pressure. Miiverse’s charming, welcoming interactions invite a different response and a renewed interest in connecting with others. Each friend that plays the Wii U for the first time soon says the same thing:

“Hold on a minute. How do I post something?”