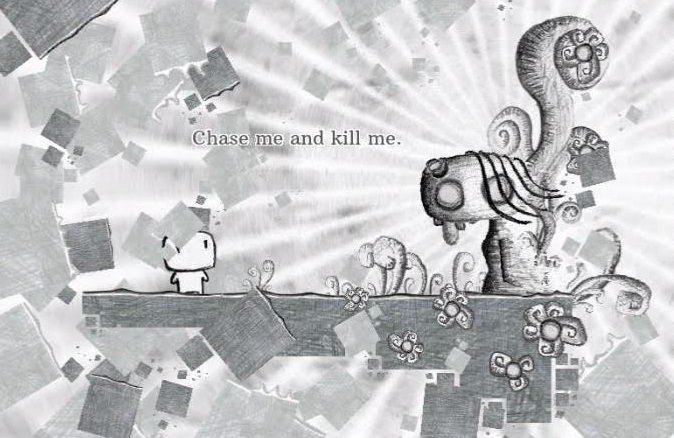 Call him Wuthrer, call him Wuthrer Cuany—call him any name you like. Just don’t call him conventional or compromising. The Swiss artist’s latest project, Don’t Kill Her, is an ostensibly two-dimensional adventure game drawn entirely in pencil. The title is up for vote on Steam Greenlight and is currently seeking funds on Indiegogo.

Driven by a central murder mystery in which the player character is said to be the killer, an unnamed victim narrates the dreamlike story as you make your way through Wuthrer’s sketchbook-esque world. While the artist is coy on specifics (“Don’t judge a game by its cover,” his website urges), there’s plenty to admire on the surface.

Aside from audio production—Siddhartha Barnhoorn’s music, Julien Matthey’s sound design, and Lara Ausensi’s voiceover narration—the game has been a fairly solitary endeavor. “All of the visuals used for Don’t Kill Her are the result of my sole relentlessness to fill a plethora of sheets of paper,” says Wuthrer, though “a few animations were created with the help of a well-known animation software that allows you to effortlessly add special effects or basic movement.”

“The animation of the ostrich with a tie, for example, is for the most part hand-drawn,” he explains. (See above.) “On the other hand, the balloon bobbing up and down is interpolated with Flash to avoid having to draw each frame of its movement. The combination of both techniques, namely traditional and computer-assisted animation, allows for this unique rendering—admittedly always vibrant, yet not without a certain softness in some parts.”

There are both practical and aesthetic advantages to this approach according to Wuthrer. The hybridized process “helps save a significant amount of time, which is more than welcome, as Don’t Kill Her is mostly a solo project.” The second advantage is far less pragmatic: “I really love imagining my creatures and characters in their entirety. To bring them to life, I cut them up in little pieces that I draw separately. I therefore find myself digitizing them and cutting out [individual parts of the sprites’ anatomy] one after the other before reassembling them within the animation software.”

Wuthrer confesses to taking great delight in his role as a kind of mad scientist. “The vital power that digital creativity holds really strikes me,” he says. “Images become animated and can even possess a will of their own with the help of artificial intelligence [and electronics] created with seemingly lifeless concrete materials.” And with Don’t Kill Her, he believes that he exacerbates this paradox, “drawing dismembered monsters on lifeless and innocuous sheets of paper in order to bring them to life with a machine.”

Born of a lengthy learning process marked by trail and error, Wuthrer credits much of his mixed-media technique to an academic background outside of game design. “I initially studied psychology,” he says, adding that he later moved on to a school of art and communication. “I’ve been able to effortlessly detach myself from traditional techniques and resources of game development. Hence the game’s distinctive appearance.”

Outside of games, Wuthrer’s artistic influences are many. “I have the awful habit of systematically trying to escape any form of stereotype,” he admits. “I’m part of a collective of artists, I practice Muay Thai, I organize beach dodgeball tournaments, et cetera. My centers of interest and inspiration tend to be multifaceted, as I have this urge to try out new things and explore the unknown, even when hostile. My approach to culture, in the broadest sense of the word, is identical.”

He admits it’s less about individual works themselves than the way people respond to them that interests him most. “I enjoy discovering what inspires passions, with their fascinations and contradictions, regardless of the field of interest,” says Wuthrer. “One could say that I’m a bit of an amateur anthropologist.” This outlook bleeds into his expectations for Don’t Kill Her, as well: “The game’s underlying message is open to interpretation, and the hidden meanings it aims to convey are numerous. As a matter of fact, I’m really looking forward to discovering each and every player’s interpretation.”

Cast your vote on Steam Greenlight and help make the game a reality at Indiegogo. You can also check out more of Wuthrer’s pencil drawings on his Tumblr blog.