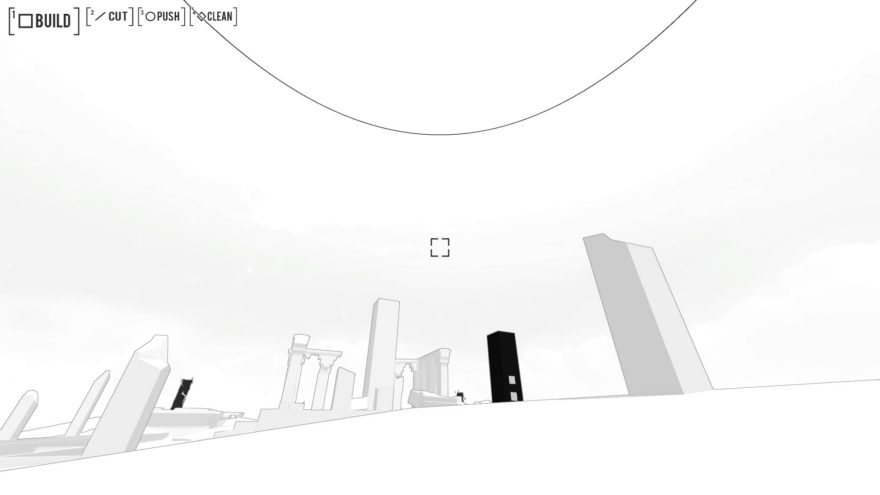 I have bizarrely fond memories of playing around with Bokida when it was first released back in 2013. Bizarre because, at the time, the game was only a limited prototype. But there was something about its openness and the toy-like expressions its world allowed. It gave you a vast white landscape with only a few landmarks to break it up—a trench and a temple-like structure, if I recall—but you could place colorful cubes, cut them up, and push the slices around to create a right old mess. It was like a properly physics-based take on Minecraft (2011) that invited you to delight in destruction as much as creation, set in a world that was surprisingly intriguing given how spartan it was.

“playing with an entropic system”

Turns out I wasn’t the only one who saw something special in Bokida‘s prototype. It was made by a team of French students as their graduation project for a BSc in Game Design at the ICAN school in Paris. I presume they passed with flying colors given that, since its release, the prototype went on to pick up a Gameplay Award, selected to be shown at the Notgames Fest, and given an honorable mention at the IGF 2014. This round of attention is what prompted its creators, known collectively as Rice Cooker Republic, to turn that prototype into a larger, full game. Wisely, they started off simply.

“The idea at the time was to refine [the] basic set of interactions to create a more precise and rewarding way to cut and sculpt the digital matter,” Vincent Levy told me, one of the designers and the writer on Bokida. “We liked the idea that you could play with this matter, that it would react to the game world’s physics (bolstering the playfulness of it all), and thus that you would find yourself playing with an entropic system.”


What the game has now are four distinct tools for you to play around with: 1) a build tool, to place cubes, 2) a cut tool, that fires out a line that slices through your cubes, 3) a push tool that sends out a powerful force, and 4) a clean tool to let you easily delete anything you’ve created. You can get a feel for these tools in the game’s demo, downloadable on its website. The demo introduces each tool’s function clearly but what you want to do, really, is test out their limits for yourself. See if you can’t make the game shudder under the weight of its own physics engine. Once I got to the outside area I had great fun just stacking up a tower of cubes all the way up to the invisible ceiling (a disappointing if expected discovery) and then sending a slice straight down through the middle of the tower I was stood on so that it collapsed into a pool of debris.

Bokida is still that toy I remember playing with, then, and an even better one now. But what its creators really needed to work out when expanding the idea is what to do with the world the game is set in. They had the tools from the start but they lacked a reason for players to spend longer with the game outside of messing around. “Early on, we introduced the concept of ‘interactive landscapes’, Levy said. “These would have been specific locations within the game world where the environment would react differently to some of the players’ abilities as a way to elicit playfulness.”

The idea of these locations spread around the game’s world was to encourage players to explore the possibilities of their tools in a way they might not have otherwise. The hope was that it allowed for an emergent type of play, whereby players are given a motive and left to figure out how to combine their abilities to meet its demand. From this the puzzle ideas that are in the game now have been derived. But fear not, for Bokida isn’t all about puzzles, in fact Levy emphasized that the team has ensured to keep the playfulness of the prototype intact. “For us [the puzzle-like sections are] mostly about accomplishing some sort of a ritual action that will induce transformations in the world of Bokida.”

“we conducted research into the Taoist cosmogony”

This leads us to the game’s story, which is another aspect of the game introduced in the demo. At its beginning, we’re made witnesses to a love story between two stars—a light and a dark one. They’ve been separated and your function as “messenger” is to figure out a way to unite them. In the demo, you get to experience the introductory chapter, making your way from the Dark Star to the Light Star. It ends just as the Light Star is about to reveal itself, after you’ve activated the three monoliths across the landscape. It’s after this point that the game apparently opens up a whole lot after the guided sections of the tutorial.

Rice Cooker Republic seems to have spent a lot of its time creating a sense of place since the sparse prototype. You get this straight away in the demo, passing from a large temple, to a forest, and then an infinite vertical structure that shifts its walls and floors behind your back. Levy tells me the team looked to real-world references when coming up with these areas and the landmarks in the larger parts of the game. Namedropped is the distinctive hexagonal pattern of Giant’s Causeway in Northern Ireland, which is practically recreated in the game. With regards to the temples and ruins in the game, their architectural details were drawn from places like the Chand Baori Stepwell in India and traditional burial grounds in Korea, as well as more widely recognizable sites like Stonehenge.

But it wasn’t only the carved shapes of the rocks and the engravings of these places that the team borrowed. They took on some of the cultural aspects for the game too. “As we crafted the game […] we conducted research into the Taoist cosmogony,” Levy said. “Immediately compelled by how we were able to draw parallels between the few elements we already had in our project and the broad principles of ‘Zao hua’ (which could be considered as a Chinese equivalent to ‘Creation’ but in the Taoist cosmogony) we were interested in subtly incorporating it in the overall structure of the game. This lead us to read many translations of the Tao Te Ching (or Dao De Jing, a fundamental text of Taoism) and to incorporate some of the meaning found in these words in Bokida, most prominently drawing from the key principle of non-action.”

My mind is filled with how these principles could play out in the game. The idea that a game about creation and destruction, about the unification of two stars (perhaps one dead and one alive), eventually leads you to realize the power of “non-action” seems like it could be powerful. We’ll have to wait and see what Rice Cooker Republic manage to pull off when Bokida finally arrives.

You can find out more about Bokida and play its demo on its website.