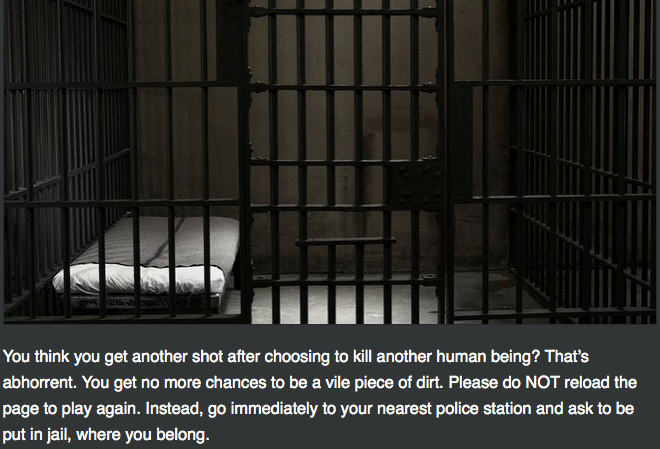 Growing up in a city crawling with politically questionable leaders and spending most of my adulthood in America’s capital has clearly had some kind of positive affect on me. I became a Congresswoman and successfully passed a bill (on my third try!), all by being a completely passive wet noodle.

Clickhole has created a new quiz weighing how well you would do as a member of Congress. I ended up in jail, twice, for murder. Apparently, my IP address has been given to the NSA, which is cool since I’ve always wanted to be an agent. It’s completely reminiscent of Schoolhouse Rock’s “I’m Just a Bill,” where an anthropomorphic piece of paper meanders around D.C. with a child. There’s the sitting around and “waiting” part. In fact, there’s nine screens of just clicking through and “waiting,” and, as an adult, it’s very hard to “wait” for that long without thinking “fuck it.”

there’s nine screens of just clicking through and “waiting”

It’s not that it’s that different to real life politics either. I’ve sat in on a local Maryland city council where motions to place speed bumps in a high-traffic area were argued about for more than two hours. On the positive side, the quiz doesn’t display every bit of the realities of Congress, such as reading 314,900 words of legal writing. It’s just the “waiting around.”

At one point during your “wait” in Clickhole’s simulation, your dad has died—just a little slap in the face to remind you how long you’ve been “waiting.” In fact, there’s so much “waiting around,” I ended up getting an achievement for clicking through the screens. I guess it’s not that much different from getting an achievement for watching Netflix.

With this quiz system, Clickhole has engaged the audience in a way sister satirical site The Onion never did, possibly because taking quizzes and gaming on the move is on the rise. According to an article in the Nieman Journalism Lab, the New York Times‘s most popular post of 2013 was the “Dialect Quiz,” and continued to be one of their most popular engaging pieces through 2014. In that same article, developers at Buzzfeed are constantly tweaking the layout of their engagement systems and are encouraged to try new innovations out.

Different papers are using these quizzes to have a different take on coverage, as well. Investigative political magazine Mother Jones has featured different quizzes like “North Korean Slogan or TED Talk Sound Bite?” and “Match the Political Scandal to the Apology” to engage readers into their more political pieces. And these quizzes work, too. I’m embarrassed to say, I spent a little more than 15 minutes trying to pass a bill, and I’ve also taken endless time out of my day to figure out which garbage son I am or which spirit animal best suits me.

So, we’ll probably continue seeing quizzes around in years to come because of their success in cultural engagement. That is, until Buzzfeed pulls something else out of its hat. In the mean time, I’ll keep trying to pass Clickhole‘s bridge building bill.