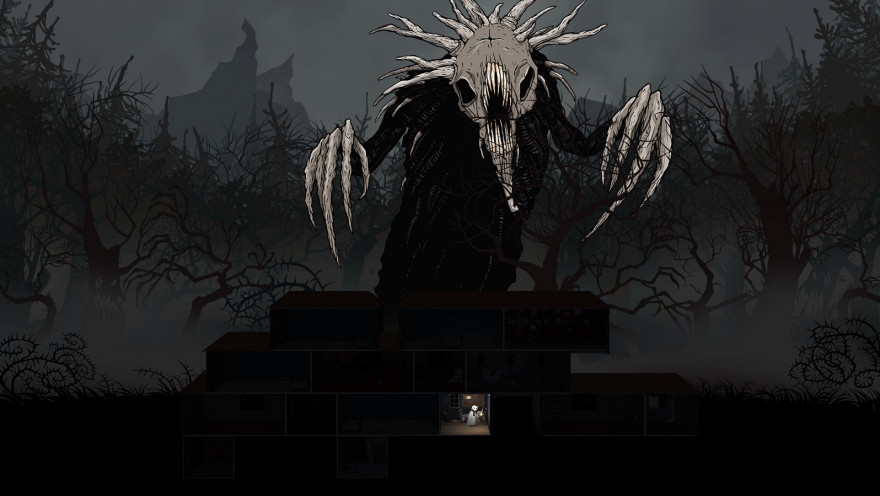 More than anything else, Knock-Knock reminds me of leaving my bed as a young lad and gazing down the staircase in the middle of the night. Spurred by the thought that I heard something—no, I definitely heard something—I decided to go exploring. Mostly, though, I just stared. The seconds crawled by. Minutes. Down near the end of the steps there was a small night-light shining bravely in the darkness, but I couldn’t shake the feeling that it was hiding something.

Stare long enough into the night, and the mind can will almost anything into existence. Sure enough, the night-light seemed to be getting dimmer… didn’t it? Those creaks I heard sounded an awful lot like footsteps… didn’t they? Strange sights and unexplained noises can appear out of nothing, but ghouls and ghosts, too?

They certainly do in Knock-Knock, a little house of horrors that, like Paranormal Activity did in film, amplifies the meaning of every sound you hear. Playing as a disheveled insomniac living alone in the woods, the set-up is ripe to illustrate the perils of letting the mind wander. In many ways, it succeeds: I’ve never stared so hard at a smartphone in my life, squinting unblinkingly in the hopes of making out trace outlines of the supernatural souls haunting my forsaken cabin.

In pragmatic terms, the goal is simple: Make it to dawn and survive the night. Our protagonist can’t sleep a wink with all the noises emanating from his surroundings, so much like anyone else freaked out in their own home at 1 a.m., he decides to go through every room, turn the lights on, and make sure they’re safe.

And for the most part, that’s what you do. Tip-toe through the dark, two-dimensional rooms, and fix light bulbs. All the while, windows break. Doors creep open or slam shut throughout the home. Your eyes adjust to the light when you stand in place, revealing furniture you can hide behind or clocks that can zip you faster towards dawn. You start to hear voices. They say they’re coming for you. When you finally catch the glimpse of something sinister lumbering towards you in a darkened room, there’s little you can do other than run or, if possible, lunge behind a dresser and hope it passes you by. Simply coming into contact with one can make you restart the entire level. 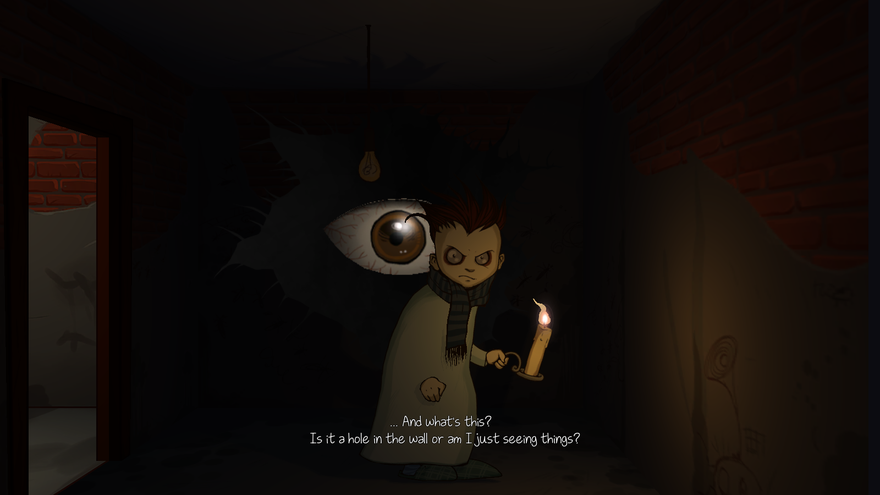 When all the elements come together, Knock-Knock is a gripping and suspenseful game of hide-and-seek, played by someone chasing out demons as much as he’s being chased by them. There’s rarely any indication that a monster is coming for you outside of what you can piece together contextually, meaning the game’s randomly generated methods leave you with only your own mind to trust. If the wild-haired protagonist is any indication, that’s not exactly a comforting thought.

At one point, I stood motionless before a darkened room, suspecting the ominous sounds I heard to reveal a ghost any second. After half a minute or so of staring intently, the voices started to dissipate. I decided then to venture into the room when suddenly a spirit lumbered out of the dark and ended my entire run. Another time, the voices told me to stay still, that they could see me. So I hid behind a cabinet. I still lost and had to start over.

If that scenario sounds frustrating and nonsensical, it is. During one of the protagonist’s rambling speeches, he insists that “nature is logical” even as the activity in his home contradicted his every word. The trick is to make a game in which everything is randomly generated by a computer feel otherworldly without being completely unfair—games are an exploration of systems, after all.

Look everywhere, listen to everything, study, document: It doesn’t matter.

While the mysterious rules governing Knock-Knock’s world do initially feel that way, they eventually reveal themselves willing only to obfuscate and confuse. Thematically, it’s clever, as even what you see and hear begin to play tricks on you. In practice, though, it begins to wear down the player about halfway in, especially as ghosts and spirits spawn near you when there is nowhere to hide, or block the only available exit.

At various points, a specific room in the house is highlighted: Why? Videogames have trained us to interpret this as a guidepost for important areas, yet sometimes I’d try to make my way there only to be sucked into an endless hallway and forced to start the night over. Occasionally, I’d be attacked by a monster. Still other times I’d ignore the room altogether and end up completing the level. Are any of my actions actually attracting the monsters to me? Nothing really makes any sense.

Ultimately, the title’s strange machinations make it both compelling and hands-in-the-air frustrating. When you are frightened needlessly in life, time moves forward inevitably and brings daybreak even as you hide under your bed sheets. In Knock-Knock, you’re not just battling your own fear; you’re trudging uphill, woefully unequipped, against an opaque system of rules that never exposes itself. Look everywhere, listen to everything, study, document: It doesn’t matter. You could still be left wide awake, perpetually replaying the same night over and over again—a true nightmare if there ever was one.