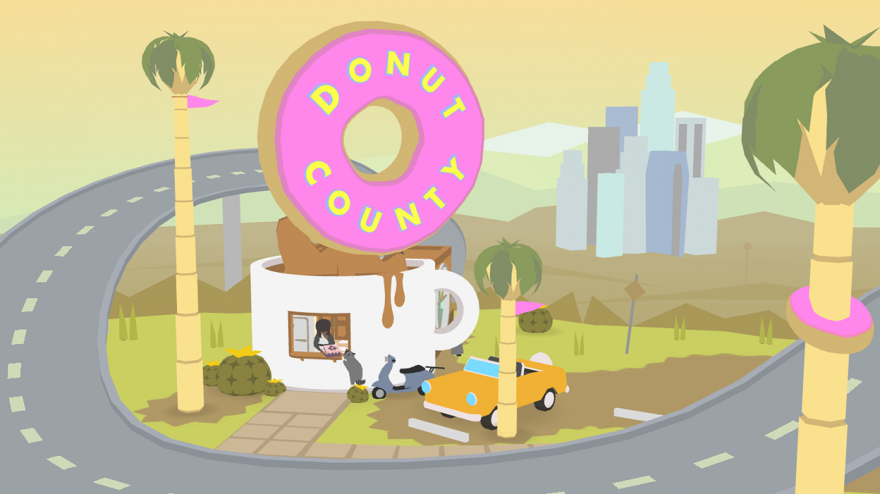 Here’s a riddle: what gets bigger the more you take away from it?

Holes are naturally paradoxical. How could negative space only add to something? At IndieCade two years ago, designer Ben Esposito (best known for his work in Unfinished Swan) took that paradox a step further in a game called Kachina. Recently renamed Donut County in its reveal trailer, this Katamari-inspired world focuses on a vacuous hole that only widens the more it consumes, gobbling up and spitting out everything from Pueblo totem poles to the planet’s big yellow sun.

Though seemingly innocuous, the concept of this physics sandbox game rings with a curiously ubiquitous truth: holes are weird, intriguing, and kinda scary. Whether it’s a terrifying, mysterious crater in Siberia or just a measly old rabbit hole, the human mind runs wild with what it can neither see nor comprehend fully. After all, we walk on this earth daily, depend on its solidity for just about everything. The idea that it could be dug up, made vulnerable, or possibly even collapsed beneath our feet leaves us feeling, well, pretty groundless.

Holes, like gaping wounds in mother earth, speak also to a sense of loss. On a metaphorical level, Kachina’s original title served as an allusion to the culture-consuming black hole that is the United States of America. Since its colonization, this “melting-pot” of a country has swallowed up countless more cultures than it ever protected, growing larger all the while. Nothing seems more emblematic of this phenomenon than the appropriation of a Native American pueblo religious symbol, the Katsina doll. Nowadays, wherever dusty and unpopulated highways exist in Southwest America, these sacred symbols are sold as over-priced trinkets named “kachinas” by the non-Native American artists who carve them.

California has always been a state in constant influx, riddled with cultural whitewashing.

At first, Donut County may appear to be a less politically-charged name. But, as Esposito told Venus Patrol, “When I moved to L.A. a few years ago, what struck me the most was that there is a different donut shop on every corner, and they’re all independently owned. That was really weird to me coming from New York, where there’s a Dunkin Donuts on every corner. New York City has been going through the process of gentrification for a while now, but I didn’t really connect that back to donuts, until I learned that Dunkin Donuts is now about to move into Los Angeles.”

The gentrification of California holds a particularly nasty resonance with the tech and—by extension—gaming industry. Last year, activists and displaced residents of San Francisco’s Silicon Valley area protested new Google and Apple employee-only bus routes. Aside from residential displacement due to the influx of wealthy “techies” flooding the district, the demonstrators were also protesting the use of exclusive transportation that took away money from public services.

Donut County seeks to capture this troubling aspect of Californian history, or in more recent decades, the rapidly constructed city of L.A. From gold rushes to gentrification, it has always been a state in constant influx, riddled with cultural whitewashing.

Though Esposito also admits that the name change was at least partially inspired by the fact that, “I love donuts!”

Donut County will be featured in Fantastic Arcade 2014 this September along with games such as David O’Reilly’s Mountain.