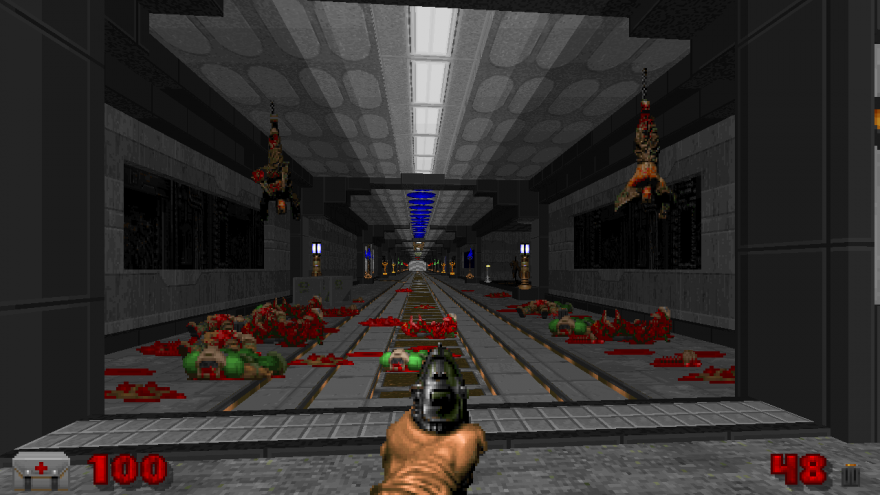 The first time I ever made a Doom map I simply created a few rooms and hallways, then added a couple of enemies and some ammo. But Ben Mansell created something a little more complex with his first Doom map. After 300 hours and over a year spent on it, Mansell is ready to unleash Four Site into the world. A map so large it will take most players two to three hours to complete.

Four Site is massive—essentially four decent-sized Doom maps put together. Each section has its own look and feel, and the pacing is unlike many modern Doom maps I’ve played. Modern Doom maps seem to focus on using more powerful hardware to throw bigger waves of enemies at the player. With Four Site, Mansell wanted to create a map that hearkened back to the older maps found in the original Doom (1993) and Doom II (1994).

But he was also inspired by another series of games: “If there was one big influence, it wasn’t Doom at all, but the Dark Souls series,” said Mansell. “Some of Miyazaki’s levels in the series are masterclasses in progression, non-linearity, and environmental storytelling.” He specified that a level like Tower of Latria from Demon’s Souls (2009) was perfect example of how to “unfold a level to a player.” Tower of Latria left an impact on Mansell, as he explained: “There’s a prison section later on in my map that in hindsight is pretty much a direct tribute to [Latria].”

The idea for the map has been in Mansell’s brain since 2003—it was then that Mansell, while in a college lecture, started doodling the idea for a Doom map. “Somewhere in my old lecture notes there’s probably a roughly drawn outline of the map!” said Mansell. But he never did anything with the idea until last year. He had no idea if he would even be able to make Four Site. He described the process as a “trial by fire.”

As said, it took him over 300 hours to put Four Site together, not to mention months and months of planning on paper. Some sections of the map came together relatively quickly, other sections, however, took considerably longer. One such section was an ascending tower found in the last part of the second section.

“Working out how to get the Lost Souls to teleport in at the right time at the right height (given Doom handles height in a rather limited way) took a lot of head-scratching,” Mansell said. “I ended up with a spreadsheet of different heights and formulas to work out where to position the Lost Soul spawn-points. That room alone probably took 30 hours or more to get right.”

With Four Site finished, Mansell has made the map available to anyone who has a copy of Doom II. He was surprised by the reaction the map got after posting it on Reddit. Within days it was being covered by numerous sites and being shared across Twitter and forums. As to why the map has become so popular, Mansell believe it’s partially due to nostalgia: “My map perhaps struck a chord by being so resolutely old-school yet still unusually large. It’s quite a traditional Doom map in some senses, following the kind of nonlinear, sprawling design principals many modern FPSs shy away from.”

Mansell wants to make another Doom map, but he’s going to take a break first. Instead, he is going to play maps made by other creators. “I’ve about six years of Doomworld.com Cacoward winners to catch up on, so I don’t think I’ll be short of amazing Doom maps to play any time soon!”

You can download the Four Site .wad here and use GZdoom, a modern sourceport, to play it.