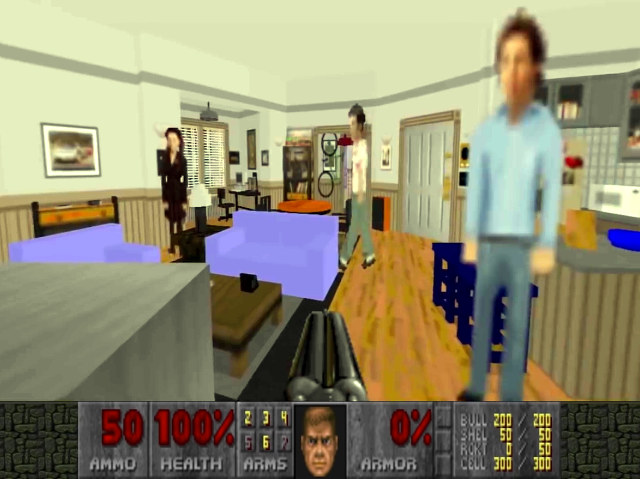 Here’s something you probably know: Doom II (1994) and Seinfeld (1989-1998) are both pieces of popular culture released in the 1990s. They both had huge audiences and now two decades later, they are still as well known as they were when Bill Clinton was in office. In fact, this year’s Doom was released to great reviews. And you can probably turn TBS on right now and catch an episode of Seinfeld.

But here’s something you probably don’t know: Doom and Seinfeld have now been coupled. Yes, thanks to the work of Doug Keener, it is now possible to explore Jerry’s famous apartment in Doom II (you can download his level here). It took over 100 hours of work to create this love letter to Seinfeld and the results are both impressive and a bit scary. (Fun fact: While Keener spent over 100 hours working on this level, the the total number of Seinfeld hours that exists is about 90).


I’ve been a huge fan of Seinfeld for most of my life, and the amount of detail put into the level shows that Keener either really loves Seinfeld or has hate-watched the show enough that every detail has been burned into his brain. Either way, the apartment is a near perfect recreation of the original. Which is made even more impressive by the fact he recreated it using Doom II.

This is not the first time that Seinfeld has made appearances in videogames. In fact, many people over the years have created mods that inject your favorite game with some classic Seinfeld. Like the mod that fully recreates the apartment and all of the characters in The Sims 4 (2014). Or the mod which adds paintings of George Costanza into Dark Souls (2011). Of course, if you want something more subtle, you could download the mod that adds a picture of Jerry Seinfeld to the side of a gun found in Team Fortress 2 (2007).

How much Seinfeld do you want to experience?

But Keener’s creation seems more complicated than any of these creations. It’s why I was curious as to how complex this .wad was (.wad is a file format used in Doom to generate the levels, textures, and sounds). So I opened Doom Builder and loaded the Seinfeld .wad up. What I found was mesmerizing. A strange and dense mess of lines and dots. Compare this to a map that shipped with Doom II, in this case E1M4, and you can see how surprisingly advanced this Seinfeld map is. The Seinfeld .wad won’t even run in classic Doom. You have to run the map in zdoom, a source port that allows levels to be bigger and more complex that the original Doom II could handle.

A gif that compares the Seinfeld .wad to a typical Doom II .wad

Of course, this is still Doom II, which means that you still have a shotgun. So if you feel like brutally killing the cast of Seinfeld off you can do that. They each have their own death animation and audio. But you can also just sit back and chill with the beloved characters of the show. And, as they do on the show, they’ll get up to some shenanigans as you watch. For example, Kramer walked on top of Jerry’s couch when I was playing. He just walked up onto the couch and started hanging out up there. What a zany character he is.

If you go looking for secrets you’ll find one. You can find Newman hanging out at Kramer’s apartment across the hall from Seinfeld’s place. Appropriately, Newman can be found in a monster closet. Which makes a lot of sense. Newman is a monster.

There isn’t much more to the Seinfeld .wad. There is no exit or door to unlock. You decide when to leave. You could, of course, decide to never leave. It’s up to you. How much Seinfeld do you want to experience? For me it was about seven minutes. And for those out there who have a desire to live in this Seinfeld meets Doom paradise, you can always load up the VR mod for Doom. Then pop on a VR headset and experience Seinfeld in virtual reality.