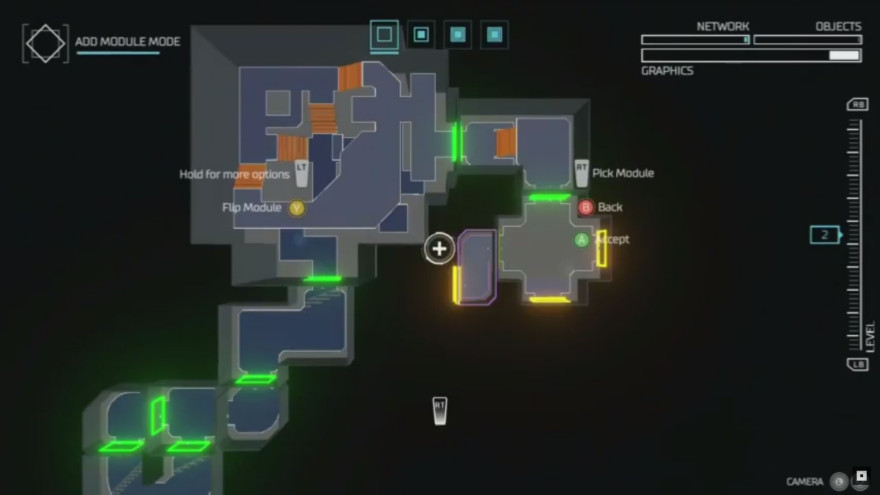 If you’re not busy snapping chest bones in Doom 4 once it’s out you can snap together your own maps and game modes. And let’s be clear: “snap” is apparently the keyword here. It alludes to the apparent accessibility of the game’s SnapMap feature. The boast from Doom 4‘s executive producer Marty Stratton is that “without any past experience or special expertise, any player can easily snap together and customize intricate maps.”

Here’s the translation: you can throw a bunch of oddly-shaped rooms together to make your own, better version of Doom 4. The appeal here is SnapMap’s module-based map editor. From a bird’s-eye-view, you scroll a menu to pick a room shape and plonk it down wherever you want inside the voidspace you’re given to work within. And, yes, these modules snap together if you want them to, so you don’t have to spend hours trying to line up contours by the millimeter.

a bridge between creative desire and technical know-how.

Once you’ve got a general outline of your map, you can head inside it with a 3D view, adding the usual Martian military facility decoration such as explosive barrels, metal crates, and burst gas pipes. Hopefully you’ll be able to change the color palette to make it a little less grey and brown too. Regardless, at least there’s some room to experiment on account of granting us the ability to edit game logic. Instead of programming with code, in SnapMap you can drag-and-drop pre-defined triggers, behaviors, and events to give your map a little bit of life. Or you can go a bit deeper and fiddle with custom commands to create new game maps and modes that can then be tried and tested with online players at the press of a button.

Of course, the community-based level editing that SnapMap enables is nothing new to the Doom series. Despite the original Doom games being released in the early ’90s, fans are creating new maps and tools for them to this day. Only last month “Brutal Doom”—one of the most popular Doom mods—got a new release, further ramping up the gore levels and give-a-fuck attitude by letting you kick severed limbs and heads, and rip demons in two with your bare hands.

But Brutal Doom isn’t representative of the entire voluminous oddity that is the community-made content of Doom and Doom II. There’s a Doom visual novel editor, a selfie stick mod, and so many bizarre maps that only a bot is capable of trawling them all (and even then it might not keep up). The appeal has and always will be the abstract level design possible with the original Doom format as well as the ease of swapping out 2D sprites with new, wilder iterations.

But what Doom has lacked over the years is a bridge between creative desire and technical know-how. That’s what SnapMap aims to resolve through its ease of use. As to whether the Doom 4 base it is being spread upon will allow for the more colorful aspects of Doom modding to thrive, well… one can only hope.