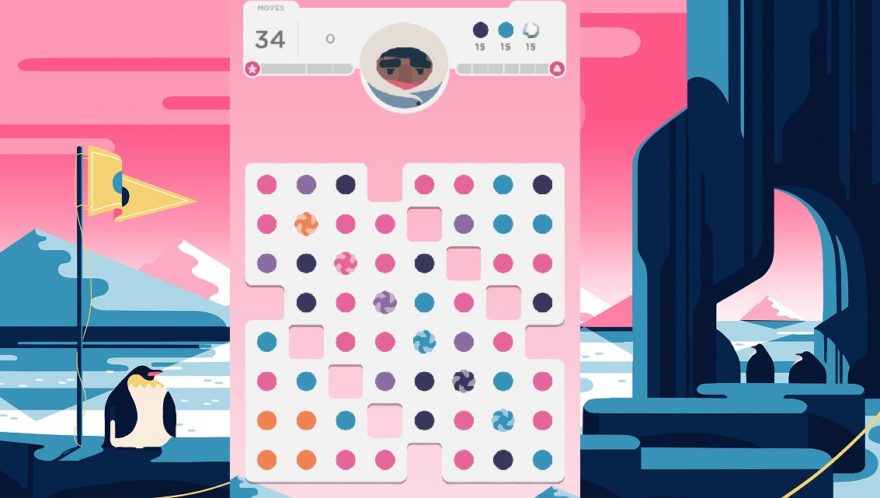 During the spring of 2014, a cloud-bearded pappy and his blushing daughter went on a quest to connect dots in dangerous places. A puzzle game with pleasant, sojourn aesthetics, TwoDots took players to volcanic peaks and icy depths, battling lava and thawing matching dabs of color. Some good stuff to keep idle thumbs busy, but at its lowest points felt like it had succumb to the atypical mobile dilemmas—a sinking feeling that the game was more than hard but rigged. Levels only guaranteed to be beaten with payable power-ups, and with attempts tied to a clock, later levels shifted from a game about wit to a game about patience.

With its new sequel, Dots & Co—due to come out for smartphones on July 21st—the dots have a chance to go on another mobile adventure. This time they are bringing along friends. Powerful friends.

Dots & Co can be your travel buddy

Beginning in a rec room, mounted with memorabilia from the last great voyage, the adventure around the pale blue dot we call Earth starts from familiar places. Connect dots of the same color to pop them. Create a matching loop of dots to wipe the entire color from the screen. Obstacles and stubborn layouts will test you, but the new cohorts are here to help.

Many of the stages are paired with new partners, each with a unique dot-related superpower. A penguin that can wipe off a color of its own accord. A polar local who can throw down paint grenades that will splatter fields of color. A bison that spits. Their abilities are activated with triangles scattered among the dots, and as the game goes on these skills elevate from boosters to necessities.

Power-ups are no stranger to Dots. In TwoDots you could previously throw dynamite and raindrops at each level. In Dots & Co they’re added elements to spruce up the game and, when you’re linking certain chains of colors and triangles together, enablers to godly moments.

It isn’t entirely free from the feeling that some levels come down to more luck than skill (though, the version I played is still being tweaked), and some of the new effects, such as a flower that will grow into neighboring dots and blow them up, makes Dots feel more like Bejeweled than ever. But this is the summertime, and many of us will be in cars, trains, and parks with a moment to kill and worse ways to do it. If you feel like taking a meta-vacation, a game about a vacation during your vacation, then sure, Dots & Co can be your travel buddy. Having a friend that’s luckier than they are bright can be pretty handy on the road.

Dots & Co is due to arrive for smartphones on July 21st.