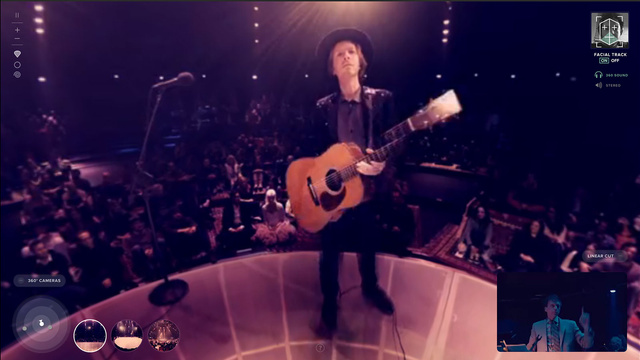 Back in the ‘80s—when MTV really was music television—music videos were just infiltrating mainstream America’s consciousness: video hadn’t yet killed the radio star. It was innovative, pioneering work; like all sui generis art forms, it eventually became ubiquitous. The zeitgeist is necessarily fleeting.

Chris Milk is the guy that’s quietly bringing music videos back from the brink of inescapable triteness, remaking them according to whatever creative visions torment him at night. Aside from sharing a wonderfully offbeat aesthetic, all of his creations—and there are quite a few—showcase a flair for depicting pathos in delightfully weird new ways.

Milk’s latest music video projects play with one of the central elements of gameplay: interactive nonlinearity.

Up, down, left right.

In his most recent production, Milk collaborated with Beck on a magnificent recreation of David Bowie’s “Sound and Vision”. In the video, Beck and Milk created an immersive audiovisual experience, using binaural sound and a completely novel 360° camera setup designed to put the viewer in the midst of the musicians. The video uses your computer’s webcam to determine where your face is with respect to the cameras onscreen—when your head moves, the camera moves with it. Up, down, left right. (In his previous interactive projects, Milk has constructed similar experiences, though none are quite so immersive as “Sound and Vision”.)

The nonlinear aspect of Milk’s interactive videos naturally echoes its equivalent in video games—his creations wouldn’t look out of place in a cutscreen sequence. It’s an interesting meditation on the confluence of ideas in new media; blurring the lines between accepted art forms is a time-honored tradition.